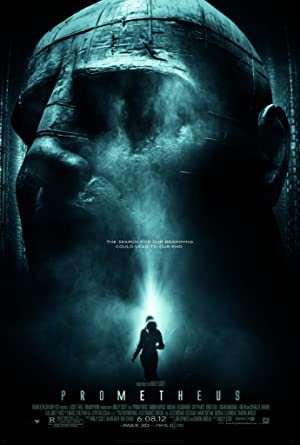 After all, it’s not only a prequel our beloved chest-burstin’ Alien series, but also a film that marks the return of director Ridley Scott to the franchise he created and the sci-fi genre he revolutionized with that movie and Blade Runner. Prometheus promised a long awaited comeback for the brand of thoughtful R-rated science fiction horror that has all but disappeared in recent years. Early trailers and viral videos provided fanboy boners (or fanboners?) worldwide as genre fans frothed at the mouth desperate to see Scott revive not just a dying franchise, but an entire genre. It seemed thematically ambitious, technically accomplished, and viciously visceral. A new cult movie waiting to happen and proof that blockbusters needn’t be aimed purely at tweens n’ teens (overgrown adolescents need are popcorn flicks too). Well folks, the message to be learned here is never to put too much hope into summer spectacle. Prometheus isn’t a bad movie, particularly compared with the expensive dreck that has been clogging up cinemas since The Avengers. However, this ain’t the holy grail we were looking for. Sure, it’s better than Alien Vs. Predator 2, but so is having your stomach ripped open from the inside by an acid-blood filled alien.

I’ll try to make that the last gratuitous Alien joke of the review because…well…this isn’t really an Alien movie. That’s not really “spoiler alert” territory. Ridley Scott has been saying that to whoever would listen for over a year, but no one was willing to believe him. After all, the space jokey and peculiar U-shaped HR Giger ship from the original film was all over the trailer along with whispers of an alien threat. Surely our beloved Xenomorphs would make at least a cameo appearance, right? Well, nope at least not in this movie. You see, this isn’t just a single prequel, but the planned start of a new trilogy. Hollywood doesn’t make movies anymore, they make franchises. So even though Prometheus was already tied to an existing moneymaking property, it had to be designed to set up sequels. That’s a real kick in the groin to viewers, because you can tell watching the movie that at one point the script was a stand alone prequel that got watered down to leave doors open for more movies out of simple greed. There are some compelling ideas here that are deeply spoiled by a tossed of ending, terrible dialogue, and unflattering comparisons to Alien that just can’t help but be made.

The story is about the crew of a ship named (wait for it) Prometheus, who discovered cave paintings suggesting that the secret of life could be found on the distant planet LV-223 (that’s not the planet LV-426 from the first Alien, ok nerds?). So they are sent off on a 2-year journey to the planet in cryogenic sleep pods while the ship’s resident android David (Michael Fassbender) wanders around, plans something secret, and models his personality on old clips of Peter O’Toole in Lawrence Of Arabia. Eventually they all wake up, led by Charlize Theron’s cold as ice captain, Noomi Rapace’s driven scientist and a collection of indistinguishable starship red coats sent out to slaughter. Rapace explains that the planet they are going to was identified in ancient cave paintings as the home to creatures who create humans know as engineers. They land on the rocky surface and discover what seems like an ancient, underground ruin with secret chambers packed with metal canisters that seem to contain the origin of life on earth. One problem though, it looks like those engineers had actually planned on heading back to earth to kill off their human experiments. They played god and then planned an apocalypse. The black goo in those containers is actually a sort of living biological warfare designed to kill off a planet. It was suppose to kill us, it accidentally killed them. Guess what happens when this spaceship full of scientists decide to play with the apocalyptic goo?

The central concept is intriguing, pulled out of the pages of HP Lovecraft about old gods who would one day come back to kill the new world. The monster threat in the film is similar to Lovecraft as well, an ever-shifting and evolving creature impossible to pin down and describe in any form. That’s not a bad route to go for the origin of the Alien, since it’s twisted figure and changing life cycle. And the Giger’s alien is a pretty good species to wipe out a planet given that it’s a perfect killing machine and even breeds by killing other life forms. The problem is that a connection between Alien and Prometheus is never officially made. That’s left open for the next two Prometheus movies that are apparently coming. All the hallmarks suggesting that’s what the black goo would turn into are there, right down to an absolutely astounding automated c-section scene that’s sure to induce plenty of gags this summer. Instead we’re simply left with the start of what might become the Alien mythos two movies down the line and a cliffhanger ending that needlessly leaves dangling plot threads that could have so easily been tied up. As an Alien prequel, it’s disappointing and that’s not the only problem.

The concept and structure of the Prometheus screenplay are decent. The characters and dialogue? Cardboard and at times, unbearable. Confusing gaps in the narrative constantly pop up as the result of last minute rewrites and the endless discussion about the gods gets wearisome quickly. Filled with corny one-liners and grand speeches in the place of the small talk-focused working class characters of the first Alien and with an overreaching sprawling narrative replacing terse minimalism, it’s not he movie we all hoped Sir Ridley would produce. Instead, it’s something that seems to suggest the director didn’t know what made that film work. However, if you can divorce yourself from expectations and compare Prometeus to other contemporary blockbusters rather than that 1979 masterpiece, it’s pretty damn good. Scott knowns how to paint pretty pictures and creates a wholly realized world with masterfully crafted sets and grisly, unfathomable creatures. The horror set pieces that work are genuinely gripping, more so than any Hollywood scare flick put out in years. Scott may have issues with storytelling, but he knows the craft of filmmking better than anyone and on a technical level Prometheus is easily one of the most impressively realized science fiction films in quite a while. He’s also good with actors and while the supporting players and Charlize may struggle with half baked characters, Rapace proves to be an outstanding tough girl heroine and Michael Fassbender gives a creepy robotic performance that might be the best android of the franchise (which says a lot given that Ian Holm and Lance Hendrickson proceeded him) and could even be an awards worthy role.

Prometheus promised a long awaited comeback for the brand of thoughtful R-rated science fiction horror that has all but disappeared in recent years.
REVIEW SCORE
6
File Under: Charlize Theron