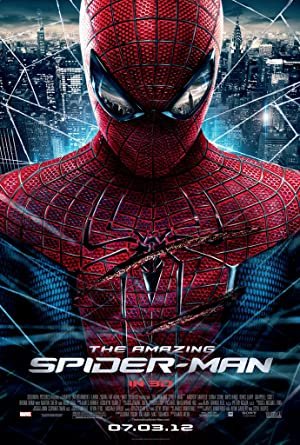 Given that this summer movie season is defined by superhero movies with the juggernaut that was The Avengers kicking things off and the The Dark Knight Rises on the way, The Amazing Spider-Man should be hitting screens with a similar level of tongue wagging fanboy anticipation.

Yet somehow, that’s not really the case. It should be since ten years ago Spider-Man’s record breaking box office run was what kicked off the current superhero movie renaissance and if Sam Raimi had been allowed to return to atone for the dreadful Spider-Man 3, we can guarantee the Comic Con crowd would be desperately counting down the days to release. However, Raimi walked away from the project fearing another heavily compromised outing after the last time and 500 Days Of Summer director Marc Webb was brought in (presumably because of his last name) for a hastily thrown together reboot. The project seemed cursed by fans from the beginning, but now that the film is finally here the good news is that it’s…fine. The Amazing Spider-Man is in no danger of replacing Spider-Man 2 as the definitive cinematic treatment of everyone’s favorite wall-crawler and it’s certainly plagued with all the problems of a rushed production, but enough works that the pieces are in place for strong sequels with a more carefully chosen directors and the necessary time to fully develop a script. Not exactly raving praise, yet considering all the trepidation and predictions of doom surrounding this thing, it could have been so much worse.

First off, one of the unavoidable bummers of the movie is that it’s an origin story and we’ve got to go through those motions again. Given that Spider-Man’s origin has been told countless times in every conceivable form of media, you’d think it could be assumed everyone knows what made the high school geek a superhero. Unfortunately it happens all over again here with minor changes so insubstantial they’ll irritate purists without even raising the eyebrows of anyone else. Andrew Garfield stars as Peter Parker 2.0, he’s not a nerd this time though, just an outcast with a hoodie he uses to distance himself from the world when necessary. It’s sad to see the geeky teen of the Tobey Maguire franchise and Stan Lee origins disappear, but Spidey/Peter became a wiseass loner fairly early on in the comic book run, so it’s at least true to that iteration of the character.

There are suggestions that Peter’s deceased parents were involved in some sort of conspiracy even though that’s barely explored. He’s with Aunt May (Sally Field) and Uncle Ben (Martin Sheen) now and we all know how that story turns out. Effort is made to avoid the exact beats of the Stan Lee/Sam Raimi origin, even though it’s ultimately the same. Doc Connors may create the radioactive spiders for Oscorp now, but they still bite Petey and Uncle Ben gives so many speeches telling Peter “with great power comes great responsibility” without saying those words that you’ll wish he’d just shut up and drop the iconic phrase. Sheen is pretty dull as well and thankfully this version of the story doesn’t deviate so far that Uncle Ben isn’t killed. So if you get irritated by Sheen, don’t worry. Just stick around and he’ll be gone soon enough.

Trying to find out who his parents were, Peter sneaks into a lab to confront their former associate Dr. Curt Connors (Rhys Ifans) and in a coincidence that only bad screenwriting can provide, Parker’s crush Gwen Stacey is working at the lab even though she’s still a high school student (don’t ask, just go with it. It at least speeds things up a bit). For the first 45 minutes or so, we follow Peter around in his emo high school existence and he doesn’t even have to fight for the girl this time, she’s into the silent n’ kind type (really? Peter Parker high school ladykiller?). Then just when you’re about to forget this is a Spider-Man movie Peter finally gets bitten and in one admittedly awesome accidental subway fight scene discovers all of his powers at once. When Spider-Man finally enters the picture, the emo high school movie the studio execs probably assumed the Twilight crowd would love mercifully disappears. The movie peaks during the early Spider-Man days with Webb primarily using stunt man on wires to bring to life Spider-Man’s early thug bashing ways in a visceral, physical manner that works quite well. Unfortunately that doesn’t matter much when he ends up having to fight a giant CGI lizard during the second half of this butt-numbing two hour and twenty minute film. Pit a stunt man against a big cartoon and it’s going to look fake every time. Thank god this is a comic book movie.

What Webb gets right are the early Spider-Man action scenes and his less nerdy/campy take on Peter Parker that defines a more grounded version of the character. Whenever the movie tries to go too dark into Batman Begins land (particularly with the mystery parents subplot) it feels a little inappropriate for the more fluffy, poppy superhero. Fortunately physical gags and sarcastic one-liners are never too far away. The movie doesn’t have Raimi’s goofy tone and at times that’s missed, but the new take at least has promise. Garfield is an ideally cast Peter Parker. He can be award enough to be an everyman while still feeling like a believable action hero when called upon for ass-kicking (which always required some suspension of disbelief in the Tobey Maguire era and worked only because of Raimi’s trademark goofball/cornball tone). Emma Stone essentially plays every teen boy’s fantasy, but she does it well with gentle humor and has great chemistry with Garfield. These two casting decisions and the general tone were the most important element to nail in The Amazing Spider-Man as it’s essentially a pilot episode for a new franchise. Thankfully, Webb got it right and the tracks are laid for decent sequels.

Unfortunately, that strong core is still surrounded by problems. Without any of the camp humor of the previous Spider-Man movies the teen drama cheese can have a soap opera feel that doesn’t do the franchise any favors. The rushed production can also be felt at all times. The script is filled with massive holes clearly as a result of stitching together a script on the fly and trying to cut this thing down under three hours (Ex: Spider-Man spends a good twenty minutes desperately hunting down the guy who killed Uncle Ben before mysteriously stopping and the lizard unleashes gas to turn huge chunks of New York into lizards, but we never actually see those involuntary human/lizards do anything. Surely an army of lizards roaming New York would do something interesting?). Compared to the fantastically rendered Hulk in The Avengers, the Lizard is an ugly CGI mess (there are even some lip sync issues) that doesn’t for a second look credible in live action setting and the typically comedic Rhys Ifans never quite nails either the boy scout scientist or super villain sides of Doc Connors.

Yet, even though The Amazing Spider-Man is a bit of a mess and clearly a product of corporate filmmaking, it’s still better than Spider-Man 3. This thing won’t be remembered a classic, but once someone applies these elements to a more tightly scripted second adventure, this new take on the franchise could take off. Garfield is a great Spider-Man and while he might never get a filmmaker as aligned with the character as Sam Raimi to work with, it’ll be interesting to see where things go from here. If Spider-Man had to be rebooted and there’s absolutely no way the character could return to the Marvel Studios label, I suppose this is as good of a direction to go as any. It’s not the happy-go-lucky 60s Spider-Man of the Raimi era. This is more in tune with the Spidey of the 80s era of Marvel Comics. That at least means that Venom and/or Carnage could actually work this time around and let’s hope someone who actually loves that villain gets a chance to pull it off.

Yet, even though The Amazing Spider-Man is a bit of a mess and clearly a product of corporate filmmaking, itâ€™s still better than Spider-Man 3.
REVIEW SCORE
5
File Under: