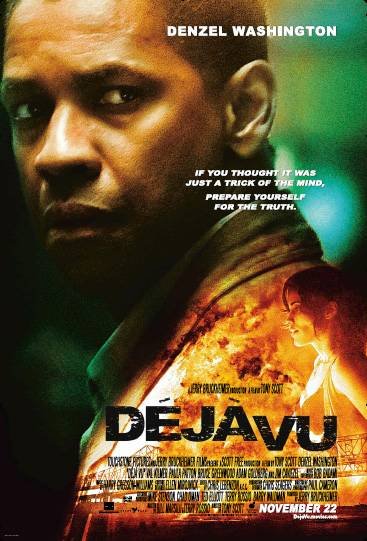 Lousy movie studio promotions promised me that this movie would unlock the secret to déjà vu, but it didn’t; déjà vu is as much a mystery now as it ever was. And what’s worse is that they beat the joke to death as the film begins by unfurling the Touchstone logo only to take it back and do it again. Déjà vu! Get it? Whatever. On the bright side though, the movie titled Déjà Vu is a perfectly well-made and occasionally interesting sci-fi action thriller that is simple enough that it doesn’t degenerate into a convoluted mess.

Denzel Washington plays ATF agent Doug Carlin, who’s called in to help investigate a ferry explosion that killed over 500 people in New Orleans. A vital clue in the investigation comes in the form of one victim’s body, a woman named Claire Kuchever (Paula Patton). The evidence indicates that Claire was killed mere minutes before the explosion, burned by the same accelerant used in the bomb and dumped in the river so as to look like a bombing victim.

Claire being the only clear lead, Carlin is recruited by the shadowy Agent Pryzwarra (Val Kilmer) to become part of a top-secret “surveillance” unit. Pryzwarra’s story is that the footage comes from a group of orbiting satellites that can cover an area from every angle, but the footage takes four-days and six-hours to become viewable. In truth though, this secret government division accidentally stumbled upon a way to literally look back in time four-days and six-hours, and under certain conditions, they can send objects back in time as well.

Now time travel movies are sticky wickets because you’re crossing an Einstein-Rosen bridge from concrete reality to a more speculative shore. Pretty much the only movie that was able to walk that fine line well was Terry Gilliam’s Twelve Monkeys, which was pretty heady, not just in the subject matter, but in the way the Gilliam treated time and circumstance as inevitable, even for a time traveler. Like Gilliam in Twelve Monkeys, director Tony Scott handles everything in a believable way, firmly establishing the rules of the device and carefully laying out the loopholes therein.

The nature of Scott’s time machine creates a number of potential pitfalls as much of its action involves Carlin and the crew simply watching Claire’s life like some sort of Truman Show, looking for clues. On the other hand, it also provided some great intensity and genuinely innovative car chase sequences as Carlin follows the terrorist Oerstadt (Jim Caviezel) from four-and-a-half days in the future. The film holds up pretty well by sticking to the Gilliam formula and incorporating how every time the characters try and change the past, they just end up assuring that events unfold they way they do.

But of course the whole thing manages to wrap up in a convenient contrivance; lucky breaks going the character’s way right when they need them. It also took a while for the movie to fill us in on the time travel angle, considering the trailer gave as much away. And while I know that this was the first movie shot in post-Katrina New Orleans, did we really need the constant, none-too-subtle reminders like bad guys hiding in the flood ravaged neighbourhood shambles or the impossibly wet streets. While we’re at it, how come every movie that takes place in New Orleans takes place around Mardi Gras?

All right, all that stuff was petty. But working in Déjà Vu’s favour is the fact that it’s a solid thriller with a charismatic leading man in Washington. Most movies wish they had this much going for them.

Déjà Vu is a perfectly well-made and occasionally interesting sci-fi action thriller that is simple enough that it doesn’t degenerate into a convoluted mess.
REVIEW SCORE
7
File Under: