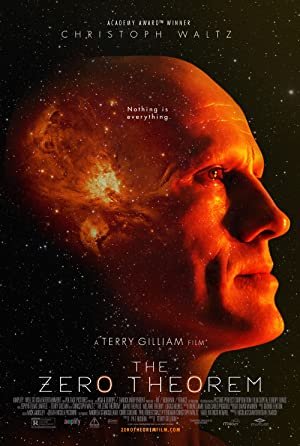 Terry Gilliam is quite possibly the most underrated filmmaker of his generation. After providing the animation and visual aesthetic for the Monty Python comedy troupe in the 60s, Gilliam went on to deliver a wide array of distinctly bizarre films like Time Bandits, Brazil, The Fisher King, Twelve Monkeys, and Fear And Loathing In Las Vegas. He’s at once completely irreverent yet deeply philosophical, an entertainer who strives for art, a man who dabbles in genres with little concern for their rules, and a visual stylist who somehow rarely lets the visuals overwhelm his ideas.

Yet, despite the fact he’s been one of the most consistently creative filmmakers working for over 30 years, he’s rarely considered a major filmmaker. His movies tend to be too messy and funny for high-minded folks to take them seriously and often demand multiple viewings to make a full impact. All of that brings us to The Zero Theorem, Gilliam’s first film in four years that for some reason won’t be playing in theaters. Despite starring two-time Oscar-winner Christoph Waltz and offering a glorious visual experience designed for the big screen, it will be premiering on VOD and Blu-ray. That’s a real shame for Gilliam, but at least it was made at all. That’s a reoccurring challenge in this director’s career.

The Zero Theorem feels very much like Gilliam’s possible masterpiece Brazil as it’s a vaguely existential study of a man alienated by technology in a vaguely dystopic future. That man is played by Christoph Waltz, and he’s a button pusher obsessed with his own mortality who is assigned to solve the mathematical equation the zero theorem, which could theoretically provide the meaning (or lack thereof) to the universe. Amidst that central thread, Waltz is surrounded by the usual gang of Gilliam-flavored eccentrics like David Thewlis as a Python-esque office drone, Melanie Thierry as a digital sex worker with a philosophical heart of gold, Matt Damon as a silver haired ruler of big business/society, and Lucas Hedges as Damon’s son, a boy genius/computer whiz.

As you might have gathered, there are perhaps too many threads competing for attention in Zero Theorem and not enough focus. Well, that’s absolutely true and it’s a consistent problem/strength in all of Gilliam’s work. He’s never been much of a concise storyteller. He’s more of a filmmaker who cracks open his brain and spills out every possible idea he might have about a certain theme, hoping that at least some of it sticks.

The biggest problem with The Zero Theorem is that it’s too much of a good thing. After multiple viewings and a great deal of thought, the film might eventually slide into clear and concise focus, but I kind of doubt it. The movie is a bit of a mess, yet it’s at least a movie that suffers from being too ambitious and that’s always at least admirable. What the film does offer is a flurry of brilliant concepts and images in search of a focus. Gilliam’s neon-lit future filled with an overwhelming array of advertisements and images is a brilliant satirical extension of our own time. It’s a world where people are more interested in examining their favorite screen than participating in life and that’s certainly a world worth exploring these days.

Gilliam also brilliantly visualizes Waltz’s existential math equation as a sort of building block video game that is impossible to solve without creating new and deeper problems. It’s a clever way of visualizing a very non-visual central conceit and one that only Gilliam could have dreamed up. The supporting roles like David Thewlis’ surreal office manager or Tilda Swinton’s digital psychologist provide some of the distinctly irreverent humor that Gilliam has peddled since Python. Finally, it’s an entertaining pop sci-fi movie that preaches the meaningless of the universe in a disturbing yet carefully thought out way that rarely appears in such a goofy movie. That ultimately makes The Zero Theorem a delightfully bitter little pill to swallow (much like Brazil).

So, this is definitely a film very easy to admire and one that is filled with wonderful sequences to tickle the eyes and feed the brain. It’s proof that glorious visual filmmaking need not lack substance and that philosophical films need not be boring. It’s hard not to fall in love with the many ingenious bits and pieces that Gilliam dreams up throughout the running time, but also equally difficult not to feel somewhat disappointed when it doesn’t quite all add up by the time the credits roll.

Still, the good in The Zero Theorem far outweighs the bad. It’s a movie very much worth seeing and one that demands to be seen by any fans of the director if only because it provides a hit of pure, undiluted Gilliam. Given how visually inventive and beautiful the film is, it’s a shame that audiences won’t get a chance to see it on the big screen, but at least they’ll get a chance to see it at all. This is hardly a commercial or conventional movie and God bless Gilliam for continuing to dedicate his life to such endeavors even as he enters retirement age.

All of that brings us to The Zero Theorem, Gilliam’s first film in four years that for some reason won’t be playing in theaters.
REVIEW SCORE
7
File Under: Comedy, Dystopia, Marvel, Matt Damon, Science fiction