Despite serving up plum roles for a pair of contemporary stars and coming from one of the most promising filmmakers of the moment, there’s something delightfully old fashioned about writer/director Richard Ayoade’s The Double. It’s one of those identity crisis existential horror/sci-fi movies that were all the rage in the heady art cinema days of the 60s. The film comes from a novella by Dostoevsky and features styles and techniques pulled  Roman Polanski’s The Tenant, Terry Gilliam’s Brazil, and Orson Welles’ The Trial. Yet it somehow also feels very much like a film of the moment. It’s a nightmare movie that crawls under your skin, while also proving to be one of the funniest features in theateres at the moment. Thematically, the flick is not an easy sit-through and yet Ayoade somehow makes it play as pure pleasure through his delightfully sardonic humor and cynical worldview. I guess you could call it a movie comprised of contradictions and a wonderful one at that.

Jesse Eisenberg stars as a cog in a soulless bureaucracy reminiscent of Brazil. He’s a socially hopeless loser whose only pleasure in life is creeping/spying on his neighbor Mia Wasikowska for whom he feels a deep personal connection despite barely being able to string two sentences together when they converse. Then something happens that makes Eisenberg’s world go all topsy-turvy. A new employee pops up in Eisenberg’s office who is his exact physical double, but is strong in all the ways he is weak. Eisenberg 2.0 is sarcastic, cutting, hyper-confident and a huge smash in the office and with the ladies. Eisenberg 1.0 forms a friendship with his doppelganger hoping that some of those social skills will rub off on him. However, Eisenberg 2.0 just uses the opportunity to take advantage of his double, stealing work to rise through the office ranks and even stealing away Wasikowska. On top of that, Eisenberg 1.0 also sees a man commit suicide across the street from his tiny apartment and starts to think that might not be a terrible solution to his problems. Cue a 90-minute nightmare of existential angst and paranoia, along with far more laughs than should theoretically be possible to mine from such material.

Richard Ayoade burst out of the gate as a unique voice as the writer/director/co-star of the brilliant trash horror parody Garth Marenghi’s Darkplace and has been only growing in maturity and ability as his career wears on. His cinematic debut, Submarine, was a sweet, heartfelt, and surprisingly dark coming-of-age comedy, but The Double takes his skills to another level. With a cast populated by comedy gold like Eisenberg, Chris O’Dowd, Wallace Shawn, and the incomparable Chris Morris, the film can be as funny as anything he’s ever done. And yet, it’s also as deeply unsettling and complex an experience as the source material suggests. As a director, Ayoade thankfully has the skills to pull it off. He creates a harsh, uncompromising world completely divorced from our own beyond satirical similarities. When he plunges into the nightmare section of the film, he shoots through subjective techniques that cram the audience into Eisenberg’s fractured headspace in a way that can be deeply disconcerting and affecting. In Eisenberg, he also found an ideal (co)lead, with each personality tapping into his two established onscreen personas (an impossibly awkward dork and raging egoist respectively) in a performance that milks the actor’s comedic and dramatic chops for all their worth.

The Double is a wonderful little movie as viscerally enjoyable and brain-tingly complex as you’d hope. When or how it will ever get a release is a reasonable question, but it’s the type of movie destined for cult appreciation and that sort of flick that tends to be discovered by fans rather than handed to them. Marketing a comedic existential art horror film is no easy task despite a pair of movie star faces to slather all over trailers and posters. Still, it’s more than worth checking out if you’re a fan of dystopic sci-fi, existential art house fare, or deadpan comedy (if you somehow love all three, say hello to your new favorite movie). We all knew that Ayoade could make mocking, failed horror after Darkplace, but the fact that he’s actually got a gift for atmospheric dread once the irony is removed qualifies as a pleasant surprise. Hopefully this is a road he decides to tip-toe down again because the man has an undeniable knack for it and it would be a shame for him to ditch it in the name of crowd-pleasing, even if that would probably be the best course of action for the sake of his bank account.

The Double is a wonderful little movie as viscerally enjoyable and brain-tingly complex as you’d hope. 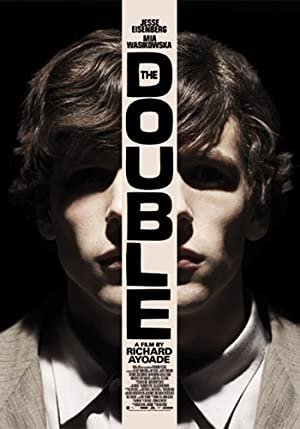