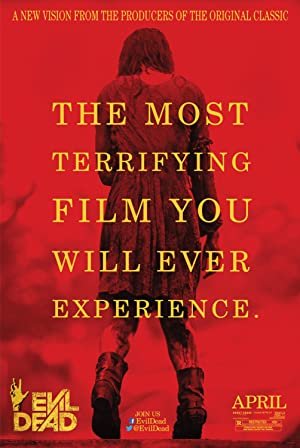 For the Comic-Con crowd, The Evil Dead series is very nearly the Star Wars trilogy of horror movies.

Between 1981-1992 Sam Raimi, Bruce Campbell, and Rob Tapart created three classic slices of horror entertainment. The Evil Dead is the ultimate low-budget splatterfest, Army Of Darkness reinvented the Ray Harryhausen medieval monster mash for the ironic comedy era, and Evil Dead 2 is a near-perfect mixture of those gorehound and wink comedy tones. They may all just be brainless B-movie bliss, but you’d be hard pressed to find three better examples and the instant cult movies have become iconic over the ensuing decades. Once the relentless horror remake trend ran out of 70s classics to repeat and slid into the 80s for source material, Evil Deadheads feared that Ash’s antics would be soiled by CGI for a new generation. It was inevitable that this Evil Dead remake would happen and the good news is that the franchise is far from ruined. Fede Alvarez’s Evil Dead might not be as memorable, insane, or entertaining as the original classics, but it thankfully doesn’t embarrass the brand name either. Raimi, Campbell, and Tapart supervised this remake themselves and ensured that it at least feels like part of the family. Against all odds, the 2013 edition of Evil Dead is actually worth a peek for horror fans with reasonable expectations and as an added bonus, if it does well at the box office Raimi will finally take a break from blockbusters to deliver the endlessly awaited Evil Dead 4. How much more incentive do you need?

Right off the bat, it’s important to note that this is a remake of the first Evil Dead movie, which is actually quite different from the sequels that defined the comedy/horror tone of the franchise. The original movie may have sparked uncomfortable laughs out of less-than-stellar acting and blood soaked excess, but it was meant to be taken fairly seriously and that’s the tone that first time filmmaker Fede Alvarez is after in his reboot. Following a pre-credits prologue with a family plagued by a familiar brand of mocking demon possession, Alvarez introduces us to the new generation of 20somethings heading out to a cabin in the woods and there’s not a Bruce Campbell goofball in the bunch. Jane Levy stars as a relapsed drug addict taken to an isolated cabin to face withdrawal along with her supportive brother (Deadgirl’s Shiloh Fernandez) and a handful of friends (Lou Taylor Pucci, Jessica Lucas, and Elizabeth Blackmore). There’s some tedious soap opera set up establishing all of their relationships before Pucci finds a mysterious book in the basement that has been bound in human flesh and inked in blood (it was never meant for the living). Because people in horror movies must do stupid things, he reads aloud some demon resurrection passages and before you can say “groovy,” Levy is possessed and locked in the cabin’s seller. She self-mutilates, spits blood, and mocks her captors/former friends. You see, before dawn the demons plan to possess them all and the only cures are total body dismemberment, live burial, or being set aflame. You know, that old story. Cue about an hour of relentless gory carnage.

The main flaws of Evil Dead 2.0 are in the plot and characterization. Sure the drug-withdrawal concept is ok and none of the actors truly embarrass themselves, it’s just unnecessary baggage for a movie that isn’t really about anything other than the ride. The added set up only really serves to slow things down and hammer home how irrelevant any sort of backstory is for this type of movie. It’s just slow, dull, and emo. Thankfully, Alvarez is smart enough to know this and the film seemingly forgets any of that happened when the possessions start. Once that happens, the actors really come into their own while playing tormented demons and the practical effects crew go crazy spreading gore around. If there are any CGI enhancements in this movie, I certainly didn’t see them. Nope, all of the tongue slicing, arm-chopping, flesh-biting, and nail-gun slaughter is done with make-up effects instead of CGI and the results are pretty spectacular. Quite simply, this is the hardest R-rated Hollywood horror movie in quite some time and it’s a delightful surprise that the MPAA let it pass uncut. Squeamish viewers will have a hard time sitting through the bloodbath that takes up the bulk of the film, yet it never feels like a vomit-inducing endurance test like a Saw movie. As relentless as Alverez’s movie can be, it’s never mean spirited. It’s a carnival ride that will have willing audiences screaming and applauding along until the sky literally rains blood in the finale.

The remake is dripping in references to the original flick from Raimi’s classic Oldsmobile rotting out front of the cabin suggesting this could be a long delayed sequel, to the identical cabin production design, and the post-credits Bruce Campbell sting. Most of the major events are repeated (yes, including the infamous tree rape) and yet, it feels like a different beast. Aside from indulging in a little evil force steadycam, Alverez never apes Raimi’s visual style, there’s very little tongue in cheek comedy, and even the book of the dead lacks the face we know so well. It’s a more hard-edged demons-in-a-cabin tale of terror filled with nasty surprises and plenty of dismemberment. That’s both a blessing and a curse. It makes the movie undeniably intense and yet without a madcap hysteria to reach in the closing scenes, at a certain point all the grue-slinging becomes tiresome. Without getting into spoilers, there are also a few ludicrous plot twists tossed in as Alverez barrels to his conclusion that could have benefited from some winking humor since they are impossible to take seriously. It’s not as tight a movie as the original Evil Dead nor is it nearly as novel. If you’re expecting a movie that feels like the logical extension to this franchise for the 2000s…well, pray for a Raimi/Campbell sequel cause you won’t get it here.

Now, all that said, Evil Dead only really feels disappointing if you expect it to live up to the original classics. That’s just not an attitude than anyone should bring into the theater with them when sitting down for a remake. This isn’t a movie like John Carpenter’s The Thing in which a filmmaker fulfilled a dream by updating/improving a childhood favorite. Nope, it’s a movie that exists because there were profits to be made. Judged against the previous remakes like Zack Snyder’s Dawn Of The Dead and contemporary studio horror movies, Evil Dead stacks up quite well. It’s gory, gross, frightening, visceral, unrelenting, and a hell of a lot of fun. Even with all the plot holes and moments of stupidity, that’s an experience that’s sadly hard to find in Hollywood horror these days. If you can set aside your Evil Dead love and try to look at this thing objectively as a contemporary American horror film, then it’s a blast. Plenty of fanboys will dismiss it for all the ways it departs from the source, but for everyone else (especially those with a love for glorious rubber gore) this thing is a riot. Evil Dead 2013 might not be a new classic, but at least it doesn’t damage the legacy of the series. It could and should have been so much worse. That fact that’s it’s actually worth watching is a bit of a miracle and enough to make Fede Alvarez a filmmaker worth watching once he is able to get his own original projects. Now it’s time for Raimi and Campbell to slap on their chainsaws once more and show the kids what a real Evil Dead movie is. Let’s just hope this one deservingly makes enough money to finance that horror nerd wet dream. We all deserve it for our loyalty alone.

Now it’s time for Raimi and Campbell to slap on their chainsaws once more and show the kids what a real Evil Dead movie is. Let’s just hope this one deservingly makes enough money to finance that horror nerd wet dream. We all deserve it for our loyalty alone.
REVIEW SCORE
6
File Under: