After directing a slew of oddball pictures—which include two Step Up sequels, two Justin Bieber documentaries, a G.I. Joe sequel and one of the worst reboots/adaptations of an intellectual property ever made in JEM and the Holograms— Jon M. Chu has had the redemption story of a lifetime with the terrific Crazy Rich Asians. His latest film, In The Heights, based on Lin-Manuel Miranda’s hit Broadway musical, is not only Chu’s best work, but the best film of the year so far, giving theatre-hungry audiences pure movie magic that cannot be experienced anywhere else but on the biggest screen possible.

Movie musicals are the most cathartic form of cinema you can ever get. When a perfectly tuned and pitched voice magnificently complements the moves of a dancer and magically inserts itself with the song’s rhythm, it creates an exciting overflow of purely liberating and soul-stirring visual imagery. During the film’s opening number, in which Usnavi (Anthony Ramos) describes the neighbourhood of Washington Heights, whilst simultaneously introducing the main “players” of our film, the audience has a taste of what’s to come.

Intricately composed songs—strangely reminiscent of MF DOOM’s rhymes and Stephen Sondheim’s grandiose orchestrations—and sweeping camerawork that showcase its wonderful dance choreography, without emphasizing on cutting to produce rhythm. If you’ve seen the dreadful musical The Greatest Showman, you might know what I’m talking about. It’s a musical that had no sense of rhythm in its songs and musical numbers and instead would cut at the most random places to create some sort of aggressive rhythm. In The Heights returns to the vibes of the classic musical that La La Land recreated in 2016, with lush cinematography from Alice Brooks recalling past New York musicals, most notably Robert Wise’s West Side Story in its opening sequence.

Some of the film’s most ambitious set pieces mix classic feeling with a modern twist in its musical rhythm and dance numbers. Think 96,000 which starts out as a purely classical “pool dance” sequence, but its beat quickly changes into something amazingly modern and upbeat, perfectly suited for the music of today. It’s the sounds of the past mixing with the sound of the present and future to create perfect harmony, unmatched by any musical composer working today. That’s the crux of Lin-Manuel’s genius: he’s able to mesh different kinds of sub-genres of music (such as rap, Latin urban, salsa, and classical theatre) in one song perfectly.

Every lyric beat and musical cue flow in flawless synchronization, from one song to the next, that none of it feels jarring. Even when the characters are simply saying “Hello!” or their names (such as the repetitive “Benny!” spoken by Nina Rosario (Leslie Grace) in Benny’s Dispatch), it feels incredibly natural, as if that’s how the residents of Washington Heights live through whimsical song and dance.

“There isn’t a sequence in the film that does not feel creative.”

And this is how the film quickly entrances you, by its vivacious and creative song and dance numbers. After seeing Chu’s G.I. Joe Retaliation, whose best action sequence, set on cold mountaintops, is staged like exuberant dance choreography, it’s clear that the filmmaker had musical sensibilities that were tailor-made for a film like In The Heights. There isn’t a sequence in the film that does not feel creative.

Chu never kowtows to classic song and dance numbers, but always does something new to widen the eyes of its audience members and make sure they’ve never seen anything quite like this before, even if they might be fans of the Broadway musical. Chu asks beyond the typical question of wondering how to transpose a theatre production through film, he demands we make it better than the original production, to make sure as many audiences as possible have the time of their life as they witness the musical on the big screen (or at home).

The centrepiece of that demand is Olga Merediz’s magnificent portrayal of Abuela Claudia, who steals every inch of the screen once she performs Paciencia y Fe—the best sequence of the entire movie. Running at 142 minutes and practically filled with one musical number after another, it’s not hard to be overwhelmed by the onslaught of songs you receive in such a short amount of time; you may even forget some of them.

“That number alone is worth every ounce of accolade she has been getting from critics and her performance very well be in contention for the Supporting Actress Oscar.”

However, once Merediz starts to sing Paciencia y Fe, everything stops, and your eyes quickly start to bubble up. Abuela Claudia isn’t in the film for a substantial amount of time, but she is explicitly described as the heart and soul of the Washington Heights community, which becomes clear once Paciencia y Fe starts. That number alone is worth every ounce of accolade she has been getting from critics and her performance very well be in contention for the Supporting Actress Oscar. It’s the number that perfectly combines the raw emotional power of a song with vibrant colours and its most sophisticated dance number. This is where In The Heights soars more than it initially did, with an emotional crescendo that could’ve only been conceived by one of the greatest musical artists working today.

“Mixing rap with classical theatre is a daunting task, but Miranda does it seamlessly,”

No one can do music quite like Lin-Manuel Miranda. The ones that call him “overrated” or a “hack” underestimate Miranda’s creative genius. Mixing rap with classical theatre is a daunting task, but Miranda does it seamlessly, as if it’s a piece of cake. He’s one of the few, with the late MF DOOM, who understood how powerful rap lyrics can be if paired with the right musical track and/or sample to accompany it, which’ll equate to pure musical magic that can’t be unmatched.

Listen to the different styles Miranda plays with in numbers such as In The Heights, 96,000, Blackout, It Won’t Be Long Now or Carnaval del Barrio and marvel at how seamlessly he can make his performers switch from one style to another, without them ever blinking an eye. The film is filled with indelible talent, in particular Hamilton veteran Anthony Ramos who commands every ounce of the numbers he’s a part of, with Corey Hawkins, Jimmy Smits and Leslie Grace being acting highlights, but there isn’t anything the actors can’t and won’t do. Everyone gives their all to produce the most emotional performances of the year, filled with energy, life, dynamism, but most important of all, heart.

In The Heights succeeds where some musicals fail: it never relies on the heart and soul of its performance to make the entire production work. Without heart, a movie like this could be considered “enjoyable”, without ever being anything more. It’s clear in Chu’s intentions that he not only wants to pay tribute to classic and imaginative musicals that came before, but he’s also able to make an adaptation his own film with intricately designed choreography, stunning and dynamic camerawork and poignant performances from its lead and supporting actors, with Olga Merediz stealing the show.

There is nothing this movie won’t do to remind audiences of the power of a big (big) screen and how it’s able to pull you in its story unlike any other; a privilege that few had access to over the past year. In the Heights is not only the best musical I’ve seen since La La Land, but the best film of the entire year and one to watch for this year’s awards season. Don’t miss it and see it on the biggest screen you can find (if done safely).

In the Heights Reminds Us What the Big Screen Is Made Of, Offering a Visually Vibrant Musical to Be Experienced Collectively on the Biggest Screen Imaginable.

File Under: HBO Max, In the heights, Warner Brothers 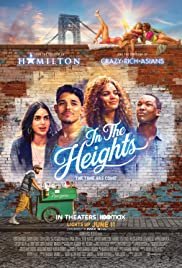