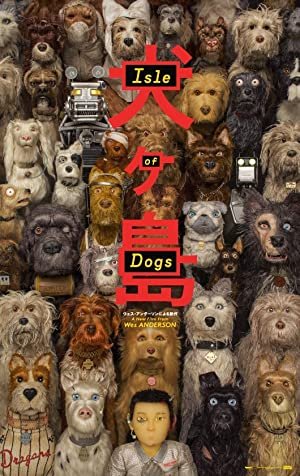 Isle of Dogs is a movie that begins with a notification.

“All dog barks have been translated into English.”

From this simple statement, Wes Anderson dives into his second stop-motion animated film with his trademark aplomb and style. Isle of Dogs is as detailed, stylish and impeccably witty as any of the director’s previous films – perhaps even more than his sole previous animated work, Fantastic Mr. Fox.

The film is set in the fiction Japanese metropolis of Megasaki City twenty minutes into the future, where trouble is brewing for man’s best friend. The canines have come down with such deadly diseases as ‘dog flu’ and ‘snout fever’, and politicians are worried that they could transfer to humans if actions aren’t taken. But instead of caring for them, the citizens of Megasaki City, led by the devious Mayor Kobayashi (Kunichi Nomura), have instead exiled their furry companions to an island made of trash that would be right at home in Wall-E. There, they starve, suffer, and try to make as good of a living as they can, even if most of them know that it’s only a matter of time before their luck and health run out.

One of the imprisoned dogs is Spots (Liev Schrieber), whose master Atari (Koyu Rankin) risks life and limb to fly a plane to the island to find his friend and bring him home. Importantly, Atari is the nephew of the Mayor, and must escape from his human and robotic pursuers with the help of a small pack of dogs led by the gruff Chief (Bryan Cranston), and include Rex (Edward Norton), King (Bob Balaban), Boss (Bill Murray), and Duke (Jeff Goldblum). And over the course of a brisk 101 minutes, the pack and Atari travel across the dystopic and ruined island of trash in order to find Spots, discover the Mayor’s hidden plans, and stage a revolution with the help of a few high school students.

From the get-go, Isle of Dogs is a pleasure to watch. Anderson’s Japanese inspirations for the films look are varied, and range from the woodblock prints of Katsushika Hokusai, to classic manga styles, to the works of filmmakers such as Akira Kurosawa, Yasujirō Ozu and Hayao Miyazaki. Combined with the director’s stylistic choices and love of symmetry, the result is unique for both animation and his previous work. White clouds of cotton signal the hectic fights hiding within, intricately compacted piles of trash look mythic in scope and size, and the dogs themselves may very well be the most adorable and fuzzy versions of man’s favourite companion to ever appear on screen. Scenes that focus on the elaborate creation of a box of sushi and what is likely the first kidney transplant scene in a stop-motion animated film feel unnecessary in the grand scope of the plot, but are eye candy nonetheless.

The voice cast is simply exceptional, with F. Murray Abraham, Scarlett Johansson, Ken Watanabe, Harvey Keitel, Tilda Swinton, and Yoko Ono rounding out much of the other major cast members. The true star of the show is Cranston, however, who gives plenty of heart to Chief as a dog that neither desires a master nor is quite able to understand why he is as vicious as he is. Much like past Anderson protagonists, Chief uses wit and humour to mask the deep-seated brokenness that is at the core of his character. His arc is at the heart of the film, and the scenes where he meditates on the self-destructive nature of his existence are among its best.

The film’s biggest slip lies in the character and storyline of Tracy (Greta Gerwig), the American foreign exchange student who leads the charge against Mayor Kobayashi. There is no real connection established between her and her classmate’s plans to fight back and the journey of Atari and the dogs, resulting in a final act and conclusion that feels as rushed as it is ultimately emotionally satisfying. Combined with a romance angle that develops for seemingly no reason, and you have a character that detracts from the film more often than she contributes.

But it’s not enough to detract away from the spectacle of Isle of Dogs. The soundtrack deftly switches between pounding Taiko drums, soft pop songs and the ever-present whistling that pervades so much of the director’s past work. The script by Anderson, assisted by Roman Coppola, Jason Schwartzman and Japanese writer and actor Kunichi Nomura, particularly shines when the main pack shares whatever rumors they’ve heard from fellow dogs, as outrageous and improbable as they are. It’s easy to become invested in their journey, and it’s hard not to cheer for this band of mangy mutts to pull through and succeed.

Regardless of whether you’re a dog lover or not, Isle of Dogs is a treat.