All a horror movie needs to capture the public’s imagination is a really good hook. It Follows doesn’t have any stars and was made for a tiny budget far from the greedy reaches of Hollywood. Yet, after scaring the pants right off of viewers at a series of film festivals and getting critics to gush like severed limbs in a shitty Saw knock-off, the flick already has cult status despite just hitting most screens this week. That’s all because the movie hinges on a damn good idea that will get audiences’ butts in seats and make em’ squirm. It also doesn’t hurt that David Robert Mitchell’s movie is damn well made in pretty much every conceivable way and has one hell of a soundtrack. But that hook, that’s what’ll get ya.

The Guest’s Maika Monroe stars as a despondent teen living in an indeterminate time in an indeterminate American suburb. She’s started dating a 21-year-old (Jake Weary) and eventually they get up to that late night shimmy n’ shake activity that all horny teens do. Shortly after the deed, Monroe wakes up tied to a wheelchair where Weary explains the concept of the movie to her. Essentially he’s got an STD haunting that he’s passed on to Monroe. From now on, there will be a ghostly figure slowly walking towards her at all times. If it touches her, she dies. She can run because the ghost/demon/specter thingy doesn’t have speed on its side.  But it will always follow her and can appear to be almost anyone. No one else will see it except for the others who have been infected and her only real option for survival is to have sex with someone else and pass it along. The only trouble there is that if the person she infects gets touched by it, that ghostly STD will start following her again and right on down the line. So, Monroe’s in a pickle and now her and her equally lost friends are about to have themselves a spooky old time.

Like all great horror flicks, It Follows is deceptively simple. Director David Robert Mitchell has quite a bit on his mind while staging the spooky shenanigans, but the presentation is pure stripped down simplicity. Clearly Mitchell is a fan of John Carpenter, because the master’s fingerprints are all over this movie without ever teetering past homage and into plagiarism. The writing is terse and direct, the mood overwhelming. A wide cinemascope camera creeps through every scene with Mitchell constantly suggesting to the audience that ‘it’ might pop up in any corner of the frame at every time. The amazing score by Rich Vreeland is 80s synth like John Carpenter and just as omnipresent and atmospheric. Even the performances have the slightly detached underplayed quality of Carpenter. Yet, the movie is clearly Mitchell’s at all times and he’s in complete control. The sense of suspense and dread is palpable from the moment the monster is described and there’s not a second of screen-time when viewers won’t feel uneasy, even though the filmmaker never pummels viewers with spectacle. He knows that the tease in horror movies is always more intense than the payoff.

Where Mitchell departs from Carpenter is in the depth of his writing (Carpenter was a brilliant filmmaker, but, with few exceptions, he wasn’t much of a subtext guy). The filmmaker’s previous movie was The Myth Of The American Sleepover, a deadpan teen dramedy with no genre element but similar themes. Both Mitchell’s debut and It Follows are about listless youths learning the pain of becoming grownups while constantly yearning for it. The difference is that It Follows hits the same themes just as resonantly and personally with a creepy monster at the center. The movie never dwells on message or over states it, but obviously the concept of a first sexual experience introducing the never-ending fear of impending death has plenty of metaphorical potency. The other major achievement in Mitchell’s sophomore effort is his pitch-perfect casting that yielded universally excellent performances. It’s rare to find a horror movie with universally strong acting and God damn it does that ever make a big difference.

So, It Follows is most certainly an excellent little horror movie that deserves all sort of praise and attention for serving up a potent scare factory laced with intelligent food-for-thought. I firmly stand by all the praise that I’ve slathered all over this thing, but also think that it’s important not to big it up too much. Ever since the film’s premiere at Cannes last year, critics have been making wild claims like, “It Follows is the best American horror movie since The Blair Witch Project” and that kind of hype can kill a horror movie. It Follows is a wonderful piece of work, but it’s not a genre-redefining masterpiece nor is it the scariest slice of celluloid that you’ll ever experience. Expecting that will only set yourself up for disappointment and cause you to miss everything that’s done oh-so-well in this damn fine little genre flick. Please go ahead and get excited about It Follows and race to a theater to see it as soon as possible (horror that looks and sounds this good demands a theatrical experience). Just expect a great horror movie, not the greatest horror movie.

Like all great horror flicks, It Follows is deceptively simple. Director David Robert Mitchell has quite a bit on his mind while staging the spooky shenanigans, but the presentation is pure stripped down simplicity. 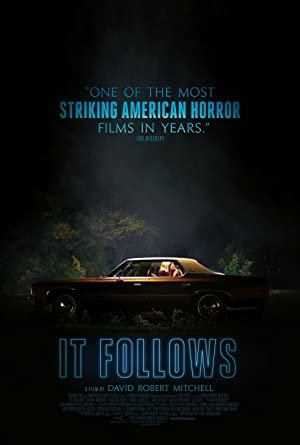