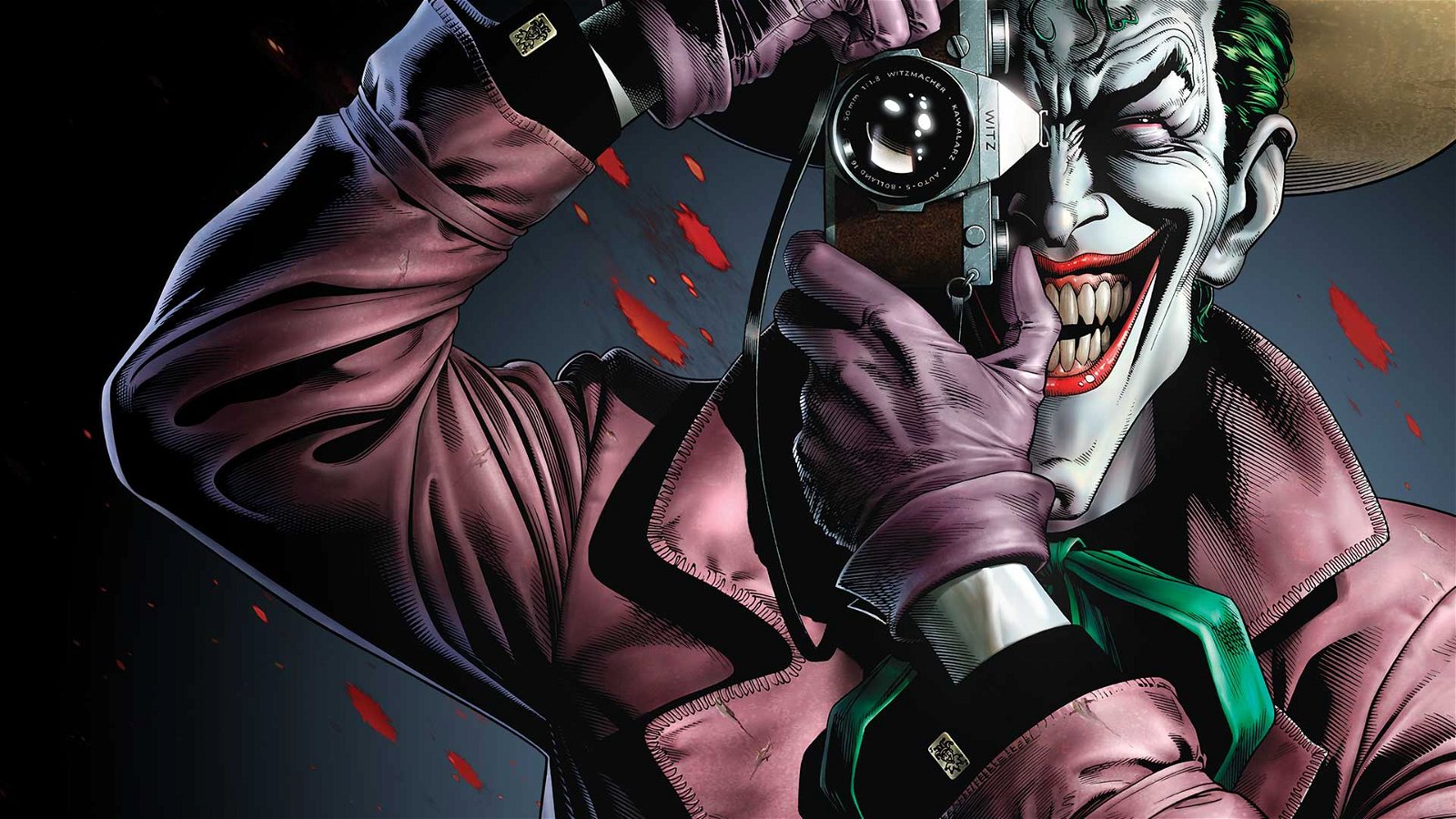 Ever since DC started cranking out animated features based on popular comic book runs, fans have been begging for an adaptation of The Killing Joke. After all, it’s not just the most famous/disturbing Joker tale of all time (from the mind of Alan Moore and the pen of Brian Bolland no less), but it’s the sort of thing that could never be done properly in a live action format. It’s simply too disturbing, perverse, and rooted in DC continuity. The only hope was for an animated feature and after Mark Hamill (aka the best Joker performer, for folks who care about such things) made it clear that he not only wanted to voice an adaptation, but that it would be the only Joker revival that he’d consider, it seemed like it might happen.

Well it did, and the good news is that the actual adaptation of The Killing Joke included on the disc is everything that fans might have hoped for. The bad news is that’s only half the movie and the first half ain’t great.

The thing about The Killing Joke is that as famous as that prestige format book might be, it’s actually rather short. Moore penned it to be an Annual, but it was bumped up to something bigger when his name grew in stature. The 48-page story only hits about 40 minutes of screen time and that’s just not enough for an animated feature. In an ideal world, the disc would contain two separate Joker tales (perhaps Ed Brubaker’s brilliant but similarly brief The Man Who Laughs) to make up for the briefness of the main event. However, that’s not what happened. Bruce Timm and co. instead decided to expand the tale to feature length, which was a real mistake. The opening half hour in particular is essentially a disconnected narrative that doesn’t remotely live up to what follows. In fact, it’s kind of brutal.

The opening section of the movie focuses on Batgirl (Tara Strong) and, admittedly, the motivation behind that decision was noble. In recent years there has been criticism flung at The Killing Joke because the brutal attack on Barbara Gordon is considered misogynistic for how it dismissively destroys an iconic female hero in a sudden aside. For me, that doesn’t feel quite right. It was designed to be a shocking, disturbing, unexpected and evil act that comes out of nowhere. Moore didn’t limit Barbara’s role out of dismissive sexism, but for maximum visceral impact that would deeply upset readers because of the years of devotion to that particular character. However, that’s not how many fans feel and the folks behind this animated feature decided to overcompensate.

The movie opens with a Batgirl plot, and not a particularly good one. We see her fight a generic gangster character while crushing hard on Batman and cattily discussing it with her stereotypically gay friend in the library. At a certain point Batman and Batgirl have sex. Why? Purely to be shocking according to writer Brian Azzarello (who to be fair, has written some great comics). By defining Batgirl almost entirely by her sexuality and cornball romantic/jealous girlishness in the opening half hour, the movie actually comes off as more sexist and dismissive towards Batgirl than the original comic. The damage control went the wrong way and feels completely out of place given that the rest of the story is almost exclusively focused on The Joker and Batman—even though they are after thoughts in the first half. It unbalances the movie and feels tonally awkward. Quite frankly, that 30-minutes represents some of the worst work that the DC animation team has done in their direct-to-Blu features.

Thankfully, the flick was also deliberately constructed so that once that unnecessary business is over, it’s a pure and straight forward adaptation of The Killing Joke that represents some of the best work that the DC animation team has ever done. Dialogue is lifted almost entirely from Moore’s original comic script and sounds wonderful brought to life. Director Sam Liu (All-Star Superman) lifts as many frames and transitions from the book as possible and the look finds a nice balance between the angular house art style of Bruce Timm and Brian Bolland’s more expressive touch. None of the harshest beats from the grisly tale are ignored. It’s a nasty Joker story; one that’s rarely been topped and has the feel of a horror film when it reaches the Joker’s mind shattering funhouse. The dependent dichotomy between Batman and The Joker remains and wraps up with an ambiguous ending that should please those who have theorized endlessly about what it means (especially Grant Morrison’s murderous interpretation).

The voice work is also spectacular. Kevin Conroy’s base tones remain the definitive Batman and he handles the mixture of calm negotiation and pushed-to-the edge rage required perfectly. Even better is Mark Hamill’s Joker, who was clearly having a ball spitting out Alan Moore’s words. It allows him to push the playful version of the character that he developed on The Batman Animated Series to the horrifying psychotic limit that Moore created long ago (plus the origin flashbacks let him drop the theatrics for more heartbreakingly human work). Hearing him sing his climatic song in the middle of a fairground nightmare is the highlight of the piece and a brilliant bit of Joker horror. Ray Wise steps into Jim Gordon’s role for the first time and handles it well, especially considering the desperate places he must take the character. Tara Strong is a strong Batgirl, as always. She’s likely the best part of the forgettable first half and handles the horrors of the second have quite well.

The best approach to watching this adaptation of The Killing Joke is to start at 31:04 where Alan Moore’s story begins. After that, you’ll get a brilliantly performed, beautifully animated, and impressively faithful adaptation of The Killing Joke that is everything fans could have hoped for (despite the fact the slightly expanded script needlessly implies rape a little more than even the original tale suggested). Even though it’s ultimately a simple tale about the never ending Batman/Joker game pushed to intelligent and terrifying extremes—by Alan Moore at his most playfully vicious—with an added tragic Joker origin for good measure, this is a great ripping Gotham City yarn that is impossible to forget given the twisted places it goes. It’s a shame that the folks behind the feature felt the need to tack on such an unfortunate opening extension that adds nothing but disappointment to the proceedings. Thankfully fast-forward buttons, scroll bars, and chapter select technology all exist. So you can make your own version of The Killing Joke and only watch the good stuff. If you do that, this release rivals the brilliance of this team’s The Dark Knight Returns adaptation. If you don’t…yeesh…you know what just skip the rest. It’s not worth it.

Now, onto the Blu-ray itself. The HD transfer is gorgeous, with colours that leap off the screen and a beautifully evocative score that fills out sound systems with atmosphere. Bruce Tjmm’s team might have added a few extra fight scenes to the tale, but for the most part it plays as written: a character and dialogue driven psychological horror. As a result, the moody score and carefully coloured visuals add a great deal to the tale’s nightmarish tone.

Sadly the special features aren’t as abundant as in previous releases. There’s a 17-minute documentary on the legacy of The Killing Joke that is an interesting piece filled with appearances from DC comics veterans and a few members of the film’s production team, but sadly there’s no input from Moore, Bolland, Conroy, or Hamill, which is a real shame since that essentially just makes it a fan appreciation doc. They cover the book’s impact in depth and attempt to explain the opening half hour of the feature, but it feels a little light compared to other docs that have appeared on these releases that really let viewers into the filmmaking process as well as the origins of the book. There’s a nice 10-minute documentary on the score as well and oddly enough that’s where Mark Hamill shows up. As always, it’s great to see him recording the voice, but sadly he doesn’t get into much detail about his approach to the Joker or his love of this material (which is a real shame since this will likely be the last time he voices the character). Oh well.

After that there are extended adds for a variety of DC Animated features, including the upcoming Justice League Dark that looks like it will be a damn fun anti-hero team up (plus it’ll have a proper Swamp Thing, which is a dream come true for this particular dork). There is also a pair of appropriate old Batman Animated Series episodes. The first ever Joker episode “Christmas With The Joker” is there, which isn’t the best but it’s nice to have Hamill’s first Joker performance included with his final one as bookends. Then there’s “Old Wounds,” a tale of why Dick Grayson left Batman to become Nightwing that explores the Batman/Joker/Batgirl dynamic in a more playful way than the main feature.

Sadly that’s it. This isn’t an overstuffed release like The Dark Knight Returns, which is likely the result of Moore’s disinterest in discussing this book, Hamill’s Star Wars schedule, and the fact that Blu-rays just don’t sell like they used to. Unfortunately this isn’t likely the dream release that fans may have hoped for, but at least there is finally an animated version of The Killing Joke. It’s a bit of a miracle that even happened, so suck it up.

The good news is that the actual Killing Joke adaptation is excellent. The bad news is that’s only half the movie. 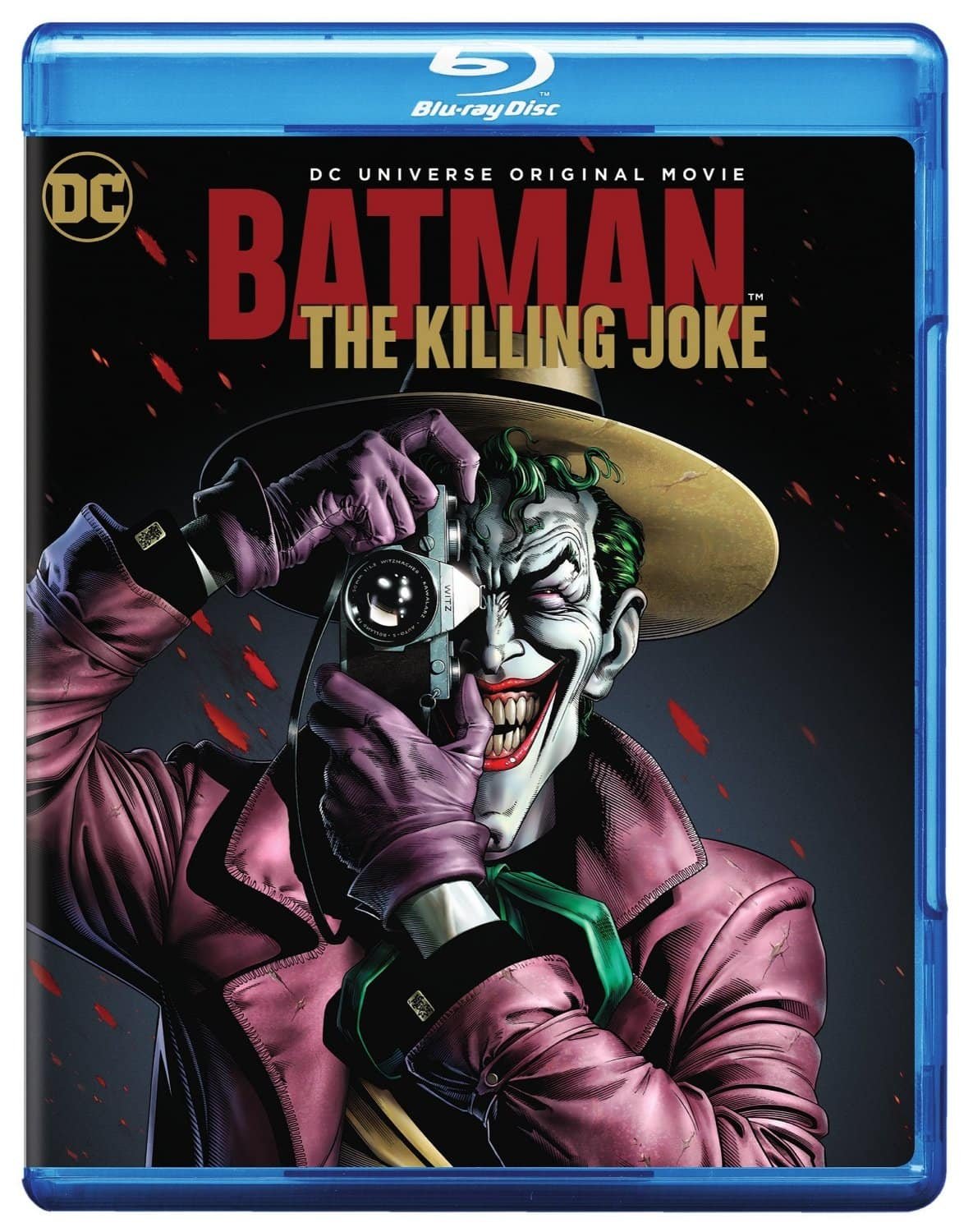