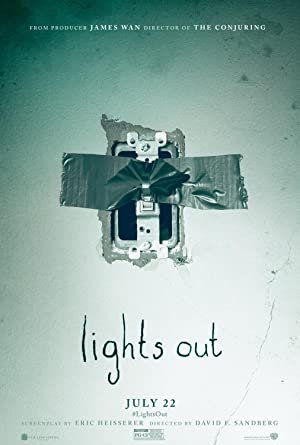 So here’s a nice story you don’t hear every day: A few years ago an enterprising young chap named David F. Sandberg came up with a brilliantly simple horror movie concept that he turned into a creepy little YouTube short that caught on like wildfire. Saw, Insidious, and The Conjuring director James Wan found the clip, got the heebie-jeebies, and signed on as a producer to help Sandberg turn his lil’ Internet clip into a feature length Hollywood scare factory. It’s a nice story; an inspiring one even. The type of thing that every aspiring filmmaker dreams of when they post their home made horror shorts online with dreams of grandeur. The actual movie itself? Almost an anti-climax. It’s good, and proves that Sandberg indeed has some horror directing chops. The trouble is that the Lights Out very much feels like a short stretched out to feature length and that’s not necessarily a good thing.

Things kick off with what is essentially the Lights Out short film with a budget: a creepy prologue in which a few late night factory workers encounter a ghostly spectre that is only visible in the dark and disappears in the light. From there, we meet Teresa Palmer playing a strong n’ tough young lady who likes metal, horror, and giving her tattooed dreamboat BF (Alexander DiPersia) a hard time. She’s tough because she came from a dysfunctional home. Specifically, her father disappeared at an early age, leaving her trapped with a single mama (Maria Bello) afflicted with some pretty severe mental illness issues involving a creepy imaginary friend named Diana. Palmer also has a little half-brother (Gabriel Bateman) currently living with that same troubled mother. Even worse, his father was one of the folks bumped off in the opening scene. Bello is off her meds and Diana has returned as that light phobic ghost everyone is screaming about.

Lights Out is the latest chapter in Hollywood’s current obsession with jump scare horror and another in a line of movies that live and die on shadows, suspense, and loud bumps in the night. It’s simple stuff, but when executed with the proper craft it can turn a packed movie theatre into a squealing gaggle of kids scared of the dark. Obviously this premise suits that style perfectly and the good news is that first time filmmaker David F. Sandberg has a knack for using atmosphere and jolts to make audiences whimper. While James Wan provided resources and a marketable name to put on the poster, his machine gun editing and blunt-force trauma approach to jump scares thankfully don’t define the movie. Sandberg is a more relaxed and classical stylist who uses stillness and silence to his advantage. He comes offers up plenty of twists and light sources to extend out his gimmick and somehow the same tricks keep working over the flick’s taut 81 minute running time (including credits).

The performances are also surprisingly solid across the board, particularly from the strong Palmer and jittery Bello. It helps that for a little while, the movie cleverly presents the hauntings as a manifestation of Bello’s mental illness, with her children playing their roles like the concerned children of a lost parent. It’s fairly well handled as metaphoric horror, even sensitively so. Alas, this is a Hollywood horror tale. Eventually that mysterious subtext translates into cartoonish text as the screenplay wallows in psychobabble and settles into a pretty absurd supervillain backstory. It’s sad to see the potential of the story slip away into more obvious genre tropes, especially since the one-note nature of the central apparition ensures that there aren’t too many surprises hidden for the finale. The style of scares never changes; the context just gets more elaborate.

As a result, Lights Out can feel pretty repetitive. While there was an attempt to add mythology and backstory to justify the feature length running time, the flick never feels like much more than a great idea for a short repeated until the movie is long enough to qualify for feature-length release. Some horror fans will grow irritated and feel cheated, especially if they consume genre flicks as fast as they are released. However, there’s no denying that Sanderberg and co. made their film with passion, talent, and intelligence. This is probably about as good a movie as could possibly be made from the concept, for better or worse. It works and should go over like gangbusters in a theatre full of willing participants during a shrieking jump scare festival. There’s nothing wrong with that. In fact, it’s not easy to even pull off something this simple, this well. However, let’s all hope that David F. Sandberg is allowed to get a little more ambitious with his next horror outing. The guy clearly has chops and ideas. He just needs more freedom to get ambitious.