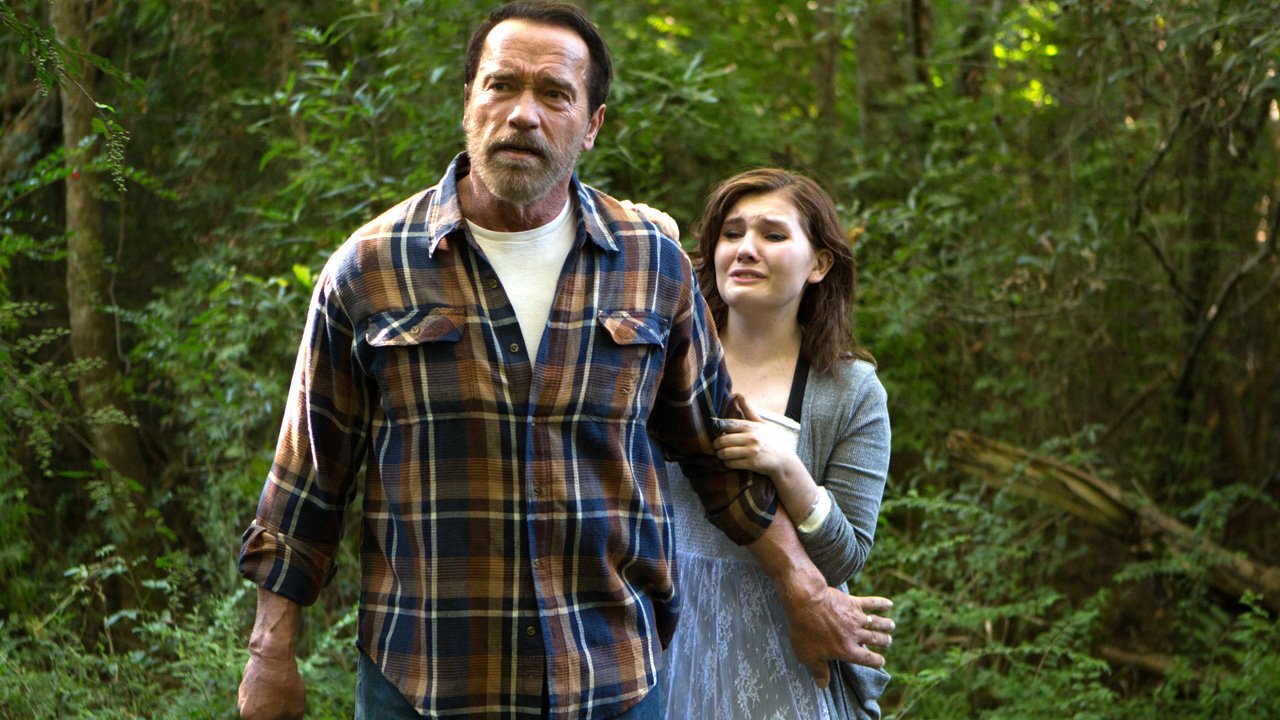 What’s that? There’s a zombie movie starring Arnold Schwarzenegger? Are you kidding me? That sounds like something I’ve been dreaming about my entire life! Can I assume that Arnie is going to be marching around cracking open zombie skulls with the flick of his finger, stubbing his cigars out in they’re eye sockets, and spitting out one-liners like, “I’ll zom-BE back?” This sounds incredible! I can’t wait to see all of the ridiculous actions scenes and slapstick comedy and….huh? What did you say? The Arnold Schwarzenegger zombie movie is actually an intimate drama that’s more about a father and daughter’s fragile relationship than non-stop carnage? Wow…um….I guess I’ll still see it. What else am I going to do with my time? Something productive?
Yep, that’s right. We finally have a movie that combines the Austrian mountain of destruction and the most easily explode-able monsters and it’s pretty much the exact opposite of what you’d expect. Arnie plays a sad and crumbling shell of a man. He lives in the midst of a zombie outbreak, but it’s actually fairly well contained. In this world, anyone bitten by one of those undead buggers has weeks of life left before the infection spreads, so there’s plenty of time for them to be quarantined and controlled. The biggest problems that arise are personal, like when your family members are on the countdown to zombie town. Abigail Breslin plays Schwarzenegger’s daughter who has recently been infected. So Arnie’s got to take her home and get super sad while watching her trudge through her last few weeks of existence. Aside from a couple of zombie-killing scenes and a last night out with friends for Breslin, that’s pretty much all the movie offers: just a father and daughter getting sad on a farm while waiting for girl to go zombie.
It’s not the worst idea for a movie in the history of the world, just one that might be a little past it’s prime. Let’s face it, these days zombies are as ubiquitous in pulp culture as Mickey Mouse. You can’t turn on a television without at least seeing an ad featuring a zombie. It’s starting to get old. First time writer John Scott 3 and director Henry Hobson clearly thought they’d try to twist the popular trend by sucking all of the sensationalism out of the genre and focusing entirely on the human tragedy. The movie leans heavily on that old “zombie-ism as metaphor for terminal illness” chestnut and it’s not that the metaphor isn’t potent, just that we’ve all seen it before. In fact, there’s very little in Maggie that wasn’t covered in the parental horrors subplot of the original Night Of The Living Dead. The major changes that Scott 3 and Hobson offer are removing big final scare from that George Romero classic and stretching everything else out to feature length through lots of shots of brooding and looking off into the distance somberly.
It has to be said that the filmmakers did at least cast their central roles damn well. Abigail Breslin continues her quest to be remembered as more than the cute kid from Little Miss Sunshine and she’s succeeding admirably. There’s no perkiness or humor to this performance whatsoever. She’s in deep pain and existential angst from scene one and plays it all subtly and powerfully. The girl’s got talent and takes what could have easily been a whiney irritating role and makes it relatable. Remarkably, Schwarzenegger gives a surprisingly strong dramatic performance as well, even squeezing out the first tear that must have ever trickled down his stony face. For once Arnie actually comes across as a wounded human on screen and that’s a pleasant surprise. Granted, Schwarzenegger achieves his goals by underplaying everything as a silent tough guy who never lets out his feelings. Arnie’s posture and weathered face do the bulk of the work in this performance, but it works and he’s good.
So, I suppose if what you desperately want to see at the movies this weekend are a pair of subtle and mature performances by Abigail Breslin and Arnold Schwarzenegger, then by all means rush out to see Maggie. Sadly, the flick doesn’t offer much else. As a po-faced drama about a father watching his daughter die, it’s a decent bit of work. Unfortunately, the fact that the daughter dies of zombie-ism pretty much guarantees that any audience who would enjoy that type of drama will never show up. Meanwhile, the folks who would buy a ticket to an ‘Arnold Schwarzenegger Vs. Zombie’ movie will be disappointed by the complete lack of action and scares. So, it’s hard to say who Maggie is for. It’s a decent little movie for the extremely small selection of viewers who have decided that they don’t want many zombies in their zombie movies anymore and would prefer if Arnold Schwarzenegger spent more screen time brooding that killing. I hope the strange folks that feel that way are able to find Maggie because everyone else will react to this thing with a resounding, “meh.”

In fact, there’s very little in Maggie that wasn’t covered in the parental horrors subplot of the original Night Of The Living Dead. 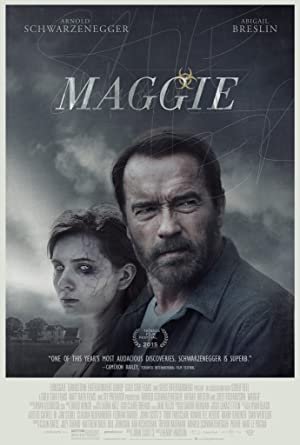