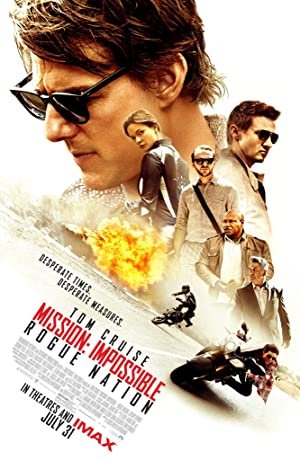 I can’t imagine even Tom Cruise imagined he’d still be cranking out Mission: Impossible movies 19 years after he created the franchise for himself back in 1996. Yet here we are, and it now seems the go-to means for Cruise to attempt to bounce back whenever his profile dips a bit at the box office. Following the genuinely horrible Jack Reacher and Oblivion, as well as the sadly underwatched Edge Of Tomorrow, Cruise has stepped back into his spy shades for yet another round of impossible missions. This one was a bit rushed compared to past instalments, with production apparently starting before anyone had even decided on an ending. Sadly, that’s all too obvious in the final film, which is admittedly fun at times for stale retread of past hits.

The movie kicks off with that big “Tom Cruise dangling off of a plane” stunt that you’ve seen in internet docs, posters, and trailers about a bazillion times already. There’s no denying that it’s a striking stunt for the 50something actor to deliver, but the sequence also comes completely out of nowhere with little set-up and no connection to anything that follows. It’s clearly a sequence that everyone involved in the production agreed was cool and had to be shot, without any real concern for how it would fit into the movie as a whole. Sadly, that’s pretty much the approach that the filmmakers took to every aspect of the generically titled Rogue Nation. The big set pieces are always great, but the connective tissue between them is a real drag.

The plot is a bunch of nonsense about a secret organization that Cruise must flee from the IMF in order to hunt down. There’s an evil arms dealer type at the centre of it all (Sean Harris), which is essentially the plot of all of the Mission: Impossible movies thus far. Only this one is even less interesting than usual. Eventually Cruise meets sexy ex-MI6 officer Rebecca Ferguson, who is working as a double agent within the evil organization. The actress is fantastically charming in her performance, and spectacular in her ass-kickery. She’s fantastic, just don’t expect there to be any chemistry between her and Cruise beyond a friendly hug. This is—inexplicably—a sex-free spy movie.

But, whatever. Cruise also rounds up his buddies from previous outings, which means that Simon Pegg gets to unleash his comically befuddled nerdy charms, Jeremy Renner does whatever the hell it is that made him a star (I’m not sure how that happened, but he seems like a nice enough guy so I’ll let it go), and Ving Rhames sits behind a series of laptops with a tilted hat, because why not? Alec Baldwin also pops up as an angry head of the CIA, but don’t expect anything beyond whispered exposition from him. Baldwin never gets to unleash any of his deadpan comedy, which is a shame because a) this overly sombre movie could have used some laughs and b) he has to deliver one of the most ludicrous lines of dialogue in blockbuster history, which really could have benefited from some irony.

It doesn’t really matter what any of the supporting players do; like all Mission: Impossible movies, this is the Tom Cruise show, and that movie star is always front and centre. Ethan Hunt just might be the franchise hero with the least discernible personality in movie history. Despite five movies existing, all we really know about Hunt is that he looks and acts like Tom Cruise, which I suppose is enough. Cruise definitely dives into the action set pieces fearlessly, following up that plane dangling with a delightfully Hitchcock influenced assassination sequence at an opera, a wild motorcycle mountain chase, and an underwater heist that are all—admittedly—pretty damn exciting. Cruise visibly performs most of his own stunts, which is a nice change of pace in the CGI blockbuster era, but between those big set pieces, all the actor really does is furrow his brow either comedically or dramatically. There’s not much else in the way of acting going on from Cruise. He’s pretty much there as the world’s most expensive action figure prop, though I suppose the franchise has always been as such.

Although Mission: Impossible – Rogue Nation serves up some popcorn fun, there’s no denying that this is one of the lesser entries in the series. A big reason for that was Cruise’s choice of director. In the past, Tom always plucked out big-name directors with distinct personalities to lend their voice to the series—and it worked. Brian DePalma kicked things off with a delightful suspense melodrama, John Woo turned it into a ludicrous guns n’ doves festival, JJ Abrams tossed in lens flares and backstories, and Brad Bird turned it all into a big glorious cartoon. This time, Cruise brought in his buddy Christopher McQuarrie, and while that guy is a wonderful writer (he won an Oscar for The Usual Suspects and helped whip Edge of Tomorrow into shape), he’s not much of a director. He’s perfectly adequate at the job, but has no distinct voice to add. Instead, he just piles plot twists on top of plot twists in the script and apes the greatest hits of previous M: I directors in the action scenes. The result is a perfectly watchable bit of popcorn fluff, yet also quite possibly the least memorable entry in the Mission: Impossible franchise. The fact that everyone pulled off a M: I fivequel this enjoyable at all is impressive, but hopefully if Cruise cranks out another one of these, he’ll find another eccentric director to make it sing. Without a fresh voice to jumpstart the series again, Cruise’s spy games are starting to feel a bit weary and repetitive. It could be enough to kill the franchise if he’s not careful

Although Mission: Impossible – Rogue Nation serves up some popcorn fun, there’s no denying that this is one of the lesser entries in the series.
REVIEW SCORE
6.5
File Under: Jeremy Renner, Tom Cruise