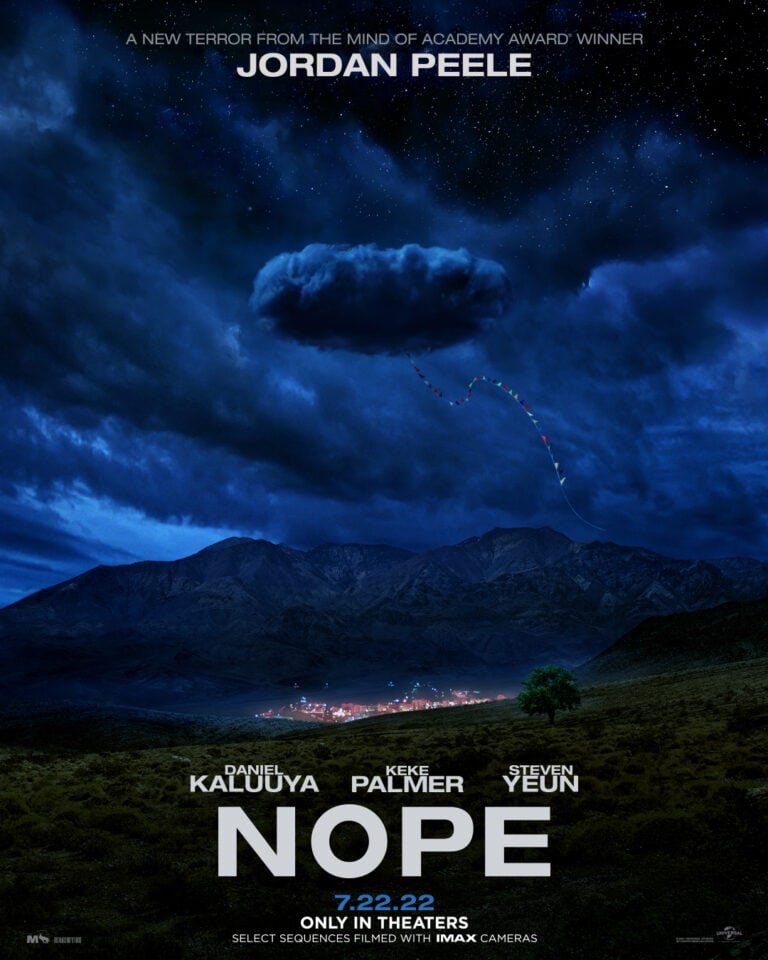 In just three movies, comedian-turned-horror director Jordan Peele has already become a name that audiences will flock to see just off that alone. Rolling out the gate with the instant (Oscar-winning) classic Get Out, he expanded his scope with the messy yet still effectively creepy Us, Peele has decided to go on an even bigger scale with his alien invasion flick Nope.

Nope centres on the horse-training Haywood siblings, Otis Jr. (Daniel Kaluuya) and Emerald (Keke Palmer). OJ and Em are struggling to keep the family ranch afloat following the sudden and mysterious death of their father Otis Sr. (Keith David), losing out on Hollywood gigs and being forced to sell some of their horses to the nearby carnival led by former child star-turned- barker Ricky “Jupe” Park (Steven Yeun). However, one night, OJ sees “something big” in the sky above their house.

Something that might not be of this world. The siblings, alongside the help of tech-support employee Angel Torres (Brandon Perea) and documentarian Antlers Holst (Michael Winwood) try to get what they call “the Oprah shot” – unimpeachable proof of alien life and a ticket to fame and fortune.

It’s important to note off the bat that anyone who is expecting a straight-up horror movie like Get Out or Us should check those expectations at the door immediately. Nope is first and foremost a sci-fi flick. It’s Jordan Peele’s homage to westerns and early-era Spielberg, Jaws and Close Encounters of the Third Kind in particular being the most overt references. That being said, the horror elements that are there are just as unnerving as Peele’s ever done. While not explicitly gory, thanks to some incredible sound design, there are many incredibly disturbing moments of off-screen violence that will be sure to stay in peoples’ memories for a very long time.

“Like Peele’s other films, Nope is rife with social commentary.”

The character work between OJ and Em is a major highlight in Nope. Both Daniel Kaluuya and Keke Palmer do a great job playing up the little nuances between siblings: the bitter arguments, the eventual in-jokes, and everything in between. The duality of their personalities are very distinct and works to their strengths: OJ is quiet and reserved, Em is lively and energetic.

However, their bond through this shared trauma (both the loss of their father and this new ominous threat) feels very natural. There’s also quite a few laughs throughout the film, especially from the supporting cast. The conspiracy-theory minded Angel would be an easy character to make grating, but Brandon Perea injects the right amount of charm to be genuinely invested in. As for Antlers, he may feel sadly underused, but veteran character actor Michael Wincott’s commanding voice and screen presence makes every moment he’s on screen matter.

Like Peele’s other films, Nope is rife with social commentary. It carries on themes of growing from trauma and the major costs of following the American Dream. Unfortunately, it feels like it drops off of the thematic heft it built up in the first half for the name of pure spectacle. For example, A plotline involving Jupe’s backstory (himself a survivor of a horrific on-set incident) gets abandoned fairly quickly.

At first glance it was disappointing to not see this have any sort of immediate play in the final act, however, this is something that could change with repeat viewings. Also, the aforementioned spectacle is absolutely stunning to watch. The way cinematographer Hoyt van Hoytema (Dunkirk, Interstellar) captures the screen just gives Nope this massive sense of scale, which is even more impressive considering the movie only has very few locations. It gives the feeling that the characters are in way over their heads. That goes doubly so seeing it on an IMAX screen.

Overall, is Nope worth watching? Yup. Jordan Peele crafted an impressively well-crafted sci-fi flick that while it displays clear homage to classics, feels unlike anything we’ve seen before it. It is a bit messy thematically, and it’s certain to divide audiences who are expecting a much different movie, but Nope is an action-packed, frequently scary and funny thrill ride that will be worth going back to again and again.

Nope is Jordan Peele at his most ambitious to date. While not as thematically overt as his last films, Nope packs enough thrills, chills and laughs to be one of the most entertaining blockbusters of the summer.
REVIEW SCORE
9
File Under: Horror, Jordan Peele