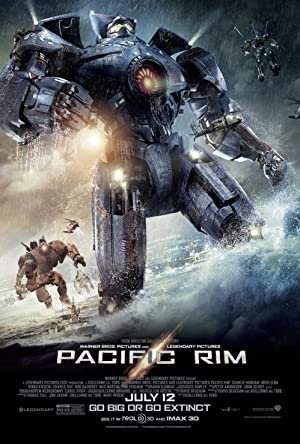 For those who complain about the overabundance of “crash, boom, bang” filmmaking in the summer blockbuster season, Pacific Rim should serve as a textbook on how to serve up that brand of entertainment. It’s big, loud, explosive, and ultimately about little more than the joyous sight of robots and monsters smashing into each other.

However, in the hands of a visionary fantasy filmmaker like Guillermo Del Toro, the flick proves that watching someone with talent indulge in the world’s most expensive game of action figure warfare can still bring a smile to the face of even the most cynical audience. This movie is why we all go to the theater in the summer with massive tubs of popcorn. Expensive escapism can still be immensely fun and shame on the Michael Bays of the world for giving the genre a bad name. Del Toro tapped into his inner 10 year old and found a way of bringing that little guy out in all of us. Now let’s just hope that the movie will be the hit it deserves to be, one that will encourage studios to let more eccentric filmmakers play with the type of resources normally only allotted to the company men.

After a sneak peek at the giant destruction to follow, the movie opens with a delightfully tongue-in-cheek mock documentary prologue that shoves the audience head first into the gloriously goofy mythology. For some reason, a portal to an alien planet opens up in the ocean, unleashing giant monsters known as Kaiju (a term Del Toro borrows lovingly from the Godzilla inspired Japanese monster movies of his youth). The Kaiju quickly start leveling cities and getting humanity all in a tizzy. Fortunately, humans find a way to fight back with equally giant robots known as Jaegers so huge that they must be controlled by two humans at once, using a neural bridge. Quickly, the balance starts to shift. The humans and their Jaegers start kicking all sorts of Kaiju behind and the Kaiju respond by returning in stronger, more evolved forms. At the same time, humans start falling in love with the Kaiju, merchandising their images and creating a black market for giant monster meat. After that blitzkrieg of comedy and exposition passes, the actual story begins.

The person providing voiceover for the opening catch-em-up is Charlie Hunnam, a former Jaeger pilot who saw his brother die mid-fight monster/robot, and since they were neurologically linked at the time, it left a scar so big that he gave up his Jaeger piloting past. However, he was one of the best in the biz, so an appropriately grizzled Jaeger general played by Idris Elba shows up to bring him back for humanity’s final fight. Hunnam is partnered up with young-pilot-in-training Rinko Kikuchi who suffered childhood trauma at the hands of the Kaiju and has a desire for revenge as personal as Hunnam’s. They form the type of unlikely, yet perfect pair that it takes to be heroes in a proper summer blockbuster and prepare for the big fight. At the same time, Guillermo peppers in some welcome comic relief in the form of two hilariously eccentric Kaiju scientists (Burn Gorman and It’s Always Sunny In Philadephia’s Charlie Day) who prepare the pilots for the final fight in hilariously eccentric ways and enlist the help of Ron Perlman’s sleazy underground Kaiju profiteer. And with that, all the pieces are in place for summer popcorn bliss.

Pacific Rim falls firmly into the populist half of Guillermo Del Toro’s career that previously gave us flicks like Blade II and the Hellboy movies. While it’s safe to say his more personal work like The Devil’s Backbone and Pan’s Labyrinth is far more complex and interesting, Del Toro needs hits to get the box office clout to finance those sorts of movies and thankfully, he’s one hell of an entertainer when he gives himself over entirely to those instincts. Pacific Rim is an absolutely gorgeous piece of work to behold, filled with exquisitely designed monsters made for collector toy tie-ins and anime-inspired giant robot designs created with just enough internal logic to stand up to critical viewers. When the beasts and bots clash, the director crafts the type of grandstanding spectacle that will make audiences applaud. The battle sequences (one of which lasts a show-stopping 25 minutes) are eye-tingling light shows of bright colors and explosions, yet shot in a way that you can actually see. There’s no distracting shaky-cam here, just carefully designed and controlled visual sequences that wring the most audience enjoyment out of watching things smash and go boom. That’s what you get when you hire an artist to make commerce and even the studio mandated post-conversion 3D is executed with such skill and attention to detail that it’s the finest work in the eye-poking format in months if not years despite the fact that Del Toro never had a 3D camera on set.

Coming in at a welcome n’ trim two hours minus credits, Pacific Rim never falls into traps of excessive indulgence that plagued most other blockbusters this summer (particularly The Lone Ranger, which will undeservingly end up being the biggest flop of the year). The filmmaker knows how to pace the story, rocketing through plot points while providing just enough beats of character and emotion to make viewers care. With a cast populated exclusively with talented TV actors untapped by blockbuster filmmaking, the performances are all strong and sound, providing enough moments of meaningful and/or moving human interaction between the carnage to give the story a soul and thankfully without ever lapsing into manipulative sentimentality (there is not a frame of unnecessary love story or tragedy here). Balancing all those elements while still keeping the action and spectacle the star is not an easy task and Del Toro deserves heaps of praise and barrels full of cash for his efforts.

While it might be his least artistically ambitious project in many ways, Pacific Rim is still a massive achievement for the filmmaker, proving that if Del Toro puts his personal obsession on hold for a little giddy entertainment, he can make audiences hoot n’ holler with the best of them. It’s still a shame that Del Toro has yet to be given a chance to mount a passion project since the Oscar-winning triumphs of Pan’s Labyrinth way back in 2006 (well, unless you count the wacko charms of Hellboy 2, but you shouldn’t), but at least he was finally given the chance to spend over $150 million the way it should be spent. This is the type of rousing entertainment that should hit screens every week in the summer months yet rarely does and should earn the director the right to crank out something smaller and weirder as a reward. It’s also a movie that offered some welcome relief for me on a personal level. After three rounds of disappointing Transformers movies, I’d become concerned that I’d outgrown the simple joys of watching giant robots smashing into each other. Thankfully, Pacific Rim proves that Transformers series were just garbage movies and those primal destructive joys remain universal when done just right.