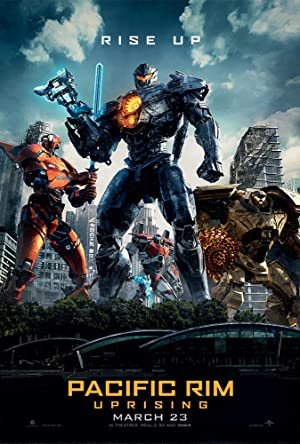 The first Pacific Rim had the collective benefit of the doubt. It was a passion project, produced and directed by Guillermo del Toro, in an era sorely lacking robot versus kaiju beat ’em up flicks. For all its faults—and cheese—it had a soul, and will go down in history as a cult classic for mecha fans everywhere.

I can’t say the same for Pacific Rim Uprising when it comes to nearly every facet of its foundation.

We’re immediately drawn into an “explainer” of sorts, just in case you didn’t get the gist that this movie was about giant robots fighting gargantuan monsters. The overview reminds us of the Precursors, an alien menace that sent Kaiju, organic weapons of destruction, to Earth. We’re also given a refresher on humanity’s efforts to battle them with Jaegers, specialized mechs that for the most part require multiple pilots by way of a neural link. Ten years have passed since the events of the first film and things aren’t quite the same. It’s at this very moment that I started to sniff out its squandered potential.

At first, I was into this new cheeky dystopian landscape. The world is in a state of martial law and coastal zones are still in ruins, but people somehow find the time to party. The atmosphere is both easy-going and uneasy, and its people trade in coveted goods like Sriracha sauce. I dig this small slice of life we’re given in the opening moments. We’re given a brief window into what could have been intriguing new ground for the franchise, but very quickly we’re reeled back into predictability.

We’re introduced to John Boyega‘s Jake Pentecost, a morally questionable scavenger who is just trying to get by, an anti-hero archetype to which Pacific Rim Uprising contributes nothing new. Before long, after a shaky cam chase foot chase that could have been copied directly from a smuggler betrayal scene in any sci-fi film, we’re introduced to the young Amara Namani, a hopeful Jaeger pilot. One slow-mo comedic scene later and we find them in trouble with the law and thrust into military service—you can probably see where this is going.

Just as I was getting into the world building efforts from Pacific Rim Uprising the rug was pulled out from under me. I’m not fundamentally against the idea of a father-daughter narrative device (a recent mutant-focused project mostly pulled this off), but it simply sets a new tone throughout the film that’s at odds with its scenes of peril and loss. Pacific Rim Uprising can’t really decide what kind of movie it wants to be, and is in constant flux between trying to make us laugh or cry. In spreading itself so thin it accomplishes none of its goals outside of giving us a handful of fun robot scenes and flashes of chemistry.

The main culprit is Pacific Rim Uprising‘s rendition of the Scooby Doo gang that work with the main duo to save the day. Cadet with a chip on her shoulder? Check. Nice guy who tells the newbie not to worry about said cadet? Check. Guy who is a little unsure of himself? Oh you better believe that’s a check. There’s even a “zoinks” worthy investigation scene that only serves to highlight that the entire gang is merely a MacGuffin, and a brief, almost studio-mandated romance subplot that doesn’t provide the levity it seeks.

A lot of the film’s identity is lost when the script attempts to re-create the “big picture” military struggle of the first. What started off as a light-hearted romp through the ashes of Earth becomes a retread with so many moving parts that it buckles underneath its weight. Because of this concession, the exposition frequently goes overboard. I get that some people will perhaps be coming in without knowledge of the previous film, but after the first few, “Remember when we did this…” sentiments I started to check out.

Its fight scenes, which many would consider the main event, do mostly deliver when it comes to tension and aptly acrobatic CG choreography. Director Steven S. DeKnight and company do a fine job of constantly highlighting the collateral damage of each city battle, and there are a few superb tracking shots throughout that give us a good look at the action but still keep the principal set pieces in focus. Yet what the viewer is mostly getting is a string of skirmishes and one giant battle at the end, with very little in the way of actual Kaiju. In fact, only one fight in an arctic tundra passes the, “Yeah, I’d watch this again in the future” action movie test. If only there were more scenes for the Jaeger to shine—these static but strangely emotive machines are something I can’t quite take my eye off of.

At one point Jake tells someone not to “mess with his damn toppings” while assembling a late-night snack, which serves as a perfect metaphor for where the film went wrong. It already had a rich universe that millions of dedicated fans wanted to see more of, but instead of tapping into that, Pacific Rim Uprising tries to balance fan service and desperate attempts to get us to care about an ensemble cast that have little bearing on the core relationship between Jake and Amara and the central plot. The next entry, if it happens, would greatly benefit from a little restraint.

Pacific Rim Uprising is too tonally inconsistent and not exciting enough to justify its existence.
REVIEW SCORE
5
File Under: Universal