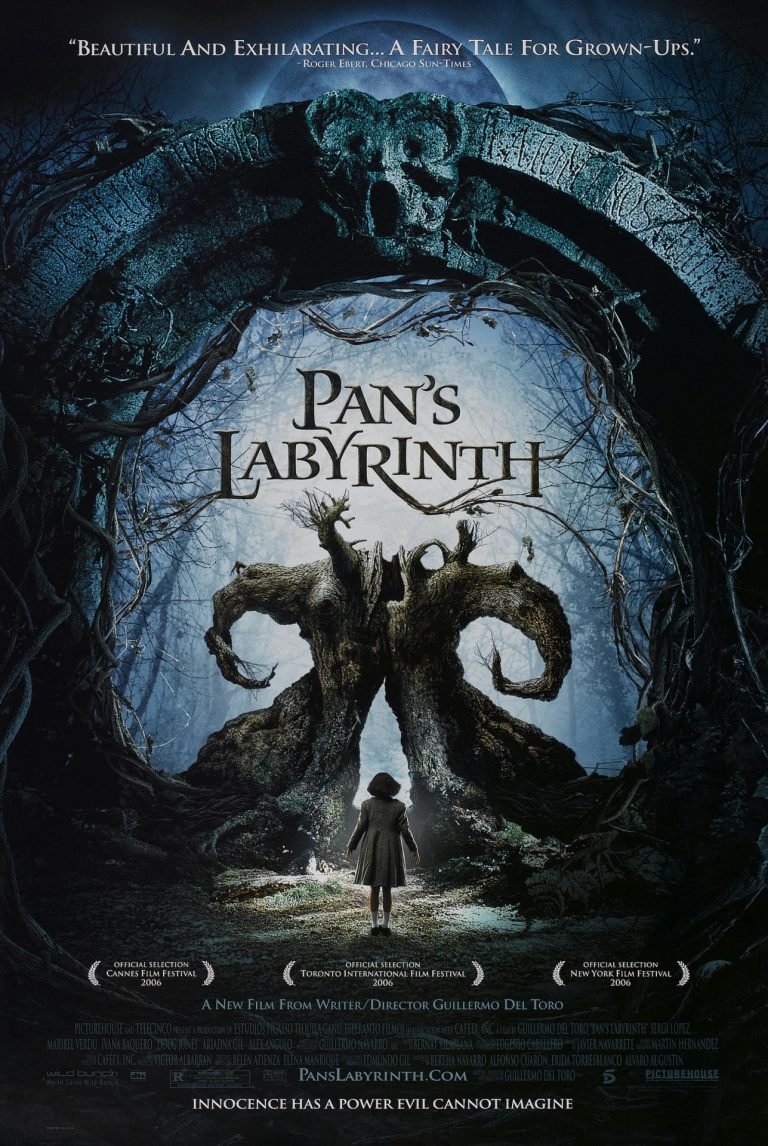 “Innocence has a power evil cannot imagine.” These words grace the tagline for Pan’s Labyrinth—a very powerful, hauntingly beautiful fairy tale for adults, and those not of the faint of heart persuasion. Guillermo del Toro, best known for the comic book action pics Blade II and Hellboy has crafted an eerily dark masterpiece that exalts the power of imagination and fantasy, wrapped up in the brutal violence of fascist Spain in 1944. Audacious in inventiveness and originality, del Toro’s vision is fully realized as a world both engaging and repulsive, where even scary dreams offer a sliver of hope for escape from the much more frightening real world in war time.

The time is 1944 and the place is the countryside of Spain where the fascist armies of Francisco Franco are routing out Republican guerrillas hiding in the foothills. Ofelia (Ivana Baquero) and her pregnant mother Carmen (Ariadna Gil) are heading to a country mill where they will meet up with Ofelia’s new stepfather, the sadistic Captain Vidal (Sergi López), head of the local army unit. Ofelia is a spirited girl who loves reading about fairy tales, but her mother believes that she’s getting too old for such fantasy and would rather see her daughter accept their new life with her new “father”.

Near the mill that’s their new home, Ofelia finds a labyrinth, in the centre of which lives a faun (Doug Jones) who recognizes Ofelia as Princess Moanna, rightful heir to the throne of an underworld kingdom. Ofelia must complete three tasks for the faun before she can return to the kingdom, but dangers presented by magical creatures aren’t the only ones that stand in her way.

Before getting into the obvious words of praise for the film’s technical merits, there must first be a word about the actors. Obviously they’re all great in their individual performances, but the two that really stand out are Baquero and López. In his native Spain, López is known as a comedic actor. I had to look that up of course, not being overly familiar with Spanish cinema, but honestly, you wouldn’t know it by his performance in Pan’s Labyrinth.

López is sadistic and cruel and just the slightest bit crazy, still though there’s a slight hint of charisma to him that makes you wonder what Carmen sees in him. I think Vidal deserves a spot in cinema history as one of the best fantasy movie villains; somewhere beside Margaret Hamilton preferably. Baquero meanwhile is incredibly grounded and never lets the fantasy overwhelm her. She looks as comfortable acting against the elaborate make-up of Pan as she does against Gil or even López.

Of course the real thing that astounds in this picture is del Toro’s elaborate and vital fantasy world. A combination of make-up, animatics and CGI bring the characters to life and part of the greatness of the film is taking them in with all their grotesque beauty. Interestingly, Pan’s Labyrinth was shot on a relatively cheap $17 million US and yet it is more alive and imaginative than movies with five-times its budget. The movie succeeds thanks to del Toro’s vivid realization of his world, there’s such a marvellous cohesive strength to the visuals it’s almost as if he did the whole thing himself. This is also a credit to the artists that worked with him as they were able to seamless interpret and execute the director’s vision.

Be advised though, gentle reader, warnings of graphic violence are not to be taken lightly as del Toro shies away from neither the brutality of the Spanish Fascists, nor the deepest, darkest nightmares of Ofelia’s journey. This may be called a fairy tale, but truth be told it’s grimmer than Grimm. There was a wee bit of controversy in Mexico when parents were bring their children to see the show, forcing exhibitors to put signs out front saying “not for children” (undoubtedly in Spanish of course). To be fair this isn’t the moral majority scene, but a fair reminder.

I’ve read the original Grimm and they’re nothing like the watered down versions we hear today, and Pan’s Labyrinth is in that tradition. Infinitely intriguing, disturbing as hell, and with plenty of imagination to spare, Guillermo del Toro rewards those willing to enter the maze of his fantasies in Pan’s Labyrinth.

Infinitely intriguing, disturbing as hell, and with plenty of imagination to spare, Guillermo del Toro rewards those willing to enter the maze of his fantasies in Pan’s Labyrinth.
REVIEW SCORE
9
File Under: