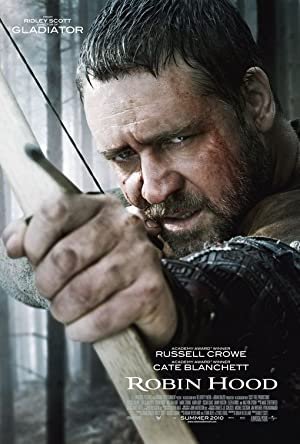 There are certain things you expect to see in a Robin Hood movie: an archery competition, the rich getting robbed, Merry Men living in trees, Little John fighting on logs, a flirtatious Maid Marion, a villainous Sheriff of Nottingham, and a whole lot of spandex. You’ll get none of these from this blockbuster adaptation. Admittedly, the lack of green tights is refreshing, but the rest is a major disappointment.

This new edition of Robin Hood comes to us from the high-powered director/actor duo of Ridley Scott and Russell Crowe. Ten years ago, these guys brought us the Oscar-winning Gladiator, which was a grand historical epic masquerading as a summer blockbuster. That’s clearly what they were trying to accomplish here, but they’ve failed. The problem is that the Robin Hood mythology is not suited to grand tragedy or history lessons. It’s a ripping yarn designed to thrill children, but sadly this film is dragged down by pretentious baggage that feels woefully out of place. They’ve squeezed the life out of Robin Hood with this overlong and self-important prequel.

Though marketed as a traditional Robin Hood story, this film takes place before the man becomes an outlaw. Just when Robin starts living in the forest with his merry men, the movie stops. Presumably they’re holding back the good stuff for the sequel but it’s highly unlikely this movie will be successful enough to warrant one.

So if this movie isn’t actually about Robin Hood, then what is it about?

Well, the opening scenes introduce a noble-warrior version of Robin Hood (Russell Crowe) fighting the Third Crusade. After his king dies in battle Crowe loses his reason to fight and flees, taking a few friends with him who end up having recognizable names like Little John. He soon stumbles onto the aftermath of an ambush and finds himself agreeing to take the sword of a dying man home to his father.

He ends up taking the sword to Nottingham where he meets a cold-hearted woman named Marion (Cate Blanchett). At the same time, the deceased king is superseded by his selfish son, who cares more for riches than the people. Eventually Robin Hood organizes a rebellion against this new king and then inexplicably ends up fighting the French alongside that same king in an epic battle that is only the second major action scene in the movie. That’s right, there’s an over two-hour gap between action scenes in a Robin Hood movie.

It’s understandable why Scott, Crowe, and co. chose to make a completely different interpretation of this well-worn tale. However, they should have tried to make something that bears more than just a fleeting resemblance to previous adaptations. It’s as if Crowe and Scott signed on to make a Robin Hood movie, then decided that they didn’t want to make one, so they just threw together an historical epic instead.

I would gladly watch a historical epic from those two talents set in medieval England, but don’t tell me it’s going to be a Robin Hood movie when it’s not.

It’s as if Crowe and Scott signed on to make a Robin Hood movie, then decided that they didn’t want to make one, so they just threw together an historical epic instead.
REVIEW SCORE
4
File Under: