Shudder was a more than welcome entry to the ever-growing world of movie streaming services, serving up nothing but horror titles with the click of a button. Since the service is starting to claim the exclusive rights to titles to send them straight to horror fans, we here at CGM have decided to keep are eyeballs glued to what indie and foreign horror flicks Shudder is serving. Previously, we took a peek at their glorious Sadako V Kayako (aka The Ring Vs. The Grudge). Today, it’s all about the new American indie horror offering We Go On.

The film comes from the two heading filmmaking team Jesse Holland and Andy Mitton who wrote, directed, and edited the impressive debut YellowBrickRoad. Now they are back with the creepy afterlife thriller We Go On, adding digital effects and composer credits to their names this time, just to be that much more efficient. Their sophomore filmmaking effort is both an impressively low-fi production and an increase in artistic ambition. This isn’t just a dumb-dumb scare picture, it’s a film with something on its mind, though unfortunately, it’s not always clear exactly what that “something” is supposed to be.

The movie stars Clark Freeman as a man who is beset by nearly every fear imaginable. He’s unwilling to drive a car, and barely even willing to leave his house, mostly communicating entirely with his mother (Anne O’Toole), while working as an infomercial editor from home. In an attempt to break his fears, Freeman places an ad offering $30,000 to anyone who can prove that there is life after death. At first, that leads him to a researcher (John Glover) hoping to awaken something by reviving a childhood trauma. Then he finds himself visiting a psychic (Giovanna Zararius) who seems more than a little unhinged. Neither pan out. Eventually, it’s an airport maintenance worker (Jay Dunn) of all people who offers Freeman that much-needed glimpse at the other side. Unfortunately, once the door is opened, Freeman can’t close it. Suddenly he’s surrounded by ghosts everywhere he goes, and the guy finally has a reason to be scared whether he likes it or not.

The film is beautifully shot and constructed by the filmmaking duo. The aesthetic falls somewhere between a grungy mumblecore drama, and a stylized haunted horror flick. Performances are all muted and quiet. Jesse Holland and Andy Mitton clearly want to ground their outlandish premise as much as possible, and succeed rather well (for a while anyways). They use sarcastic and skeptical humour to dismiss the ghosties until they appear and ensure that everyone on screen appears pained in a way that makes the movie emotionally difficult. By the time the ghosts arrive, it’s easy to buy into the supernatural premise. Handheld docu-realism combines with stylized suspense and scare sequences to keep viewers off balance (along with some impressively designed dead people). The generously paced 90-minute movie might take a while to get going, but once the scares hit the fan, there are plenty of effective sequences to keep eyes glued on the screen.

Where things fall apart are when the filmmakers get more ambitious than merely freaking out their horror-hungry viewers. The arty visuals and set up isn’t merely just style. The film is also supposed to be about the nature of fear and the lasting effects of trauma. It’s a clever idea, yet never really connects or lands as well as it should. The script is a little too vague and by the end, the plot is a little too melodramatic. It’s certainly more than welcome for Holland and Mitton to aim for more than mere stylish spook-outs, but their higher aspirations never quite gel as intended. At times the We Go On can even feel a little pretentious, which isn’t a great quality in a horror flick.

Still, there is something undeniably unnerving about the film that sticks. Jesse Holland and Andy Mitton are talented cinematic storytellers, and their mixture of psychological drama and haunted horror makes an impact that’s hard to deny if you give yourself over to the small and unconventional proceedings. It’s always nice when a horror flick struggles while being too ambitious given that outings in this genre frequently aren’t ambitious enough. We Go On might not be a breakout movie for the directing duo, but it further proves their talent and hopefully they’ll be able to show off their stuff on an even bigger canvas next time.

We Go On is a creepy and surprisingly thoughtful low-budget chiller sure to please fans of unconventional and arty horror yarns. 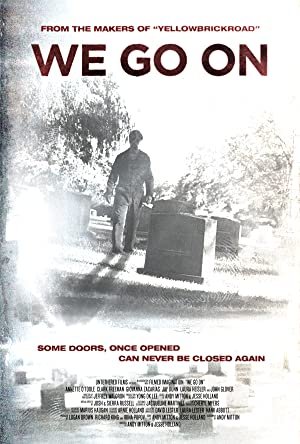