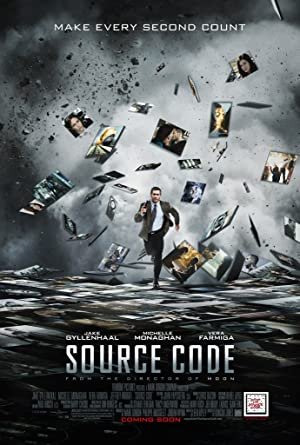 With the stink of the god awful Battle: Los Angeles still lingering in theaters, it’s such a relief to know that science fiction can be done right in the form of Duncan Jones’ Source Code. The film represents what the genre should be, not simply an excuse for large-scale ray gun battles (even though those can be pretty fun), but an opportunity to explore complex thought experiments.

The best works in sci-fi often center on a “what if” question. What if machines developed a consciousness?  What if what you perceive as reality is just a construct? What if dinosaurs could be brought back through DNA? What if you could go back in time and see your parents as teenagers and then accidentally almost bone your mom? The best science fiction movies start with a core idea like this and then build special effects and spectacle around it. Fortunately, Source Code is one such movie. In this particular instance the question is something like, what if technology existed that allowed you to enter the mind a person who died in a terrorist attack and relive the last 8 minutes of their life? Could you uncover or even change what happened? Ok, so that question might not be as concise as the others, but it’s still pretty damn interesting.

The film follows a soldier played by Jake Gyllenhaal who is taking part in experimental technology that allows him to do just that. He repeatedly enters into the mind of a man who died in a train blown up by a terrorist and is assigned to figure out what happened so that an announced subsequent attack can be stopped. Every time he goes into this other person’s consciousness he can alter what happened to get a better perception of the situation. He can’t change the future because the realities he’s tapping into run parallel to his own (whoa…heavy man). However, he can slowly find the cause of the problem and fall in love with that lovely looking lady sitting across from him 8 minutes at a time. Kind of like an action movie variation on Groundhog Day. But that’s not all, whenever Gyllenhaal wakes up from an alternate reality (or source code, hence the title) he’s returned to a mysterious room where he’s monitored by two superior officers who know far more than they’re willing to share. He can’t remember how he got there and he has no idea how to get out beyond repeatedly diving back into a source code. It’s all pretty fascinating, mysterious stuff, and delving any further would be going into spoiler territory that would be unfair to reveal.

Source Code is the second feature from Duncan Jones, David Bowie’s son (for reals), and the director of the fantastic sci-fi mind-fuck Moon. Jones’ debut was easily one of the best science fiction films of the past decade, reviving intellectual sci-fi from big screen dormancy and working in the sadly extinct field of optical model effects that still top CGI when done right. It has to be said that Source Code is not as good as Moon. Jones didn’t write the script so it’s not quite as complex, plus the movie was made through the Hollywood system and as a result he can’t make quite as many demands of his audience. However, what Jones lost in content he made up for in scale. Source Code boasts some big thrilling action set pieces that show off his directorial skill and will hopefully land him more jobs in the future.

The director also cast the movie well and got compelling work from his actors. Jake Gyllenhaal (Donnie Darko) is a rock solid conflicted action lead and Michelle Monaghan (Kiss, Kiss, Bang, Bang) possesses all the pretty and just enough substance to make for an appropriate romantic partner. While Gyllenhaal may be in nearly every scene and does most of the heavy lifting, Vera Farmiga (Up In The Air) and Jeffrey Wright (The Manchurian Candidate) are fantastic as the mysterious and possibly malicious superiors forcing Gyllenhaal to repeat his task without explaining how or why. The veteran character actors are perfectly cast, making the most of minimal screen time and creating complex characters out of roles that in lesser hands could have been merely plot exposition machines. Ben Ripley’s (Species 3) screenplay is fine, but goes off the rails a little bit towards the end. Considering all the complex moral questions raised by the film, things seem to wrap up a little too neatly and succinctly in a way that I’m not sure I buy. But, a happy ending was most likely a studio necessity and thankfully it doesn’t ruin the movie.

Make no mistake, Source Code is not a masterpiece. However, as far as big budget sci-fi action movies go, it doesn’t get much better than this. The story is clever, the effects are well handled, the acting is strong, and the direction never wavers. It’s a tense ride that gives your brain a little workout while you’re being entertained. In an ideal world all popcorn movies would have level of intelligence, but that’s just not the case and as a result Source Code is something special. If you’re a fan of the genre, you owe it to yourself to check this movie out. Duncan Jones is very quickly proving himself to be a master of this type of filmmaking and it’s exciting to see a new talent develop on such a large scale.

If you're a fan of the genre, you owe it to yourself to check this movie out. Duncan Jones is very quickly proving himself to be a master of this type of filmmaking and it's exciting to see a new talent develop on such a large scale.
REVIEW SCORE
8
File Under: