It’s been increasingly difficult to satirize the American political landscape. Shows like Veep started off poking fun at the “it doesn’t even matter” version of the political framework and ended in an almost slapstick sack of dick jokes in 2019.

The Purge, which came to us in 2013, put a scary spin on reality by fathoming a scenario where for one night a year, “all crime is legal.” It felt light handed at the time, positing that the wealthy were more able to protect themselves on purge night and making a Black veteran would-be-purge-victim the catalyst of the bloodbath. As time when on, the series continued to deliver films that removed the satire veneer and put purgers in red ball caps.

The task of satirizing America became increasingly morose, but the series inched deeper into its own messaging, culminating now in The Forever Purge. This newest installment comes into the world where a border wall was a reality, where immigrants were stuffed into cages, where after the presidential election, there was an insurrection at the Capitol. The Forever Purge stepped into this version of the world and left me thinking “satire is dead.”

The Forever Purge unflinchingly stays the course of the rest of the series with its on the nose messaging. There are uses of “bad hombre” and long shots of the border wall that feel like my nose is being rubbed in truth as if I wasn’t aware of it. We all have the friend who just discovered liberalism and shares with you the definition of “privilege.” This movie is that friend. But this is nothing new for the franchise that’s earlier films had a political party link their murder of “lesser” Americans to a church ceremony.

Adela (Ana de la Reguera) and Juan (Tenoch Huerta) are a Mexican couple working in Los Feliz Valley, Texas. They work in different capacities alongside other Mexican people for the Tucker family. Dylan Tucker (Josh Lucas) represents the “I’m not prejudiced” American type; he thinks all people of all races are equal, he doesn’t hate Mexicans, he just doesn’t think they should mix with white people. He’s sandwiched between his wife, Harper (Leven Rambin) and his father, Caleb (Will Patton) who loathe the New Founding Fathers of America and cringe at Dylan’s thoughts on their Mexican staff.

“James DeMonaco, who wrote the entire [Purge]series, is back.”

The night goes as expected, with trucks of killers pontificating about cleansing America, but after Adela returns to work the next day, she learns the event might not be over. She glances at an empty kitchen and asks, “where is everyone?” then steps outside to meet some purgers who didn’t cease when the sirens blared.

Fans of the night of killing have decided the purge is “ever after,” and continue slaughtering Americans in the street with the mantra of getting their America back. Soon, marshal law is declared, and the borders are about to clos,e so Adela, Juan, T.T. (Alejandro Edda), and the Tuckers make a break for the Mexican border.

The rest is a bloody and gunfire laden thrill ride that doesn’t leave so much as a second for you to catch your breath. The strength in these films has always been the balance of real fear with the satirical spin, and this film pushes a bit father when the lampoon dies.

Kill scenes are shot like surveillance videos, purgers looking like firing squads. It’s to the film’s credit, as it shook me to my core and made for effective scares. But it also made me taste vomit when I wasn’t prepared to see such real looking kills from an all-too-real movie. This series has always had a great mix of horror and fast paced action, and this installment is no exception. The kills hit, the sounds terrify, and it’s heart pounding enough that my eyes were peeled the full run time.

James DeMonaco, who wrote the entire series, is back. This time, paired with director, Edvardo Gout, a newcomer to the franchise. DeMonaco’s take on the world is ever present, and Gout has done cool work changing up the scares and action scenes. It fits comfortably in the franchise but has enough going on to feel fresh.

The primary villains in this movie are not the politicians, but the characters that feel like insurrectionists. There is a moment where Caleb Tucker is held up by purgers and he pontificates about the protected politicians pulling the strings and pitting impoverished Americans against each other.

It’s not subtle language coming from the “woke” patriarch, and pretty on brand for how the rest of the series has tackled real life. We all watched as the Capitol was infiltrated by insurrectionists not willing to accept election results. We watched the videos of the outgoing political party’s leaders wearing suits and drinking cocktails while it happened. This movie only spared us the champagne.

If you can stomach the grim view of America that feels increasingly real, this flick is worth the watch. It’s not boring, and there’s some catharsis in watching screeching racists get their throats slit on native lands. Though it portrays a bleak reality, it still comes with hope.

Mexican and Indigenous people work together to slay the villains and find comfort and a home. It dances a little close to the “racist learns Mexicans are okay, actually, after they save his life,” bit but it’s easy enough to take it as a lesson for the character in how casual racism can lead to death. There is almost no veil left between the series and life, so if you’re done with escapism and ready for the lesson in politics that this franchise delivers, check it out.

It’s near impossible to satirize this grim reality, but The Forever Purge tries its best. It’s a successful action-horror that has the audacity to try to look at our world through a twisted lens. 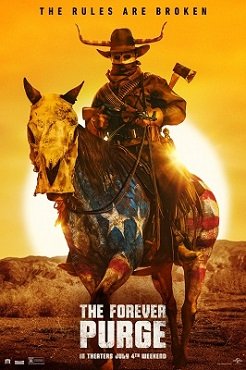