Forgiving But Not Forgotten 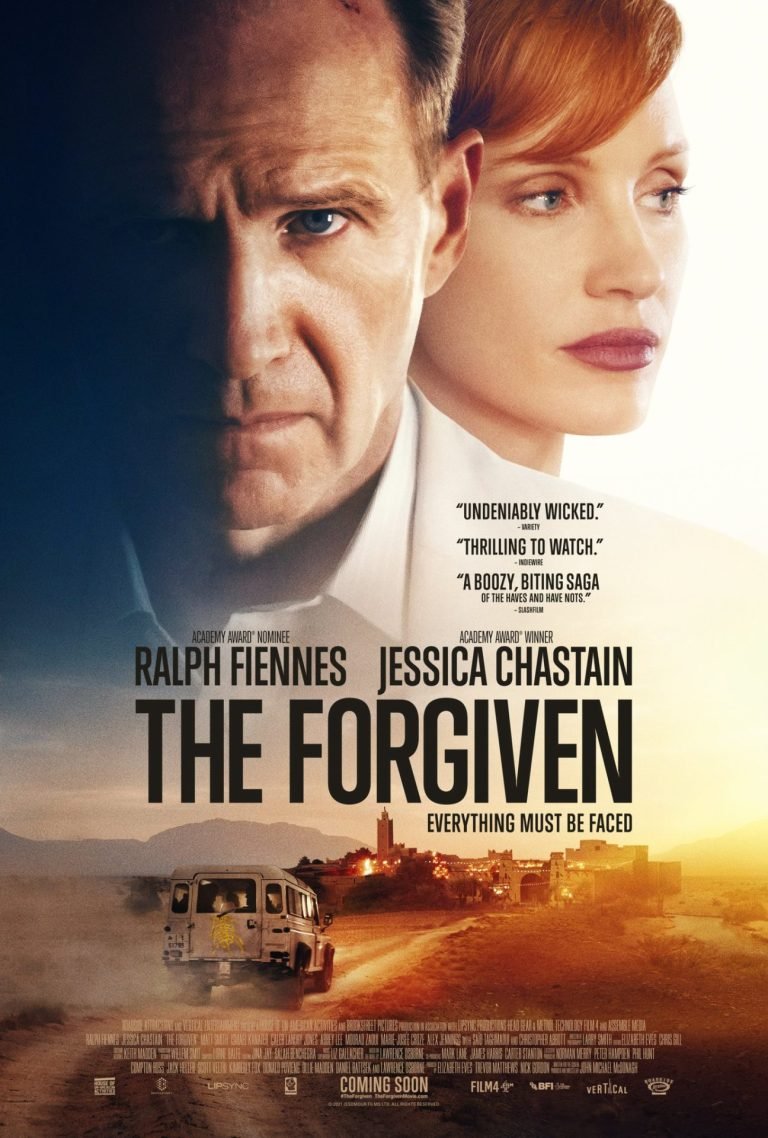 If you like pina coladas, spend some time in Morocco…wait, that was not the lyrics. Nothing about The Forgiven was about a traditional getaway party. The story took place over a weekend in the High Atlas Mountains of Morocco where David Henninger (Ralph Fiennes) and Jo Henninger (Jessica Chastain) are invited to a party in a  by old mate, Richard Galloway (Matt Smith).

From the beginning of the film, the tensions rose when a reckless incident led to the death of a young, Muslim boy that causes stirrings between the locals and the foreigners. I thought it was bold and provocative to begin with the conflict, then spiral into various other points of escalation found throughout the story. In a sense, it gave more time for the interpersonal stories to be explained and weaved throughout.

The way the plot in The Forgiven had two contrasting scenes going at the same time after the incident was a curious choice. I found the party scenes that juxtaposed the tense moments David endured on his travels with Anouar (Saïd Taghmaoui) and Abdellah Taheri (Ismael Kanater). I thought it was silly to have the sombre scenes with David offset with the party scenes containing the rest of the cast. Also, shoutout to Taghmaoui for an amazing execution on being the primary co-star with Fiennes as David split off from the party goers — I enjoyed his other works in the first G.I. Joe film and recently in DC’s Wonder Woman movie series.

I appreciated a lot of the popular media references in The Forgiven from David watching an iconic scene from The Walking Dead where a titular character is beheaded by the season’s villain due to the poor judgment of the protagonist. There was also a scene where David sees a toy replica of a Dalek from the Doctor Who series. These little pop culture grounded the film for me as someone who could not fully grasp the Moroccan locals’ religions, traditions and omens.

However, this was made clearer when the character Abdellah Taheri (Ismael Kanater) explained how some Moroccans praised the finding and selling of fossils found in the desert as they provided lots of money from foreigners who buy them. The same people referred to the special, rare fossils as “Elvis” because they were like the superstar fossils—another great pop culture.

“The Forgiven is an absolute thought-provoking drama…”

But he explained to David that there are also others who saw these fossils as bad omens or they were fossils of old demons bringing bad luck. I thought this explanation was interesting and shed light on how society could deem something precious while others the opposite—sort of the debate with money.

With a stellar cast, I found the experience of The Forgiven to be really introspective to say the least. Fiennes’ performance as the rich and arrogant man depicted a believable experience throughout the journey his character took. The same could be said with Chastain’s portrayal of Jo, and how her compassion and naivety reflected against her other traits. Smith faded to the background in this film enough for what his character was worth—being the party host who just wanted to sort out the mess and carry on with his partner, Dally (Canadian star, Caleb Landry Jones).

I found the snippets of dialogue and storytelling from Abdelleh, Anouar, the head butler of Richard’s estate, Hamid (Mourad Zaoui) to the other estate house members the most fascinating aspects of all. I thought all their different narratives and morals provided me with an enriching depiction of the struggles real-life Moroccans have gone through — especially with the stunning backdrops and visuals of the movie being filmed on-location in Morocco. Hearing all these stories with the direction and writing from John Michael McDonagh were smart, powerful and engaging.

Most of the party people’s conversations were so pretentious that it made me angry that people like this really exist and have these talks. I thought it was riveting to hear some of their prejudices and viewpoints as it reflected many of the views and hate crimes that continue to take place in the real, current times. The Forgiven is an absolute thought-provoking drama that will keep you on your toes and eyes rolling when the party continues.

If you like a story that provokes you to be reflective on prejudice and atonement within the upper echelons of privileged peoples, then The Forgiven will be the perfect film for date night or other occasions.
REVIEW SCORE
8.5
File Under: Movie Review, TIFF