The Girl from the Other Side Review – Fantasia 2022 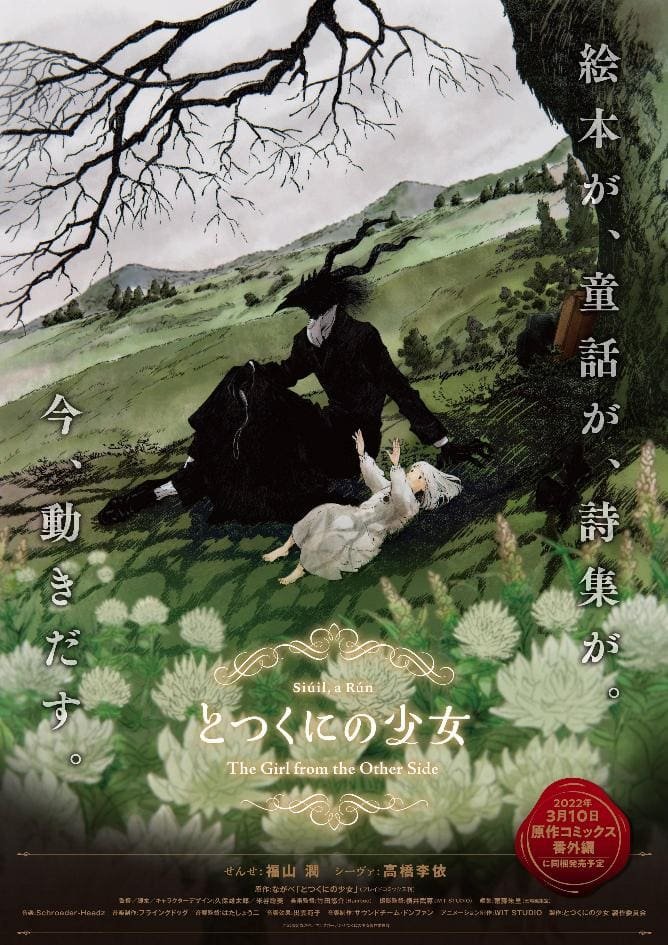 The Girl From the Other Side, directed by Yutaro Kubo and written by Satomi Maiya, is a beautiful and heartwarming tale of friendship and innocence. Based around a manga that was written and illustrated by Nagabe of the same name, The Girl From the Other Side (Totsukuni no Shoujo) is a movie well worth a watch due to its stunning art, interesting concept, and touching story.

The Girl from the Other Side wastes no time, diving straight into the dark and mysterious world. This is the world of the outer lands, a place where twisted beasts known only as the Cursed live, away from the rest of the world, hidden in the shadows of the overgrown trees. It is here a young girl named Shiva finds herself lost, with no clear way home or how to keep safe in such a place. Thankfully, she manages to find safety with a Cursed one, who saves her by taking her to his home.

While the Cursed are dangerous, able to inflict others through a simple touch, Shiva’s saviour is something much different. A kind soul who is filled with warmth and tenderness, he wants only to keep Shiva safe, and away from the dangers that lurk in wait. Due to his kind ways, Shiva takes to calling him ‘Teacher’, and the two quickly form a bond that leads them to not only discover one another, but themselves.

“Animated by WIT Studio, The Girl From the Other Side (Totsukuni no Shoujo) is a stunning work to behold.”

Animated by WIT Studio, The Girl From the Other Side (Totsukuni no Shoujo) is a stunning work to behold. There is such time and effort put into every frame of the story, it feels like a painting come to life. From the dark hazy twilight of the forest of the outer land, to the look of the cursed, WIT Studio does a wonderful job capturing the art style of the manga on the big screen.

Based on an 11-volume manga, the film tells the tale in a way that is engaging and full of subtle meaning. The quiet fairytale is haunting and touching in its simplicity. There is a lot to love about how the narrative unfolds, and the painterly art style makes everything have a subtle beauty like an old story being brought to life for the first time.

The film spends most of its runtime focusing on the simple interactions between Teacher and Shiva, giving a sense of their bond, and the trusting relationship that develops from that. There is a lot to love about these two interacting, giving a sense of true tenderness and maturity that is often lacking from animation like this.

While not a long film, The Girl From the Other Side is filled with striking moments, great dialog, and some of the most stunning animation I have seen on the big screen. If you have a chance to see this film at a film festival, or at home, you do yourself a favour and give it your undivided attention; you won’t be disappointed.

The Girl From the Other Side is a stunning film that shows the true potential of animation at bringing complex and tender stories from the page to screen.
REVIEW SCORE
9.5
File Under: Fantasia 2022