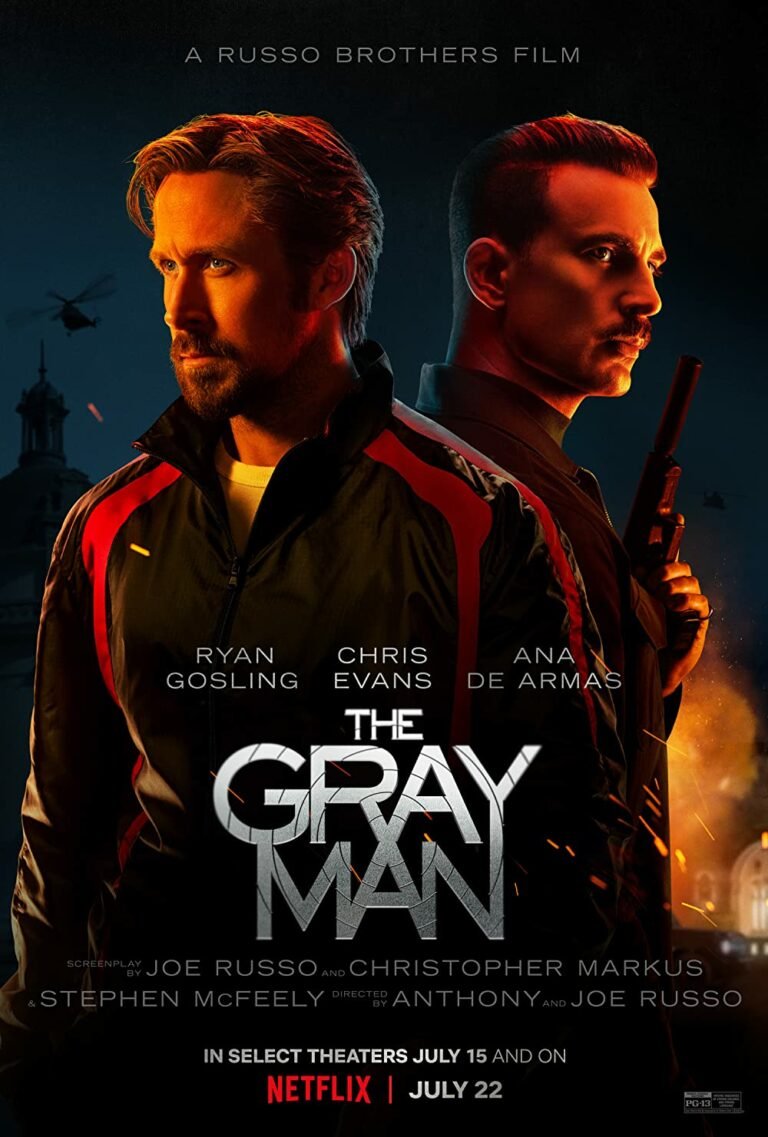 The Russo brothers are at an interesting point in their careers right now. The former Community directors hit it big, directing several of the MCU’s biggest hits. After a brief detour at Apple+ with the Tom Holland crime flick, the pair are now teaming with Netflix for The Gray Man, boasting a 200-million-dollar budget and a would-be attempt at a big new franchise.

Ryan Gosling plays the titular Gray Man in question, an agent code-named Sierra Six. Six is a convict who, in exchange for a commuted sentence, becomes a CIA assassin-for-hire. Fast-forward 18 years, and Six’s old boss/mentor Donald Fitzroy (Billy Bob Thornton) has been replaced with the ambitious Denny Carmichael (René-Jean Page). After a hit job in Bangkok against another Sierra agent, Six is given a USB key containing many of the CIA’s dirty little secrets. Not wanting his own secrets exposed and already on a path to end the Sierra program entirely, Carmichael launches an international manhunt against Six, the task being led by bloodthirsty bounty hunter Lloyd Hansen (Chris Evans).

The Gray Man owes a lot to the other spy films of the past few decades: the Mission Impossibles, the Bournes, the Craig-era Bonds, etc. The problem is it doesn’t do much to differentiate from those other flicks. The script, written by Joe Russo alongside fellow Avengers scribes Christopher Markus and Stephen McFeely, is just cluttered with nearly every generic espionage trope in existence, from the expected double-crosses, black ops missions, and so on. The same generic sensation applies to the characters Sierra Six just feels like Ryan Gosling is more or less sleepwalking as a generic cool-guy. The government agents feel like they only exist to yell in front of computer screens and cell phones.

Along the way, Six is also helped throughout his mission by CIA field agent Dani Miranda (Ana de Armas) and while this gives Six someone to bounce off of, their back-and-forth doesn’t feel like it has a spark to it. The pacing is also all over the place. The movie will randomly do extended flashbacks to flesh out Six’s backstory and to establish a protective, father/daughter-type relationship between him and Fitzroy’s niece Claire (Julia Butters) that feels like it was added after the fact.

“While The Gray Man isn’t as mind-numbingly generic as other Netflix blockbusters, it sadly comes close.”

The only characters in The Gray Man that feel like they have anything resembling a personality are thanks to Chris Evans’ Lloyd and Tamil star Dhanush’s Avik San. Every time Lloyd is on-screen, it feels like he wants to grow his moustache even longer just so he can twirl it while he’s doing something evil. It doesn’t always work, but it feels like he’s bringing the most into it. As for Avik San, he’s the standard “assassin with a moral code” but he comes in with a cool factor that almost immediately eclipses Six’s, and he’s in the movie for a handful of scenes at best.

The Gray Man does have a few other bright spots. A mid-film chase/shootout throughout downtown Berlin is impressively hilarious in its level of chaos and destruction, and the fight choreography overall is solid throughout; the most impressive being a fight between Six and Miranda versus Avik. Unfortunately, that’s about where it ends. The other action scenes aside from those previously mentioned aren’t bad, but they fall into the same generic basket as the rest of the movie.

Worst off is the big third action sequence – a nighttime raid in a castle – is very poorly lit, leaving you struggling to figure out what’s going on for a good chunk of it. The Russos try to add some dynamic flair in the action by using drone cameras, similar to what Michael Bay did in Ambulance a few months ago. However, unlike Ambulance, it never feels like they take well-enough advantage of it as Bay did. The drone shots in The Gray Man were mostly to establish the geography of a location and that’s about it.

While The Gray Man isn’t as mind-numbingly generic as other Netflix blockbusters, it sadly comes close. The highly talented cast and crew can’t overcome a generic screenplay, characters and literally everything else. This movie will more than likely just be a random grey blank spot in your memory within a few days.