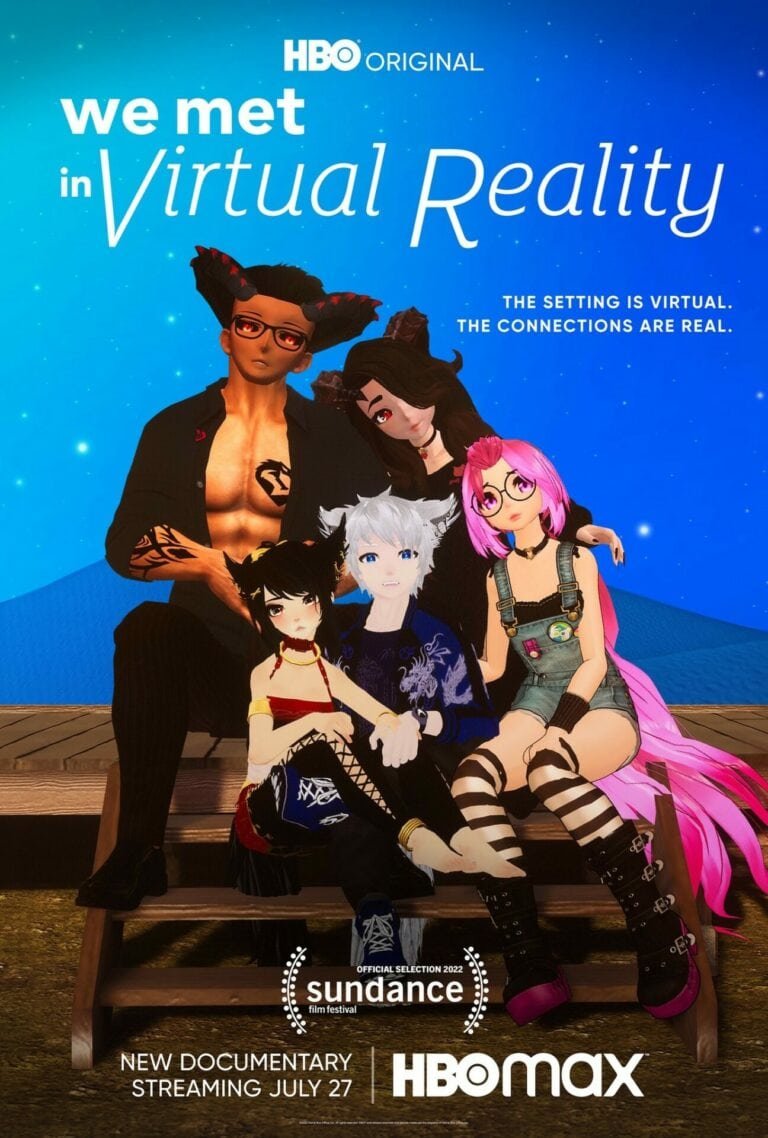 I was roughly eight years old when I tried VR for the first time decades ago. It was for a racing game at a local fair, and the experience wasn’t great, if I’m sugar coating it! It was an early period for the technology, but I was enamoured by the concept. In fact, it wasn’t until I used modern touch remotes in the last few years that I really started to believe in it. We Met in Virtual Reality explores a lot of those same concepts of the wonders of burgeoning technology, and adds a lot of heart to ground it all.

Billed as a “documentary filmed entirely in VR,” creator Joe Hunting brings us into the world of VRChat: a program that’s available on multiple platforms, and serves as a literal VR chatroom for people with various avatars, and various “worlds” to explore (some of which have activities or traditional “games” to play). But VRChat is largely what the community makes of it.

There’s an actual digital recreation of a K-Mart store with “employees” that role-play for “customers.” There are users who teach sign language and various forms of dancing in VRChat. Hunting hangs out with the latter two groups in the documentary itself (and more), and explores the phenomenon of virtual avatar representation, loneliness, and human connection along the way.

It’s kind of cheating in a sense, but the medium itself is fascinating enough to propel the documentary past some meandering portions. We Met in Virtual Reality is largely a carnival ride (which is conveniently an actual segment in the documentary itself), told by the people who inhabit it. Their stories are at the forefront, and Hunting manages to pick out people who are either interesting enough to watch for an hour and a half, and/or actually believe in their convictions enough to root for them.

“But the people featured in We Met in Virtual Reality are doing their best to showcase some of the best elements of humanity, and that sometimes, a real connection doesn’t have to be purely physical.”

We Met in Virtual Reality is a tough documentary to take apart because there’s so much to unpack. The way that the avatars can interact (with full body movement), the hand gestures that are possible as a result of the Oculus Touch/Index controller technology: it’s still very much uncharted territory.

This is literally the case with IP aesthetic considerations, as a heap of avatars in the world of VRChat are modelled after existing characters, allowing We Met in Virtual Reality to serve as a window into the wild west of the medium of VR chat before it starts to see more regulation (or competition from the so-called “Metaverse”). It leads to a lot of unpredictable moments in-between the hard-hitting core stories (which often deal with real experiences with loss).

Its biggest strength is in its genuine tone: the goodwill of the presentation will stay with you throughout the runtime. Hearing a former alcoholic talk about how dancing in a VR world (which is more accessible than getting involved in many real-life groups) helped save them from themselves isn’t something you witness every day.

It’s been a while since I was this impacted by a documentary. If you logged into a random VRChat world right now, you might be greeted by an adult yelling profanity at a child, who is in turn yelling racial slurs. As a result of extended research for this review, I ran into this situation twice in a row; it’s easy to feel down after experiencing something like that. But the people featured in We Met in Virtual Reality are doing their best to showcase some of the best elements of humanity, and that sometimes, a real connection doesn’t have to be purely physical.

Even if you aren’t remotely interested in VR, you probably will be by the time We Met in Virtual Reality ends.
REVIEW SCORE
8.5
File Under: Documentary, VR