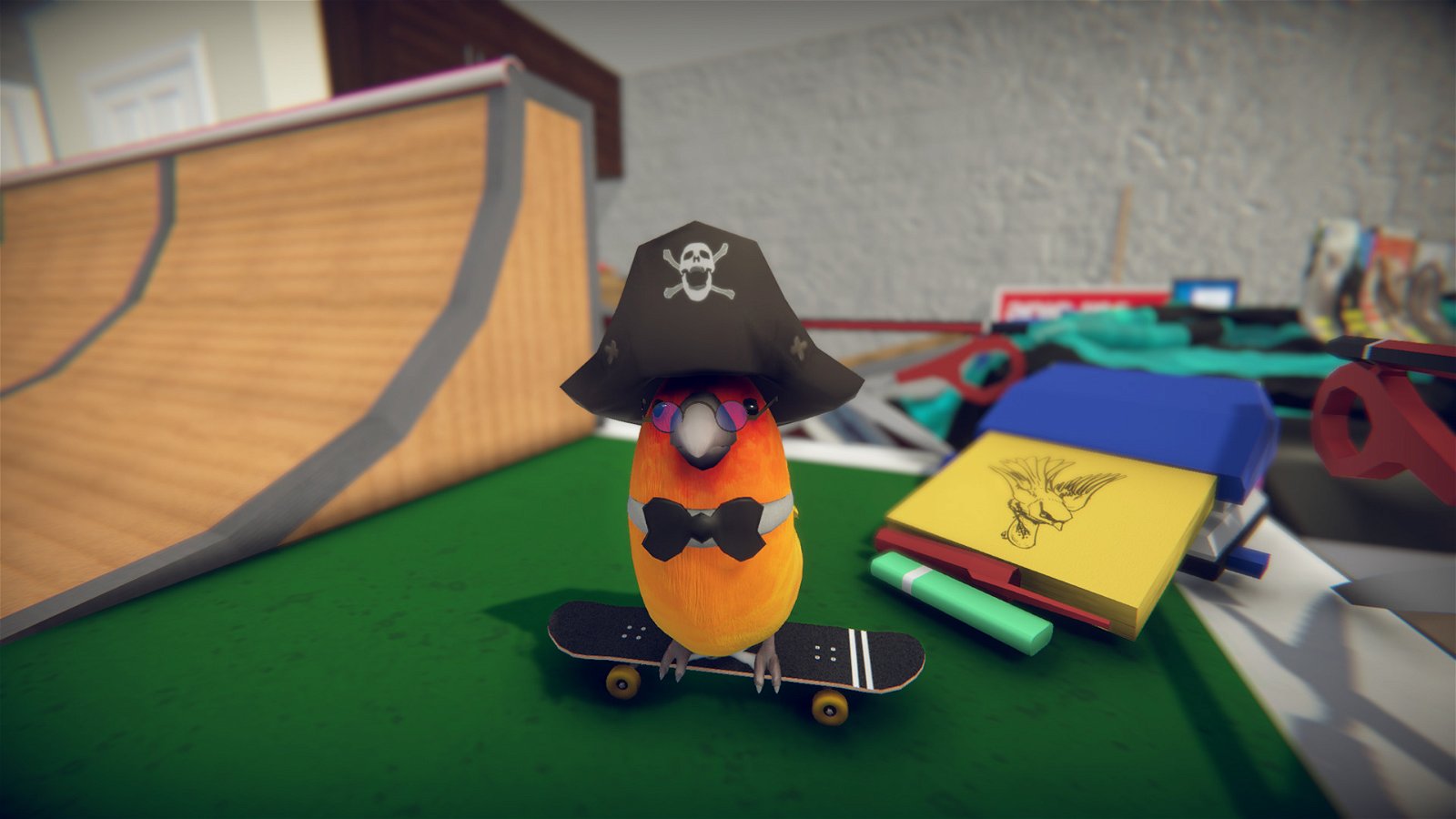 What if you were the pet of a skateboarder who hung up his board? What would you do? Would you take up a board for yourself and skate in a tiny park made of household items? Why would one ask themselves this question? Because the people at Glass Bottom Games have made just such a game for you; SkateBIRD!

Take control of a small bird on a smaller board in this skating game where you can grind on bendy straws, ride cardboard half pipes, jump over staplers and more as your bird tries to cheer up its owner after giving up skateboarding in favour of a job that he hates. The game has the feel of a Tony Hawk’s Pro Skater with the look of the old Micro Machines games.

When you get started, you get to customize your bird. You can choose from a number of different birds, and then accessorize them with hats, eyewear, scarves and more to give your little bird a fun and distinct look. Do you want your bird to be a pirate? Perhaps a hipster? There are a lot of options. I made mine a punk. Why? I’d never seen a punk bird before.

“The SkateBIRD environment is a lot of fun.”

The SkateBIRD environment is a lot of fun. I compared it to Micro Machines in that you are controlling a small entity in a large world, and it adds a small sense of joy to the gameplay. As you make your way around what appears to be a living room, and you do a kickflip over an alligator clip and notice what it is you are navigating around, you get a sense of amusement that a guard rail at a library just wouldn’t give you.

There are multiple parks to unlock which, I am ashamed to say, I failed to do in my time with the game. It turns out that I am as coordinated on a virtual skateboard as I am on a real one. There are, however, a number of additional, bird-sized parks to unlock and help keep the game fresh.

As you play through the game, your performance will lure other birds to come check out your park. You can also find items as you explore the parks, including more clothes to accessorize your bird and secret mixtapes of music to add to your soundtrack of what Glass Bottom calls “Lo-Fi Birb-Hop.”

The gameplay is similar to the aforementioned Tony Hawk’s Pro Skater. You hit buttons to initiate certain moves and use the control stick to manoeuvre the bird so that he sticks the landing. A concern I had while playing on the Switch is that the controls listed in the corner are so small in portable mode that they can barely be read. It is fine on the big screen, though.

The physics of the game are tricky to get used to if you are not used to this type of game. There is little margin for error if you wish to land a trick, so you have to learn how to land the trick the same way that you would in real life; by falling. A lot. Sure, it’s a bird that should just be able to fly off if need be, but alas, if you mess up, you watch the bird hit the deck.

By comparison to other skating games, I would venture to say that SkateBIRD is still easier to control as it is not as focused on its realism since, well, it’s a bird on a skateboard. That’s not to say that you can’t do some cool tricks that you might find in a Skate Park or in another game. You are just navigating the difference between having hands VS having wings.

The graphics are good for an indie title. It is neither hyperrealistic nor does it look like Glass Bottom cut any corners. The details are all there, but the graphics are such that environmental elements are noticeable without becoming any sort of distraction when you are focused on tricks.

Overall, this is a fun indie game with an interesting behind the scenes’ story. The people behind the game made a Kickstarter to fund the game and achieved their goal in a single day, more than tripling their goal overall. They also had to delay the release by a year due to delays caused by COVID-19.

The game will be released on September 16 and will be available for the Nintendo Switch, X-Box systems (also available on Game Pass) and on PC via Steam. It will cost $19.99 USD to purchase.

SkateBIRD offers a similar skating game to some classics, but with a twist that can make it fun for people who don’t particularly follow the sport and its athletes. Plus, it’s just cute to see a bird with a Mohawk on a skateboard.

File Under: Glass Bottom Games, Skatebird, Sport
A retail version of the game reviewed was provided by the publisher. You can read more about CGMagazine reivew policies here. 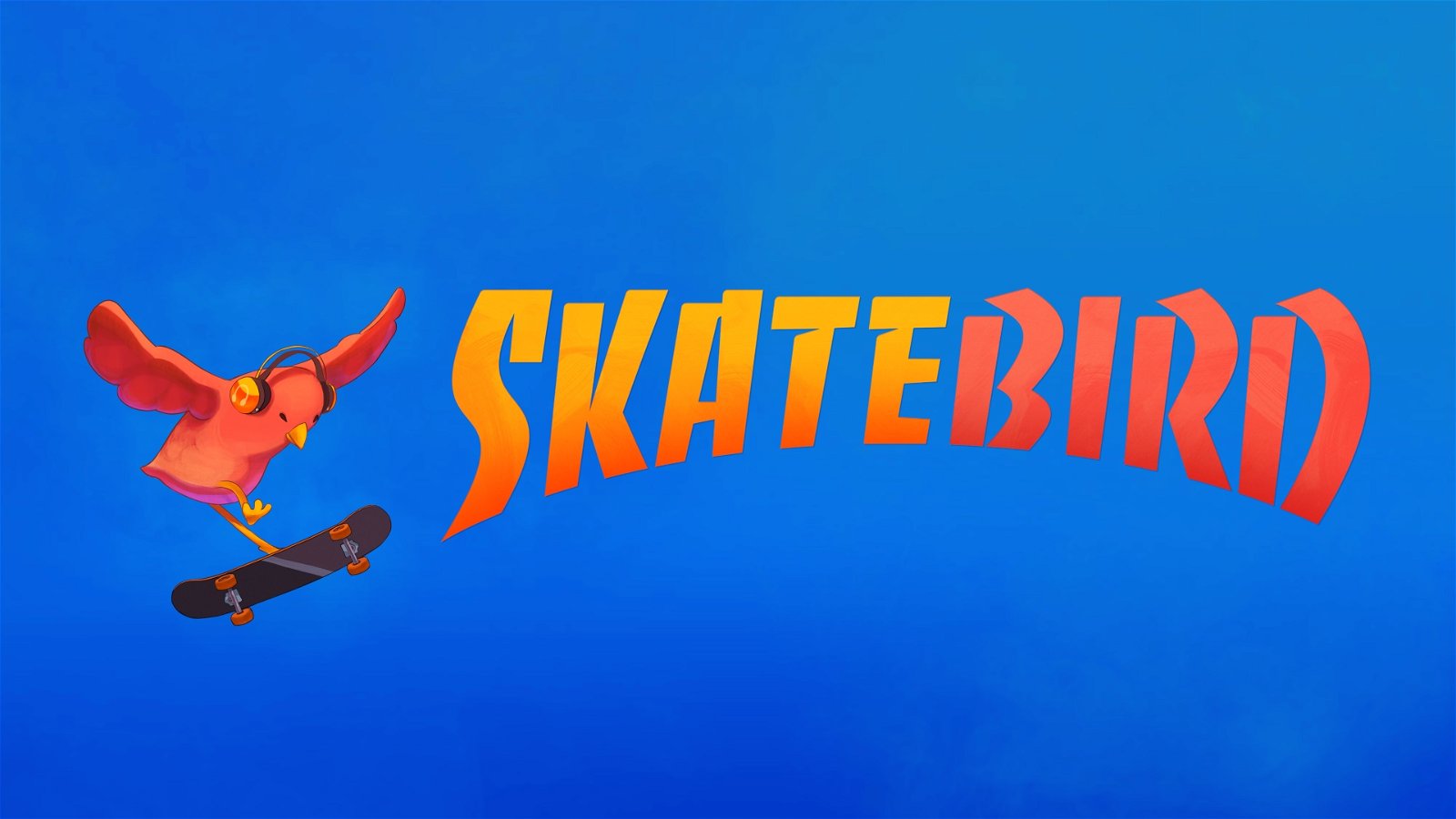