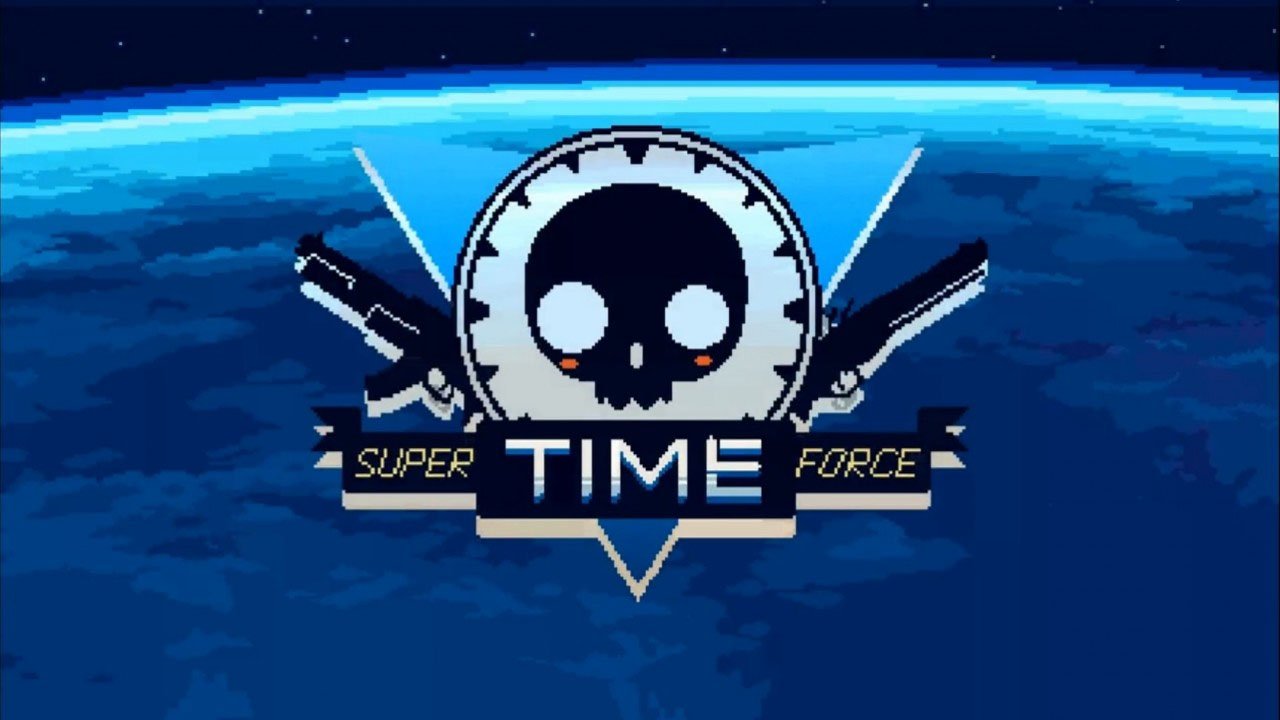 There are a lot of retro-style games out there. Nostalgia compels us to make games that recapture the limited, rough-edged pixel-art common several decades ago, but with enough quality to appeal to our current sensibilities now that we have the options for far better. I have to say, most such games tend to spread the parody thick, layering game-culture and 80s/90s pop culture references thick. Super Time Force is no exception to the rule.

There’s no denying the blocky art is attractive. Like many retro-pixel games, the art is far more complicated than one would get in the hey-day of the Nintendo Entertainment System, while retaining its  simplicity. Characters are square caricatures of people or machines, but are in stark contrast to the sheer colour range of the levels involved. Walking through a medieval castle (and later, the clouds and golden gates of Heaven) or a Mad-Max inspired landscape complete with Route 66 signs and broken highways is entertaining, especially when you blow up a chunk of it. It’s colourful and bright, and highly variant – mostly because the plot makes absolutely no sense.

It won’t do to explain here, as the story of Super Time Force is merely a vehicle (much like the time machine that carries you from era to era) for exploring wildly different vistas across time, that have little to no bearing on actual history. The opening scrawl covers all the salient points well, but for the sake of review, you and your team travel through various eras of time, fighting through armies of time-travelling robots and whatever denizens take issue with your devil-may-care attitude to paradoxes. The humour’s primarily anachronistic and is all right, but some of the scenarios fall flat to me, lacking impact due to their non sequitur nature. I adore puns, but most of them are time-related and it gets tedious near the end. I understand the game’s supposed to be strange and off-the-wall, but its weirdness didn’t always make me laugh.

That aside, the game is quite fun to play, especially when you learn how to use the main time-loop mechanic. You have 60 seconds in every level, not including pickups, but your ability to rewind time – and replay it while your previous incarnation goes through the motions you performed while controlling it – allows you to speed up your effective progression, collect items off the beaten path, and even save your previous incarnations from death (and add their skills to your own for your current thread of action). It’s not always required that you combine three different sequences of actions to complete a puzzle, but it helps to collect items and to eliminate bosses more quickly. Final area bosses require multiple characters to complete and some thought into how to react with foreknowledge of the direction of its attacks. I found it somewhat complicated at first, and the business of every map, with its wild explosions and firepower raining about, tends to result in several unseen deaths.

I did find myself using the initial three starting characters most of all, even though there are others you can pick up along the way, each with their own unique attack mechanics and gimmicks. Their designs are distinct and striking, but I found only a few of them to be truly useful, with others being limited by their move-set or to highly-specific scenarios. Because there’s no limit to how many times you can create temporal clones of a character, it’s a bit too easy to spam the best character for the job. I would have liked the options to be more balanced, to give more incentive to use your entire roster, but I suppose you can’t design such a game to require secret characters.

Overall, I enjoyed this game. The time mechanic is pretty entertaining when you get the hang of it, and it’s pretty hilarious to watch, revelling in its silliness and evoking the feeling of a fun, browser-based arcade game. It’s pretty short, relying on collecting items and replaying levels for time for re-playability, as well as a ‘hardcore mode’ in case you want more, but I think that length is suitable for what you get. The last levels make the best use of the time mechanic and your limitations, but the previous ones seem strangely easy, even without making full use of my time-stops every time. All in all, it was entertaining, but not engrossing – I didn’t feel a need to keep playing beyond the first time, to go back and explore or repeat to unlock more characters. Granted, I felt the same about Braid, which was beautiful, and cleverly designed but seemed too mired in its interwoven messages. Super Time Force is a fun romp while it lasts, but it’s a short romp.
It’s worth a look, if only because you get to abuse time-travel and cause massive damage. And if you like pixels, it’s got some nice ones.

It won't do to explain here, as the story of Super Time Force is merely a vehicle for exploring wildly different vistas across time, that have little to no bearing on actual history.