Syfy’s Channel Zero has been a unique rollercoaster ride; there’s been ups and downs and even a stall or two on the tracks but it’s finally come to an end. Has the good balanced out the bad in the long run? That’s a little difficult to say.

We open to Eddie reading an excerpt from Treasure Island to Mike on the bed. Eddie says that he never thought Long John Silver was evil. Mike replies that Silver is a rouge and a murderer to which Eddie says that he gets why he did what he did and that he was looking out for himself. Mike states that Eddie grabbed onto a darkness inside of him but Eddie states that the bullies were the ones who let it out. When Mike up, he knows exactly what to do, he must go into Eddie’s world but first, he must ask his mother for a favor. Meanwhile, Gary and Amy search the woods for Mrs. Booth, only to be surrounded by the missing children.

Where exactly do I begin with the finale of Channel Zero? This show has proven to be a wonderful and brilliant yet convoluted and inconsistent mess but I suppose when you’re dealing with supernatural forces beyond your comprehension, things tend to get a little nutty and I think that was the main problem. The source material wasn’t long and overly complex to begin with, it just was what it was; a simple horror story of no consequence. The writers only had to stretch it out for six episodes but it still felt too drawn out and pointless. I believe it’s a case of too many cooks in the kitchen in an attempt to make something grand and frightening but all it did was leave the story lacking focus. That lack of that focus triggered a whole slew of pointless plot twists, characters and at times, downright ridiculous imagery (I’ll get to that in a minute). Not to mention the handful of things that still weren’t explained and the plot lines that just kind of…ended. 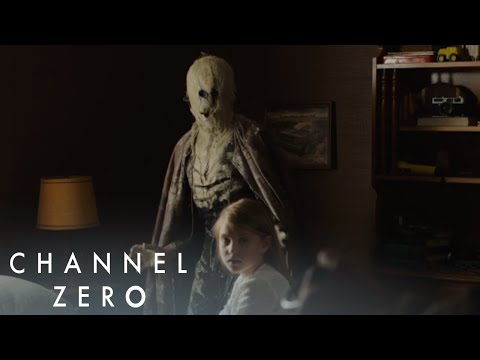 I’m still trying to wrap my head around what the deal was with the child army. Eddie clearly had enough power and influence to take command of the kids in town yet did nothing with it? The kids do kill a couple of people but then that story just ends. Gary even gets his kids back on his own like it was some awkward hostage situation. Nothing else is done with the kids, they don’t take over the town or go out into the world or anything, they just kind of murder and stop, it’s like they’re not even a threat after a certain point. For that matter, what was even the point of Mrs. Booth? Was she just around to help round up the children? Even so, Eddie can control them, it didn’t seem like he needed any help in that regard so why? She wasn’t even that much of a hindrance to Mike and Marla since she’s mortal so her plot line just kind of ended as well.

Speaking of Eddie’s power, the writers didn’t bother to explain the extent of it. I understand that it was always there and that anger brought it out blah blah blah but how did he figure out he had it? How did he even figure out that he got stronger with every one he killed? Why did he become stronger that way? Why even make Candle Cove to begin with when he doesn’t even need to be around to take over people’s minds? Was he only able to manipulate children? I would have appreciated an episode entirely devoted to that, considering Eddie and Mike are the only characters I actually cared about and you know, character development is important. Don’t get me wrong, some things are better left a mystery but it would have made Eddie more relatable if we got an understanding of his developing strength. There’s a saying that nobody thinks they’re evil. In everyone’s head, there’s a justification for doing what they’re doing. But in Eddie’s case, there wasn’t really a justification other than his own selfishness so the entire opening scene of episode six is invalid.

Even the creepiness in this episode made no sense. Mike is able to go into Eddie’s world thanks to Eddie/Tooth Child crawling inside his body and forcing him to take a nap. When Mike wakes up he’s in some Shining hotel where all the doors are locked except for Eddie’s room and it’s a disgusting, Silent Hill-style mess with flesh strung up all over the walls. Eddie’s a kid and this is his world, just why in the hell is his world so god damn terrifying and disgusting? It would have been amazing if his world was in a pirate cave or on a ship because it would have fit the whole story. It still would have been creepy without going for the typical “he’s evil so let’s give him a hellscape to inhabit”.

On top of that, the imagery just gets silly when the “real” Jaw Bone/The Skin Taker appears. He looks absolutely nothing like his puppet counterpart; he’s covered in skin? Rags? I don’t even know but it makes him look like a last-minute Halloween costume. And all he does is run around the hallway screaming at Mike, turn into a weird bush fire, and then awkwardly follows Mike around while shoving sticks into his face. Seriously Channel Zero, this is what you call spooky? I found myself laughing the whole time at the absurdity.

So what exactly was good about the season finale of Channel Zero? For one, the characters (the ones that mattered) and their relationship between each other. Amy was smart, brave, calm and collected during the ordeal with Mrs. Booth and the children. Marla showed fantastic emotion during her fight with Mrs. Booth, even spouting some great lines at her when Booth said that she had been talking and being Eddie’s mother the whole time. Marla retorts back with, “You gave your son away! You aren’t anyone’s mother!” Not to mention the ultimate choice she makes in the end by keeping her promise to Mike. It was the absolute best acting I’d seen from her. But the best development was Mike and Eddie’s, despite that it wasn’t give a ton of screen time. The way the two young brothers (and even adult Mike talking with child Eddie) had great chemistry and bounced off each other well even in the dire circumstances. The series as a whole and even episode six hammered home the nature vs nurture argument. Mike and Eddie were their experiences but they still chose how those experiences affected them. Mike used his to help children while Eddie allowed his power to consume him like a drug. He could have done so much more.

Second, the ending. It’s a take it or leave it ending but I personally found it not bad. It’s so simple you can see it coming from a mile away but yet because of its simplicity you wouldn’t think it ends the way it did. It didn’t end in some massive battle and thank god for that, there’s only so much stupidity one can take. However I wish they would have expanded the fact that Eddie’s world was also Mike’s and that Mike could have manipulated it as well but then again, Mike’s powers are still dormant so it does make sense but it seemed a little pointless for him not to even try. The ending its bittersweet but it ends properly.

To sum everything up; Channel Zero is a binge watch show. The pacing is all over the place so it dragged on week by week and since it’s short it’s fine to binge. Channel Zero was is on the not-bad scale. It wasn’t fantastic by any means but it wasn’t garbage. I feel if they had slightly better actors and took more risks and went through with some of their ideas it would have been a million times better than what we received. I’m hoping No End House for season two is better. Channel Zero may have worked better as a two-hour made for TV movie.

For what we received; it’s fine. Episode six wrangles up the absurdity while adding some of its own.
REVIEW SCORE
6.5
File Under: Channel Zero, Syfy