The first look of this Cowboy Bebop live-action adaptation had initially hyped me up, along with the classic theme song from the anime, Tank!, by Seatbelts. Then, the trailer came that had the theme playing again with some cool action set pieces featuring the troublesome trio: Spike Spiegel (John Cho), Jet Black (Mustafa Shakir) and Faye Valentine (Daniella Pineda). I was hyped! After watching the entire first season, I was in shock and agonizing pain. The amount of beatings Spike gets in the show is the representation of my pierced, throbbing heart.

The aura of the show mimics a lot of what the Cowboy Bebop anime embodies, with some changes that modernize and add layers where I thought I did not need more. This jazzy iteration of the show represents the meaning of bebop—a form of freedom of expression and escaping restraint, breaking conventions and improvisation. Right off the bat, the show does a great job establishing the relationship between Jet and Spike, two bounty hunters or “cowboys”, just trying to make enough for their next meal or ship repair—not as cool as Star Wars’ Boba Fett or The Mandalorian.

If you are watching the show while trying to make some noodles, you would not even know if the anime’s Jet was speaking, or the live-action Jet was—Shakir perfected everything there was for his character. As for Spike, Cho’s attitude and mannerisms are everything I would have wanted for a real-life Spike—smoking habits and all.

Spike’s obsession with noodles comes across really humorously, and I think the admiration of food emanates from Cho’s previous work on the Harold & Kumar movies. Overall, the chemistry between Cho and Shakir never fails to miss a beat. They joke around with each other, but you know there is a tension growing because of Spike’s mysterious past.

To add some levity to the show, Pineda’s Faye rounds out the Bebop’s bounty hunting male duo with a unique take on her character. I think this Faye makes sense as a double-edged sword for fans who grew up with the more sexualised animated Faye—many enjoyed that from the anime.

But I would argue this is where the modernization becomes a good thing, because this Faye does not typically flaunt herself around as the flirty type who uses her body to get what she wants—this was more of the anime Faye. This Faye still uses some charm to woo her way to get more Woolongs (the currency in Cowboy Bebop), but it is typically her cunning and adaptive thinking that gets her out of trouble.

“The aura of the show mimics a lot of what the Cowboy Bebop anime embodies, with some changes that modernize and add layers where I thought I did not need more.”

As for the other main characters in the series, Vicious (Alex Hassell) and Julia (Elena Satine), they get a little more screen time here compared to the anime. Hassell delivers a great Vicious—partly because he has to put up with that white-haired wig or hair plugs—and the live-action offers some differences that work well to add complexity to the character beyond the known mythos while keeping the hot-blooded, ruthless Vicious still present.

Satine’s Julia attempts to add more layers to her persona as the anime’s Julia expresses a bit of her wild side when she meets Faye. The direction the plot drives her towards was questionable, but strangely offers a side of her I would never have predicted.

The overall vibe of all the cast was great to see a deeper, intimate look into their inner psyches, as the show does with most of its main cast. As for the popular Pembroke Welsh Corgi, Ein, and hacker whiz kid, Radical Ed…well, I guess you will have to watch and see those characters to judge for yourself.

From the intro to throughout the season, I never felt like the music was not Cowboy Bebop-like—every jazzy jam strummed softly on my heartstrings. The studio brought back the original music composer of the anime, Yoko Kanno, to manage the music of this live-action adaptation. However, one of the things I thought was a missed opportunity was to incorporate the iconic outro song, The Real Folk Blues, by Seatbelts.

“The studio brought back the original music composer of the anime, Yoko Kanno, to manage the music of this live-action adaptation.”

The show boasted it wanted to nail the similarity of this new show to the original anime but could not deliver on this—every anime has its own outro with an iconic song! I really thought it could have used this sweet touch at the end of each episode, Instead, I was quickly skipping to the next episode.

What I loved during the beginning of all the episodes was showing the title screen of the “session” or episode title and number. The names of each episode definitely took me back down memory lane of the jazz-related titles from the anime—they might have somehow translated the same graphics over because the style of it was almost exactly the same.

“Pineda’s jumpy, foul-mouthed take on her character may take audiences aback, but I promise it adds a certain innocent charm to her and where her character ends up.”

The number one thing that stood out for me, was that the live-adaptation of Cowboy Bebop perfects the set designs. The more I saw inside the Bebop ship, the more I could tell they built the different parts and there was not much CGI or VFX to make the eyes dance around.

The CGI/VFX was more dedicated to the outside of the ship, and the visual effects department also achieved a great look. In fact, a behind-the-scenes moment that grabbed me was the fact that the set decorator, Anneke Botha, and her team were able to buy a real fishing trawler—the vehicle the anime’s Bebop ship was structured from—and they incorporated parts of the trawler inside the live-action Cowboy Bebop set.

By the time the credits rolled from the last episode, I was ecstatic and puzzled about how the first season had wrapped up. I thought the actors really brought their S-Rank tier acting chops with their real-life portrayals. Pineda’s jumpy, foul-mouthed take on her character may take audiences aback, but I promise it adds a certain innocent charm to her and where her character ends up.

The practically built sets grounded the series well enough for me to believe that the actors are actually interacting with objects and the surrounding environment. While all of these elements worked, I think they could have toned down some obvious Easter eggs and references to the anime a little as it felt like they wanted to slap us in the face with some of them. Altogether, this Netflix live-action adaptation of Cowboy Bebop does a great job nailing the casting and other great nostalgic elements, but falls flat with some of its translated moments and experimental story direction.

See You Next Season Space Cowboy…

This remixed, rehashed series based on the anime show, Cowboy Bebop, was able to provide some disturbing resemblance to its roots yet promises to evolve with its own distinct direction. 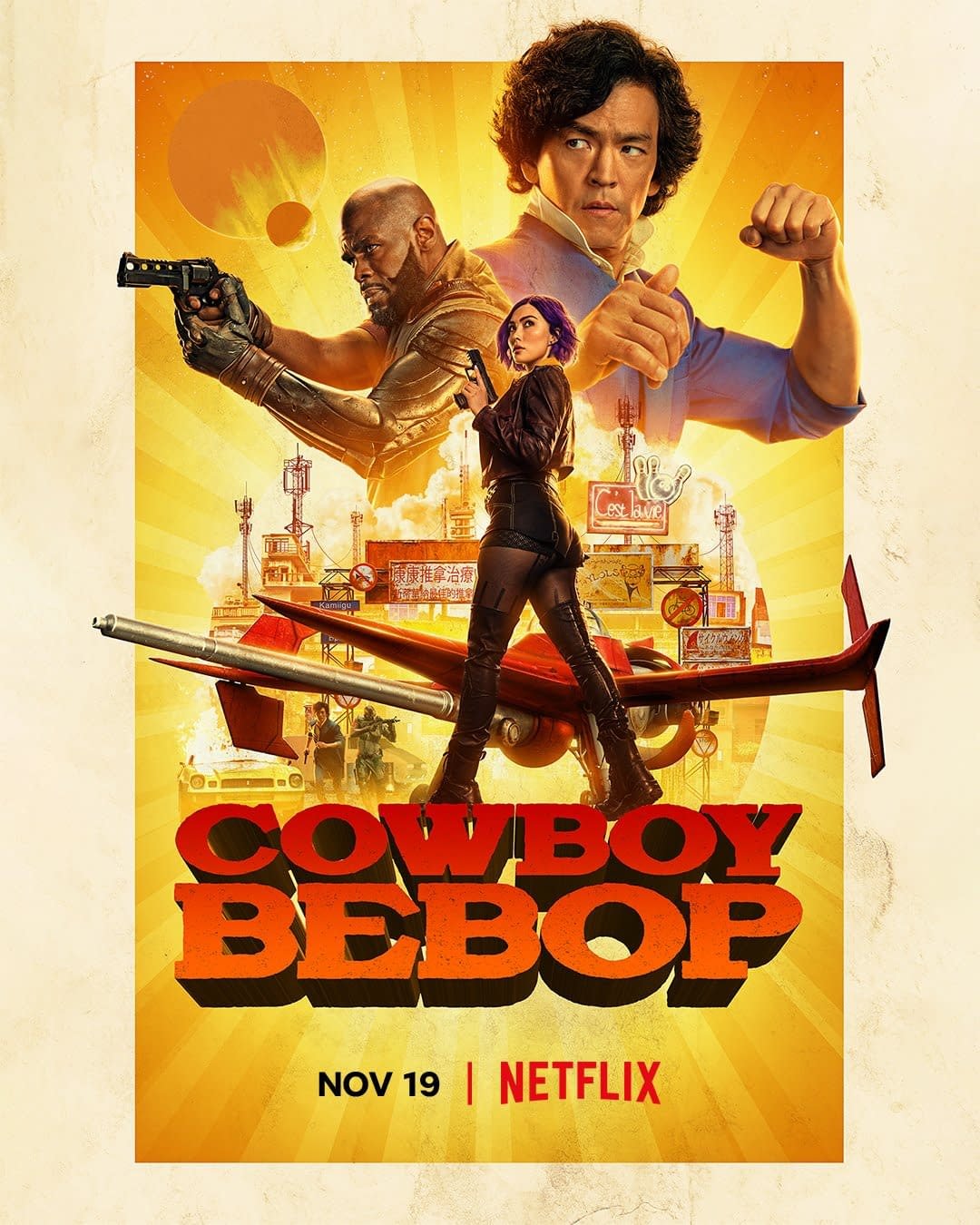