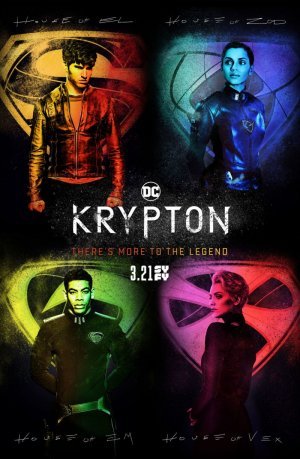 Comic book adaptations, once an instant money-maker after the floodgates were opened, are now a risky venture. With so many rules and regulations controlling who owns what property, and the risk of market saturation, it’s not as easy to just pull the trigger on a comic book show and have it make trucks of money. It’s even harder to keep track of all of the DC Universe’s mishaps, capped off by the failure of Justice League, on paper one of the biggest mashups in cinematic history, at the box office. Krypton attempts to tap into some of that same Superman mythos, but relies too heavily on previously created history to findits own unique voice.

Opening up with a rote “this isn’t a story of how we died…but how we lived,” we get an en media res retelling of the fate of the universe, and how it pertains to the family of Kal-El (Superman) on the planet Krypton. There’s a lot of Superman iconography even in the first episode, which is smart, but detracts from the mystique of Krypton itself. We get a red cape cameo in the initial five minutes, and 20 minutes in, a time-traveller (the famous Adam Strange) brings us an artefact with Superman’s “it’s not an S” logo.

Our hero, Seg-El (grandfather of Superman), is forced into a lower caste due to the treason of his grandfather, who posited that there was life outside of Krypton: a treasonous act in the fascist-ruled society. His relationship with a member of the royal guard (the daughter of the captain of the guard) is going to obviously cause problems, as is his family’s legacy despite his recent rise in the science guild. It’s an ok dramatic setup, but the plot device of time-meddling is a little much. Brainiac, eater of worlds, the main foe that’s revealed wonderfully at the tail-end, is formidable on his own without having to resort to Strange basically spoon-feeding Seg all of the details. One can’t help thinking that the show could stand on its own with a strong script, Superman paraphernalia intact, if the over-explaining time travelling arc was just thrown out.

Despite some initial skirmishes and scuffles, all of the drama and the meaningful table-setting in the inaugural episode comes at the very end. The stage is set for Seg-El to use the power of his grandfather’s own Fortress of Solitude (yes, there’s one on planet Krypton) to topple the corrupt government, which I’m sure he’ll slowly figure out how to do across the show’s initial 10 episode order. In the first episode alone he has help from a duo of deus ex machinas: a time traveller and a remote science lab, so I think he’ll do just fine.

Speaking of the superfluous, I’m a little fatigued by the algebraic equations that we need to run to find out if something is or isn’t in the expanded universe of a current property. Marvel pretty much has it down pat with their Disney-led ABC and in-house film studios on top of their easily identifiable and linked Netflix line, but DC has been a mess since Man of Steel debuted. The question of whether or not it was linked with the DCEU was up in the air for a full year before SyFy confirmed that Krypton would be its own thing: which isn’t necessarily a strike against it. We know that Doomsday and Hawkgirl are coming, among other cameos. Maybe years from now we’ll be talking about Krypton in the same way some of us feel about Gotham — a silly alternate universe take that often bends and twists existing conventions to its will in fun ways.

It’s also very hard for me to settle some of the anachronistic elements of Krypton. I get why Adam Strange, a universe hopper, is donning a baseball cap when he approaches Seg-El. But there’s a concerted effort to differentiate the class-based hierarchy of Krypton with extremes — beautiful flowing roman garb, or t-shirts and sweaters that you can find on any American high-schooler. Like many things Krypton, the costuming is a half-measure.

Yet, for all my qualms, there’s something here. The sets are better than a lot of other science fiction romps today, the various props seem on-brand, and several cast members are acting their hearts out around the otherwise safe script. Like Seg-El, Krypton has the power to become something greater, but for now, this is very much a “wait and see” TV event.

Krypton calls upon the legend of Superman and attempts to add young adult drama and Game of Thrones intrigue into the mix, to mixed effect.
REVIEW SCORE
5.5
File Under: Syfy