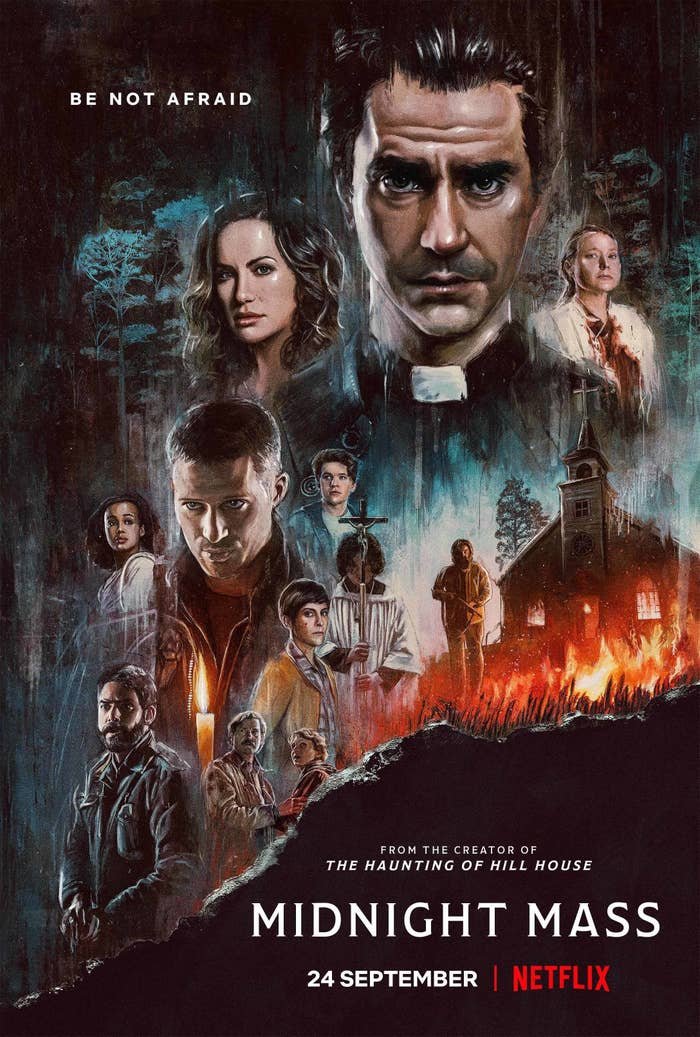 Midnight Mass is an odd beast brought to us by the incredibly talented Mike Flanagan, known for his work on the critically acclaimed The Haunting of Hill House. The series touches on the concept of faith, existence and what it means to be human. It is a blood-soaked journey into religion that delivers some fantastic concepts and great performances, but somehow falters in the final act. With inconsistent concepts and dialog that verge on the overdone, Midnight Mass ends up being a mostly enjoyable affair that just fails at being as profound as it wants to be.

Crockett Island is a fading maritime community, on a small island. The people have suffered through countless hardships and are just looking to survive. Besides the twice daily fair, the people of the town feel isolated and alone. It is this world Riley (Zach Gilford) returns to, to be with his family after a horrific accident and subsequent jail time.

After years of being away, Riley no longer fits in with the little town, but this change in his life does give him a second chance with his high school sweetheart Erin (Kate Siegel). This ferry also brings with it a young priest Paul (Hamish Linklater). He is said to be taking over for the elderly monsignor after some mysterious illness.

This all works as a great setup, having Riley act as the outsider, slowly relearning his hometown, and giving the audience a sense the hardships these 127 residents have suffered over the years. The first few episodes give very little detail about what horror lays in wait, only giving small glimpses of something evil stalking the town at night. Early on, there is little sense on where Mike Flanagan is taking Midnight Mass. A master of slow horror, Flanagen takes the time to set the stage, never giving too many secrets away before he is good and ready.

The first two episodes act as an introduction to Crockett, what the people are dealing with on a day-to-day basis, and how they seem to be struggling to recover after a commonly discussed oil spill that happened three years prior. These few episodes also work to introduce the audience to Miss Keane (Samantha Sloyan), the aggressively pious woman who has used the church to bully the townspeople to follow her wants and needs. She uses the town’s struggles to her own ends, pushing people to think the only way to push past their issues is through religion, even as things slowly start to turn ugly.

There are a lot of concepts at play in Midnight Mass. From religion, the concept of being human, and the fear of death, it is hard to imagine every idea working together flawlessly, but Flanagan manages for the most part to carry the story through all seven episodes. As the show progresses, more is uncovered, with each episode dishing just enough to keep the narrative moving forward, while never feeling like the show is spinning its wheels to pad the runtime.

“Midnight Mass brings their A-Game, delivering moving performances, even when the subject matter moves from mysterious to absurd.”

Casting was fantastic across the board. Everyone in Midnight Mass brings their A-Game, delivering moving performances, even when the subject matter moves from mysterious to absurd. From Rahul Kohli as Sheriff Haddan to Henry Thomas as Ed Flynn (yes, Elliot from E.T.), Riley’s aging father, the acting choices made were excellent. While many have been seen in other Flanagan projects, it all works here, bringing unique and often lovable characters of Crockett to life.

The biggest issues with Midnight Mass rest in the pacing and overall concept brought to the screen. There are some fantastic ideas about life, existence, mortality, and the divine, but as the episodes go on, many of the ways these ideas are explored lose impact, and veer dangerously close to the ridiculous rather than profound.

I enjoyed the notion of evil behind the happenings in the small town, but as we learn more, it seems to fail at delivering a complete picture, feeling half-baked. With some scenes feeling like padding, and the end drawn out longer than it needs to be, Midnight Mass feels like a show that had a strong four-to-five-episode concept that somehow got stretched to seven and suffers for this fact.

Even with these issues, Midnight Mass is an interesting and unique horror outing that should leave fans of genre cinema craving more. Mike Flanagan has proven once again that he can deliver exciting stories both on the big screen and in a series, and I for one am excited to see what he does next. As it stands, if you have a Netflix subscription, and enjoy horror, give Midnight Mass a watch, just don’t expect anything profound.

With Midnight Mass, The Haunting of Hill House creator Mike Flanagan brings an interesting, but flawed story to streaming that all horror fans should give a look.
REVIEW SCORE
7.5
File Under: Horror, Netflix