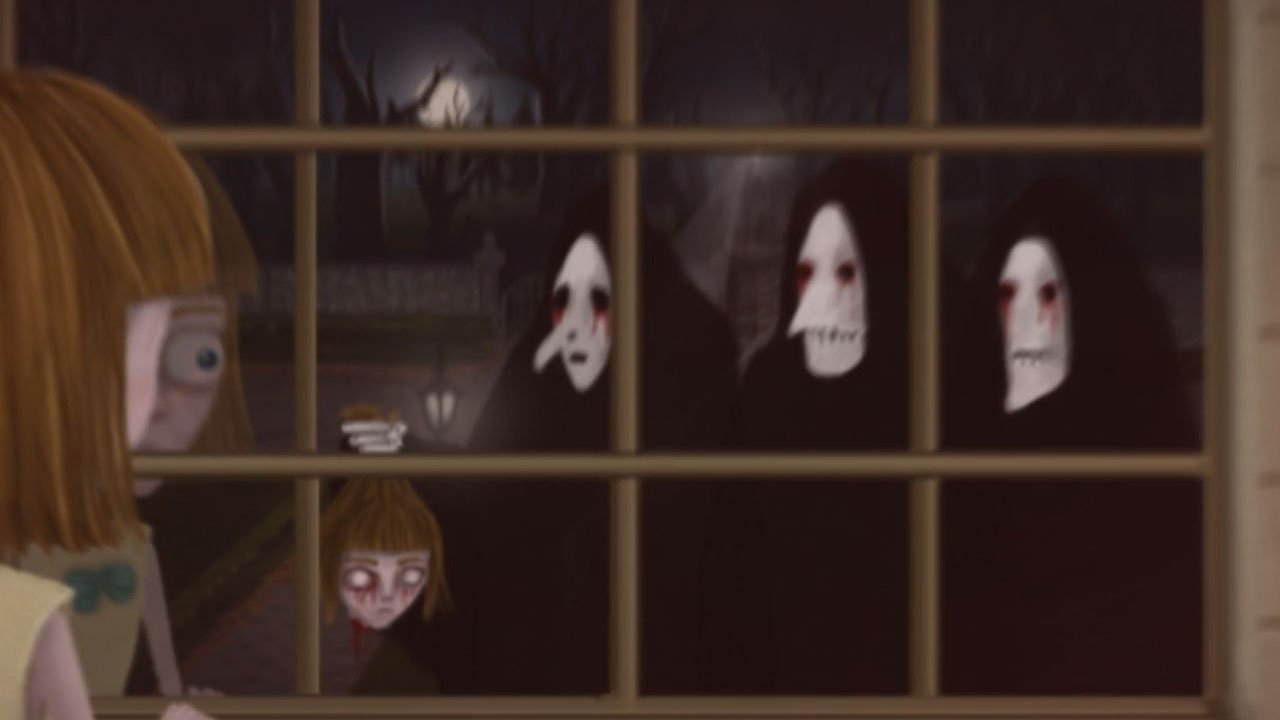 Some of the first nightmares I can remember were the result of fairy tales. As a child, my mind would fixate on the worst elements of bedtime stories. The witch fattening up Hansel and Gretel to eat them; the troll lurking beneath the bridge, waiting for the billy goats to cross over. Still, frightening as they were, I treasured these stories just as much as the millions of other kids who were terrified and enraptured by them before me. They’ve endured for centuries because they capture children’s imaginations and, when re-read as an adult, present an immensely creative blending of folk mythology and moral allegory. Killmonday Games’ Fran Bow follows in the tradition of these fairy tales.

In the opening chapter of the game, the player is introduced to its title character—the young Fran Bow—as she discovers her parents murdered in her home. Soon after, she finds herself committed to a psychiatric institute. Though the outright gore that fills its opening is decidedly modern in tone, Fran Bow quickly establishes itself as interested less in contemporary horror than the timeless nature of folk tales. The art style is a large part of this. Fran, her talking black cat Mr. Midnight, and the cast of strange creatures she encounters over the length of the game are all hand-drawn in a storybook style. That it’s been developed in the mold of classic point-and-click adventures—the kind we rarely see anymore—furthers the sense that Fran Bow is a lost story from the past.

Nowhere is the fairy tale style more evident than in its plot, though. One of the tools used to solve the game’s puzzles is Fran’s pilfered bottle of psychoactive pills. Once the player has found these, Fran can swallow one to shift the world around her to a (typically horrific) alternate reality. Similar to the Silent Hill series’ constant swapping between normal and nightmare versions of its settings, Fran Bow’s story is focused on the interplay between the real and imaginary. A forest path may contain nothing more than trees and shadows at face value, but, as Fran discovers when she takes one of her pills, the mind may colour this space in with bizarre monsters and hidden passageways.

It’s important to the game that Fran is a child—that she sees the world with the kind of naïveté we lose as we grow up. As Fran, it seems perfectly reasonable that there are hidden layers of reality just beneath the surface because this is how we cope with momentous life changes when we’re still too young to try to control our world with logic. To a child, something as traumatic as the violent death of their parents can’t be easily processed. The mind often copes by conjuring up extraordinary explanations, both pleasant and terrifying. Without explaining too much of its plot, Fran Bow understands this just as well as classic fairy tales do. Like them, its child protagonist can only rationalize the everyday world by interpreting it as a place filled with strange creatures and magical powers.

We’ve seen this approach to horror before in films like Pan’s Labyrinth and older videogames like American McGee’s Alice, but it’s still a surprisingly rare path for the genre to take. Perhaps because modern audiences are more accustomed to the grittier aesthetic of found footage ghosts, flesh-eating zombies, and deranged serial killers, the fantasy elements that fill fairy tales may come off as childish. This is unavoidable for a style of storytelling so indebted to the mythologies that filled our youth, and it’s a real shame. Fran Bow, just like the film and game mentioned above, shows that fairy tales are rich in potential for clever horror developers. When a creator works within a genre of such limitless boundaries, they’re given license to express difficult emotions through any form they can dream up. As in Fran Bow, trees can talk; pinecones are found to live out secret lives—and the fear that accompanies the loss of parents can turn into a shadowy world filled with unthinkable monsters with evil intentions.