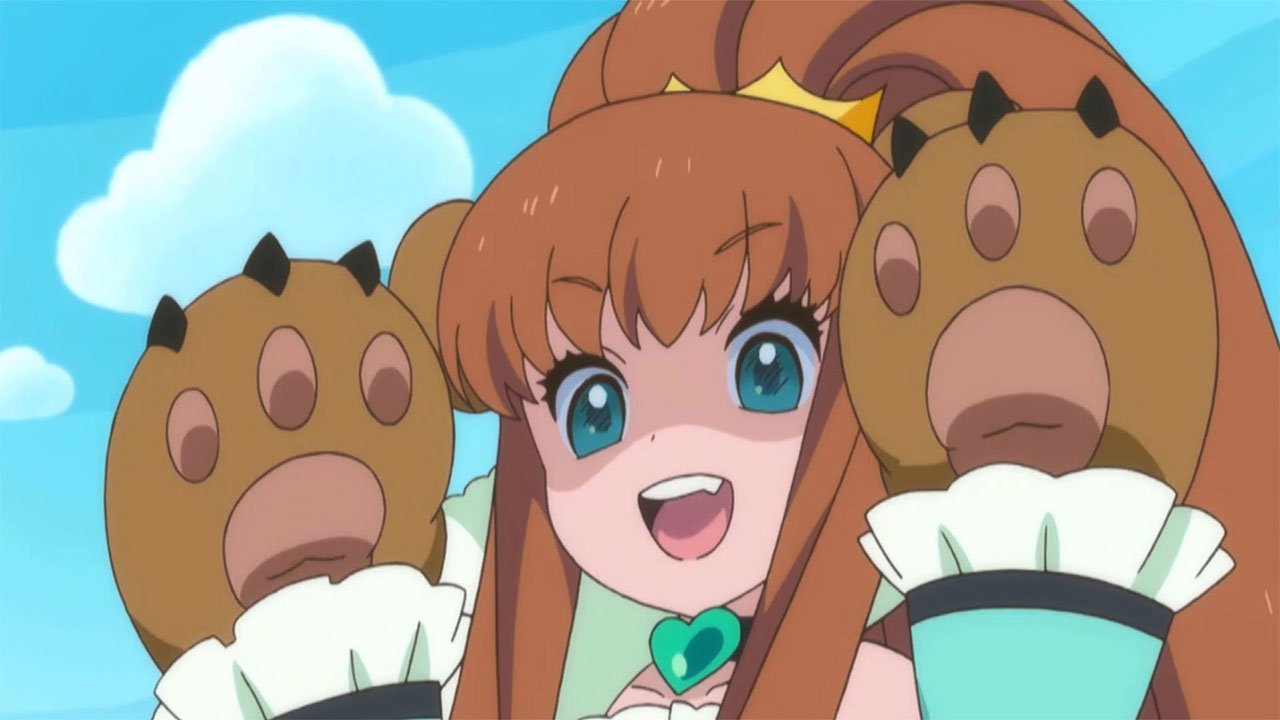 In Japan, Christmas is sort of different. A lot of people still go to work, gift-giving isn’t as much of an ordeal, and one of the biggest customs is chowing down on Kentucky Fried Chicken. No, really—people preorder buckets in advance for fear of not being able to get it. But because we don’t live in Japan, us Westerners have to punch other shoppers for the right present and don’t even get to look forward to the greasy goodness of KFC on Baby Jesus’ birthday. The upside is that buying anime in the West is way cheaper than it is overseas. With that in mind, here are ten anime worth buying for the discerning otaku in your life. For the sake of this list, I’ve excluded sequels (so Evangelion 3.33 is off the table, despite being wonderful,) and only listed things that you can legally buy physical copies of in the West.

Diskotek, one of the best publishers in the industry right now, rescued one of the 1980’s forgotten gems this year. Wicked City is a nasty, twisted little beast of a movie, packed with sex, violence, and weird combinations of the two. Yet it’s not all exploitation—Kawajiri’s compelling yarn of an attempted demon/human peace contract is a tight thrill ride of a film. Featuring some truly memorable set-pieces and an emphasis on unnerving body horror, this is one for your weird cousin who doesn’t leave their room all that much. Plus, Diskotek’s new transfer is crisp and clean, making it the best version of the flick on the market right now.

Anime romance is usually pretty shallow and poorly depicted, mainly because it’s rooted in immature understandings of human interaction. That said, there are some diamonds hidden in the dirt, and Monthly Girls’ Nozaki-Kun’s definitely one of them. It’s a cute, sweet tale about a high school girl who falls for a manga artist, and the wacky hijinks that follow. Nothing about it is too serious or heavy—it’s a pretty frothy, light little show from start to finish. Yet in a world where grimdark melodrama like Attack on Titan and Psycho-Pass pass for being “good,” there’s definitely a place for this sort of thing. It’s a funny, sweet show that almost anyone can enjoy, and good for giving warm fuzzies underneath the mistletoe. Plus, the comedy lovers out there will enjoy the funny visual gags in each episode.

You know what I hate? “Let’s make a club” anime. Know what Charlotte’s about? Making a club. Wait, wait, hear me out! See, what makes the prolific Jun Maeda’s latest worthwhile is its staunch refusal to fit into a box. While the central premise is that the protagonists are gathering adolescents with superpowers, that concept is a simple framework for a more complex narrative to build upon. As the series progresses, insufferable moe tropes fall to the wayside in favor of thought-provoking fantasy and sci-fi. It actively builds audience goodwill before smashing it against the rocks, recalling Hideaki Anno or Tsutomu Mizushma at their meanest. It’s a roller coaster of a show, and while some parts of it are a little bog-standard, it ultimately ends up being more than the sum of its parts. Whether you have a sci-fi fan or a pretentious anime hipster like me in your life, Charlotte’s a safe bet.

Few words can describe how on the fence I was about Parasyte -the maxim-. It was a modern riff on a classic manga, one that changed the art style of the show and cast Aya Hirano aka Haruhi Suzumiya as the murderous alien attached to the protagonist’s hand. Thankfully, I was wrong, and Parasyte is a stellar adaptation that even manages to find ways to improve upon the source material. It’s a blood-soaked action tale that’s punctuated by bits of dark humour and messed-up body horror, making it a perfect fit for that edgy teenager in your life. In terms of grim, punch action anime, you could do a whole lot worse than Parasyte -the maxim-.

Another cute and sweet anime about teenagers falling in love, MY love STORY!!! wound up taking me by surprise. It’s one of the rare romance anime where the protagonists aren’t complete idiots and don’t even get together in the end. Instead, it’s a story where the adorably bashful protagonists get together in the first few episodes; the rest of the series is dedicated to them clumsily navigating the ins and outs of a relationship, albeit in a very comedic sort of way. The stellar art direction, great animation and spot-on voice acting make My love STORY!!! one of the most infectious, sweet titles of the year, and one of the better romance anime I’ve seen.

Here’s one for when your family leaves after the festivities are over. Prison School, which concerns a group of high school boys locked up in a prison camp for being perverts, is one of the most gleefully distasteful shows out there. It revels in its absurd premise, and takes full advantage of the TV-MA rating in the most explicit ways possible. But if you look past the fan service, it’s really a stellar anime and one of the best in years, in fact. It’s a ribald send up of masculine insecurity, one that’s rife with dirty humour and filthy punches at male sexuality. In spite of its over-the-top content (or perhaps because of it,) Prison School is one of the best adult comedies in recent memory, and definitely one for less prudish people in your life.

Kyoto Animation’s mostly cranked out garbage in recent years, so imagine my surprise when they made something that was, in fact, not garbage. Sound! Euphonium is a surprisingly slow, nuanced human drama about a high school band trying to compete at a national level. However, it’s more than that; it’s a story about budding romance, tested friendships, and teenage insecurities, all rolled up into a slickly produced and brilliantly scored package. KyoAni came back in a big way with this show, and gave me faith that they’ve still got good work in ‘em. Plus, for the LGBTQ teens in your life, Euphonium does a great job of depicting same-sex romance in a positive, sweet light that doesn’t overtly sexualize its characters.

Isao Takahata is Hayao Miyazaki’s second fiddle when it comes to Studio Ghibli productions. His tone, style, and themes are wildly different from his friend/rival, and by consequence, his films usually aren’t talked about as much. Which is a shame, because his works are some of the studio’s most interesting. Only Yesterday is, in fact, one of their best. It’s a touching tale of a woman’s dissatisfaction with her life, and her attempts to reconnect with her childhood dreams. This tale of an office worker turned farmer is a sweet, touching drama that moves at a leisurely pace, and ultimately reminds viewers to never lose touch with what truly makes them happy. Ghibli’s beautiful animation helps bring Japan’s lush countryside to life, along with a stellar cast and moving score. Only Yesterday is a beautiful movie that practically anyone can enjoy, and another reason to appreciate Takahata’s mastery of the craft.

2) The Melancholy of Haruhi Suzumiya

The anime industry spent the last decade ripping off Haruhi Suzumiya, and it doesn’t show any signs of slowing down yet. However, copies will always be inferior to the original, and thus is the case with Kyoto Animation’s undisputed masterpiece. The funny, touching tale of a fickle goddess and the boy who loves her is just as entertaining today as it was in 2006, and Funimation’s mac-daddy release is as good as we’re ever going to get. Both seasons of the show are revolutionary, compelling yarns that pushed the medium to new heights and laid down a mould for other shows to lazily follow for the next ten years. It’s still one of the best shows out there, and this release is a must-have for fans or newcomers alike. Now if only the fantastic follow-up film would get a reissue.

If Haruhi set the mould, Yurukuma Arahi is a bold attempt to smash it to pieces. Ikuhara’s latest attempt to blow minds is a flagrant celebration of queer sexuality, a critique of the limitations of yuri anime, and a bold criticism of Japan’s reductive views towards gay marriage. It’s also just a flatout great show, with endearing characters, a tripped-out premise (lesbian teddy bears!) and some of the best art design in recent memory. As somebody who routinely loses faith in the anime industry, Yurikuma Arashi was this year’s reminder that people are still capable of making some great stuff. While some of the nudity in the show makes it a little inappropriate for younger audiences, it’s still a subversive trip of a show, and the best thing the medium’s produced in years. A must-have.

That about does it, folks! Hopefully, this list helps you figure out something worth getting for the anime fan in your life, regardless of their age. Be sure to check out CGM’s other Buyer’s Guides for comics, games, and movies!