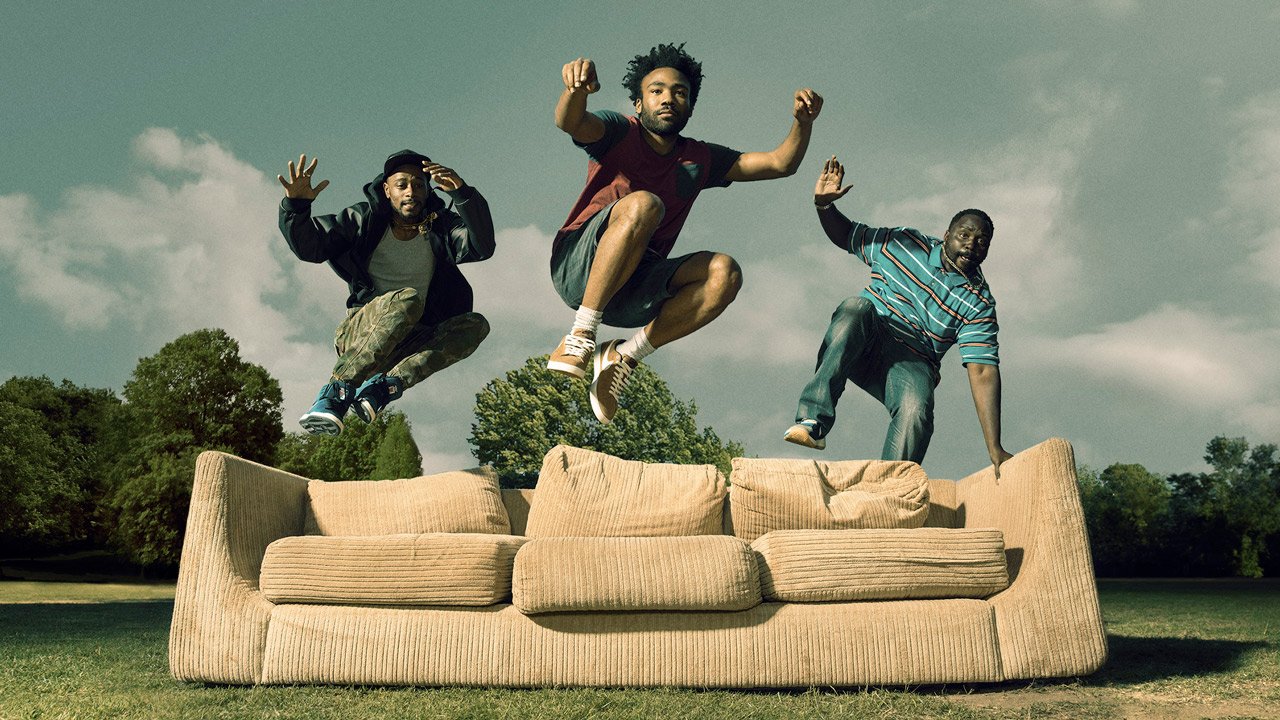 In the year 2016, the gods of Content sought fit to bless the planet with a torrent of media, in the hopes of distracting us from the relentless deluge of misery that was 2016. There were more TV shows than we knew what to do with, as prestige television came at the viewing public from literally every angle. Of course, some of those shows didn’t quite stick the landing, but it’s the holiday season; everyone knows it’s the thought that counts! For every Westworld, there was a Vice Principals, and for every Search Party, there was an Angie Tribeca.

I did not watch everything this year (and will address that in a later article), but these are my 10 favourite TV shows that I watched to (some form of) completion in 2016. Keep in mind these are numbers 10 to five, four to one comes tomorrow.

Boy, I can’t wait for The Grinder to appear on everyone’s “TV shows that shouldn’t have been cancelled” lists in a few years, once people actually start watching it. For me, it was destined to be on my radar, since it ticks a major personal preference box—television about television. That it also manages to have a tremendously strong comedy ensemble, anchored by Rob Lowe as a delusional actor and Fred Savage as his put-upon lawyer brother, feels like a bonus.

Although it may have started as your average odd couple comedy, The Grinder quickly found its niche by tying much of the show’s conflict to the titular show-within-a-show and stringing episodes together with several recurring arcs, culminating in a series finale that feels all the more emotionally satisfying for all the time viewers have already invested in the show. Timothy Olyphant is a recurring character, playing an exaggerated version of himself, and he’s fantastic. For as much as The Grinder is about family, it’s also about how network TV is kinda terrible but also the most important thing in the world.

In hindsight, there’s no way The Grinder would’ve lasted beyond a season. It requires a level of active watching nobody expects from your average basic cable viewer— the sort of assumption that made CBS “America’s Most-Watched Network,” after all. Nobody ever lost money betting on the stupidity of the general public, et al. If I sound bitter about this, good. I’m getting ahead of the curve.

I’ve stopped trying to evaluate James Franco as an “artist” and have instead been looking at his work on a case-by-case basis. This has been a winning strategy, as it helps me avoid films like Why Him? or True Story (which I only sort of avoided, now that I think about it) and instead focus on gems like the TV show 11.22.63. There was a lot working against 11.22.63— it’s a Hulu original series, which has rarely been a barometer of quality before this year; it’s a show featuring modern-day James Franco; it’s a story about the conspiracy behind the JFK assassination; it’s a miniseries based on a Stephen King book— but, curiously, the whole managed to escape the respective curses associated with its parts.

11.22.63 is a harbinger of quality for Hulu (spoilers: Hulu shows are re going to appear on this list again), delivering a thrilling spy adventure that actually managed to convince me of the truth behind JFK’s killing. Franco manages to blend a sort of wide-eyed innocence with the perfect level of intensity—his Jake Epping is blown away by the enormity of his mission at first, but as the stakes crystalize and the tension ratchets up, his performance shifts in a way that feels almost innate. He doesn’t freak out to the point where his character loses momentum, even doing things most of us would find hard to swallow.

King’s tremendous prose is represented well; in the rich cinematography, in the layered performances, and in the clever opening sequence. All of the cast members embody their roles perfectly, including Daniel Webber as a surprisingly rich Lee Harvey Oswald. It’s a moody show without being melancholy and it’s absolutely worth a look for that alone— even if the phrase “Hulu Original Miniseries” makes you balk.

You would like 11.22.63 if: you like Stephen King’s good stuff, if you like character-driven sci-fi, if you’re down for a story with a definitive ending, if you like the Russell T. Davies era of Doctor Who.

Best Episode: The Day in Question

TBS— the artist formerly known as the place where my family would get their Everybody Loves Raymond fix— really went for the gold this year, with their Broad City riff Search Party taking off with some critics and their own timely late-night talk show, Full Frontal with Samantha Bee, being hailed as The Daily Show’s true successor, even more so than the show that continues to bear that name. Their curious approach to binge-watching reads like a company desperately trying to figure out how to survive once streaming cuts the cord once and for all. In that respect, TBS is well ahead of the curve, publishing internet-friendly TV shows, and making them easily available to us fickle millennials.

I say “fickle” because I didn’t see a single person talking about Angie Tribeca on Twitter this year, which honestly surprised me. You don’t see many TV shows these days attempting to follow in Police Squad!’s gold-plated footsteps, constantly spoofing the ubiquitous police procedural while delivering solid absurdist humour practically every 10 seconds. Not every joke is a gut-buster, but the Goof Frequency (GF) is so high that you’re almost guaranteed to laugh at something. Every member of the cast delivers a killer performance, especially Rashida Jones as the eponymous hardass. Jones’ work on shows like The Office and Parks and Recreation showcased her gift for comic timing and her killer deadpan, but it’s great to see her as part of the joke, rather than just being the straight man.

You would like Angie Tribeca if: you have ever watched a single episode of a modern-day police procedural, if you like jokes, if you miss Police Squad!.

Vice Principals is the best TV show on HBO as of press time. It’s better than Westworld, it’s better than Game of Thrones, and it’s certainly better than Vinyl. It’s nine episodes of pitch-black comedic bliss in the vein of the similarly fantastic Eastbound and Down, starring the criminally funny Danny McBride as Neil Gamby and Walton Goggins as Lee Russell, two co-vice principals seeking to usurp Principal Belinda Brown, the outsider who came in and stole the jobs they believed were rightfully theirs.

Yes, the show has the darkly comic sentiment that fans of Eastbound and Down have come to expect, but with the added bonus of a curiously incisive look at white male privilege. Gamby and Russell are horrible people who would absolutely ruin North Jackson High if given the chance. What little we see of Brown tells the audience that she makes a far superior principal—to the point where Gamby and Russell could very well be considered villain protagonists.

Maybe the show falls apart when binged as a whole, but week-to-week, watching the titular Vice Principals drag themselves towards character development made for appointment television. In Vice Principals, a character getting in touch with his feelings is represented by a brass knuckles-powered shot across the jaw— as clear a mission statement as I’ve ever heard. Take the show for what it is— as a ridiculously funny examination of “men” without letting the men in question off the hook— meet it on its own level, and you’ll really enjoy Vice Principals.

That’s too much, man!

You would like BoJack Horseman if: you like shows that make you feel a wide range of emotions; predominantly sadness, if you want to watch a show that is much much much better than it looks, if you can get over the art style.

You could think Atlanta is a TV show about up-and-coming rappers in the titular southern city, and you would only be half-right. Yes, that’s is ostensibly the plot of Atlanta, but rarely has a TV show been so dominated by tone and atmosphere. Series creator Donald Glover has described the show as “Twin Peaks for rappers,” and rarely have I seen a self-assessment this succinct and accurate. It’s a weird show, but it never loses sight of its characters in all the Scooby Doo-esque fake walls or slavery-themed Juneteenth cocktails.

Donald Glover is a ridiculously talented writer/rapper/comedian/actor. We know this from his extensive body of work, but Atlanta solidifies it, acting as a sort of talent manifesto. The world Glover has created is rich and full-bodied, instantly recognizable but just “off” enough to be actively intriguing. The show’s needle drops are expertly timed, and the Justin Bieber parody is note-perfect. I think “the racism book” might be my favourite punchline of 2016. And Glover as Earn is a deeply sympathetic character, even as he acts like a child, driven by a need to prove himself to a family that has long since written him off.

Atlanta also boasts one of the best ensemble casts in modern television. Brian Tyree Henry as Earn’s cousin Alfred Miles, AKA “Paper Boi” is my personal favourite, with a world-weariness you would expect from a man who has somewhat resigned himself to his station in life— with the added bonus of a preternatural gift for comedic timing. I suspect Keith Stanfield as Darius will be a long-term favourite, but Zazie Beetz as Van is Atlanta’s secret weapon. A lesser show would have Earn’s girlfriend be a killjoy, a character who exists just to give the freewheeling men a foil to play off. Van certainly doesn’t approve of Earn’s new career move, but she’s got a daughter to feed and every reason to keep food on the table. Often, Van exists in opposition to Earn, but in a recognizable way— Van is a trope evolved, doing her best to balance Maslow’s Hierarchy of Needs against her affection for Earn. She’s arguably the protagonist of a parallel show, and I hope Beetz has a long, successful career ahead of her.

You would like Atlanta if: you’re an Outkast person, if you like Donald Glover, if you want to be the coolest person at the dinner table whenever you visit family.