Star Wars Battlefront Will be a Disaster 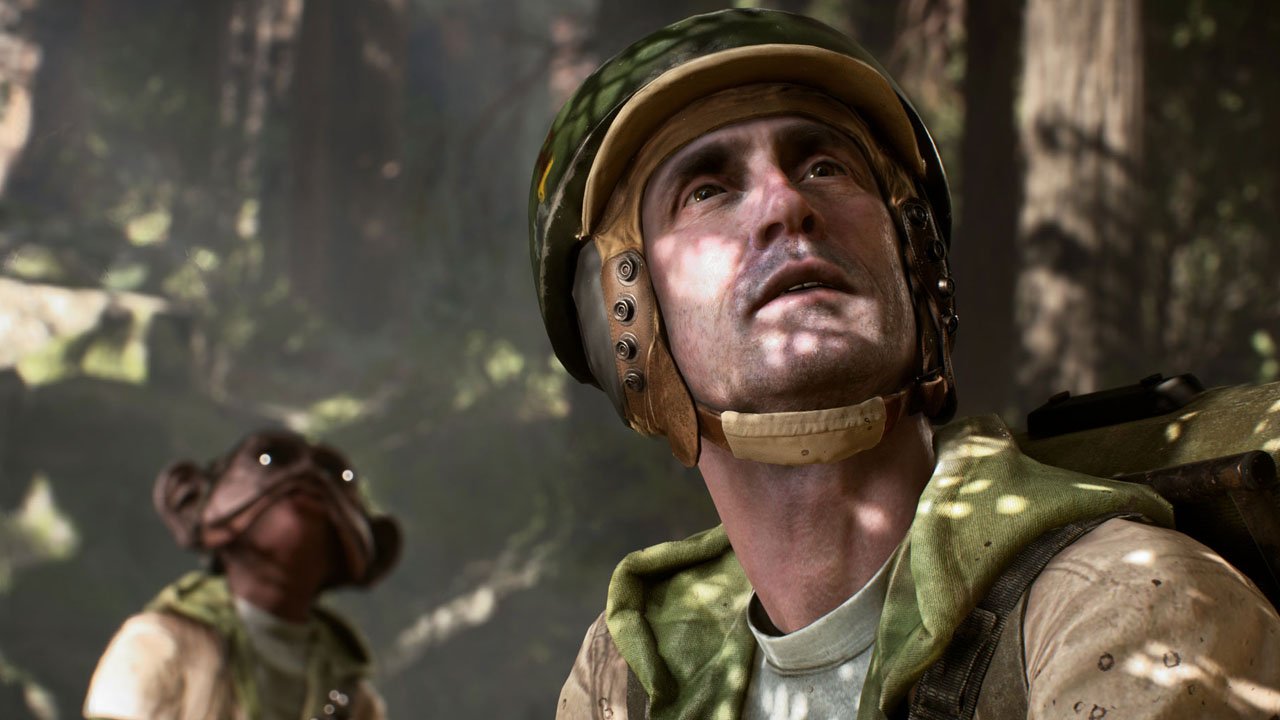 Star Wars Battlefront II was an iconic game in the genre.Expanding on the premise of the first title, it took the notion of Battlefield, dropped it into the Star Wars universe, and allowed you to fight planetside, as well as in space. For many, it was the definitive Star Wars game, and on paper at least, the upcoming sequel should have been everything that players could have hoped for.

Developed by DICE and published by EA, there’s no denying that the upcoming sequel, simply titled Star Wars Battlefront, certainly looks beautiful. No doubt, it will become one of the highest-selling titles of 2015; and that’s a bit of a problem. The truth of the matter is that Battlefront, rather than being a true successor to the originals, is little more than a re-skinned version of Battlefield. Sure, that sounds great, right? I mean, Battlefield 4 was, without a doubt, the most beautiful and expansive offering in the franchise. What’s so wrong with having that translated to Star Wars? Quite a lot, actually.

Let’s give DICE and EA the benefit of the doubt, here. Let’s assume that they’ve learned well enough from the disastrous mess that was the first year of Battlefield 4 and launch a seamless, stable, and mostly bug-free Battlefront. That still leaves us with three major flaws in Battlefront. Those three flaws include a lack of scope, a lack of proper server browser, and a lack of proper netcode. Taking a step back, these problems aren’t just present in Battlefront, or even just Battlefield, for that matter. In fact, they run through the heart of nearly every major videogame franchise sequel in the last half-decade. And we haven’t even discovered the game-breaking bugs and balance issues that we’ve all come to know and love from every Battlefield game since 2.

For many fans of the original, myself included, the first “nope” moment for Battlefront was the announcement that the new title would not feature space battles. Take a second to let that sink in. The latest sequel to the franchise that defined itself by allowing you to transition from ground battles to orbital combat is removing half of that equation. DICE claimed it was in the interest of keeping player focussed in a tighter combat arena, saying, “We want players to stay in the same [environment]—we don’t want players to fly off and do something over ‘here.’ It’s about the Battlefront experience, so we want to keep you in-atmosphere and fighting with the infantry.” But any well-designed maps—or game modes, for that matter—provide grand scope while ensuring that players are still assisting their team. Obviously it worked in the last title, and it also served as the core premise for Battlefield 2142’s Titan Mode. Call it what you want, DICE, but your loyal fans know you’re lying to their faces. Why can’t you just come clean and admit that you can’t be bothered? Battlefront will sell quicker than any previous Star Wars title; you don’t need to placate the fans. Re-skin Battlefield and you’re good to go.

Or worse, save space transitions for one of the four DLCs planned for the next 6-10 months. Don’t pretend like they’re not happening, it’s become a DICE hallmark to sit on content so it can be sold to players who are looking to complete their experience.

DICE almost got the picture when it came to multiplayer here. Almost. Sure, they know well enough not to make the disastrous Activision mistake of using local-host servers, but dedicated servers are only a fraction of the bigger picture. Last week, EA told PCGamesN, “Our servers will use a skill based matchmaking system to pair players together.” For those who haven’t been hearing this same thing for the last decade, it’s what we consumers call “marketing rhetoric.” In other words, EA and DICE can’t be bothered to care about their communities. Not when it’s more profitable to ensure that Joe/Jane Blow (no offense, Joe and Jane, I’m sure you’re nice people) can pick up the game and drop into a match without hassle.

The real problem here is that this penalizes groups of friends (or worse, entire communities) that wish to play together. Matchmaking lobbies rarely allow more than four or five players to queue up together, and when you have a group of 8-10 core friends who are looking to play, or are trying to orchestrate a 30-50 player community night (or heavens forbid, a LAN party), you’re stuffed. Have fun trying to get the matchmaker to drop all ten of your parties into the same server. Spoiler alert: it never does. All of this is of little consequence to the person who picks the game up to play alone or with a friend or two every once in a while, but for the true fans that allowed the franchise to persist as long as it has (right up until EA shut down the servers last year to ensure they had no choice but to buy-in to the new title), it all feels like a kick in the pants. And as it should, because let’s be frank, that’s exactly what it is. Which segues nicely into my final point…

For many players, they will never even notice this. For true shooter fans, though, this has been the bane of our existence ever since online shooters became prevalent on consoles. Netcode is the term used for all the bits of programming related to how your game talks to the server, and through that, to everyone else’s game who’s playing with you. The traditional (read:correct) method of handling something like a check to see if Player A has shot Player B in the face goes a little something like this.

1. Player A fires a shot right into the big stupid face of player B.
2. That information is sent to the game server.
3. The server looks for the information relating to the shot and matches it up with the information about where player B was at the time.
4. Assuming a low and equal ping of say, 50ms (the time it takes for your computer to talk to the server and get a response), and assuming Player A was on-target with his shot, the server awards Player A the kill, and Player B will probably be subjected to watching his corpse being teabagged on the kill-cam.

Problems arise when connectivity to the server isn’t so hot—like in the case of mass, centralized servers, rather than private, dedicated servers that you can join somewhere near your city. If Player A has a 200ms ping (1/5 of a second), and Player B has a 20ms ping (1/50 of a second), Player A is not sending or receiving data nearly as fluidly as Player B. This means that Player A will be shooting at an image of Player B that is not “up-to-date”, and Player B will see an image of Player A “warping” around the level. This was a major issue on early Xbox Live, when players were connected to servers hundreds, if not thousands of miles away, and using shoddy internet to do so. To smooth this out, many game developers started using “network smoothing” and client-side hit detection (read:incorrect method). An example would look something like this.

1. Player A fires a shot at what his computer thinks is Player B, on account of having out-of-date packet information (because he’s lagging). The Network Smoothing has told his computer that based on Player B’s movements, it’s predicted that Player B will be in X location. Based on this information, Player A takes his shot.
2. Player B is, in fact, already out of line-of-sight, having seen Player A and ducked for cover before Player A could fire (because his lower ping allows his computer to get updates more frequently, allowing him to respond quicker).
3. Player B continues about his day.
4. Player A’s packet about his shot information finally reaches the server, telling the server that Player B’s head was in the centre of Player A’s crosshair when he fired, thus scoring a kill.
5. The server takes Player A’s computer’s word for it, and awards him the kill.
6. Player B, who is already around the corner dies and is subjected to a kill-cam of a shot that pierced an impenetrable wall to kill him, while he listens to Player A scream over the mic about how he needs to “get gud, son”.

Aside from the obvious grief of being shot through walls, or hard cover or what have you, this method is incredibly vulnerable to both intentional exploit (forced latency exploits), region-swappin (griefing on far away servers), and hacking (because the server trusts the client-side information, rather than checking for itself). And don’t forget, there’s no dedicated servers, ergo, no admins, ergo, no one to ban the hackers if the automated systems don’t catch them. The real problem, though, is that these terrible coding habits have been an issue on PC for years (because PC and console versions are co-developed), even though modern console server clusters and readily available high-speed internet renders them obsolete and irrelevant. All they do is hurt end-user experience, but it’s too easy to just stick with what you know, rather than invest the effort to fix the problem. Especially when we’re talking about Star Wars and you’re going to sell a million copies, regardless.

Content-cutting, lack of proper servers and server browsers, and appalling netcode are all things that have plagued DICE and EA’s titles for a decade now. They’ve become the bane of the consumer, and they’re responsible for so many of us Battlefield and Battlefront faithful finally giving up and moving on. Star Wars Battlefront will undoubtedly be a beautiful and immersive experience, unparalleled in its visuals and sound design, as all DICE games are, but without proper interest from the developers, it’s not the game that we deserve. Sorry, DICE, you guys have made some of my favourite games to be immersed in, which are also some of my least favourite to play. I’m out.