Nier: Automata: An Interview with Yosuke Saito and Junichi Ehara

I make no effort to hide the fact that I think NieR was one of the most critically under-appreciated games out there. When it was released in 2010, it was met with a lukewarm reception, having received an aggregate rating of 68%. And I get it. As a game reviewer, the reality is, you have deadlines to meet and embargos to make. Having the ability to sink 25+ hours into a game you have have to finish in less than 22 is a challenging feat at best. Which is an unfortunate situation for a game like NieR; a game whose story is heavily dependant on playing until completion, 60+ hours later. For us fans, a score like that usually means a nail in the coffin for what could be a fantastic franchise. So when NieR: Automata was announced at E3 2015 (going by the working title of NieR New Project), it was a huge surprise.

Yet, at the same time, it wasn’t. You can’t develop a game of that magnitude without a team that is passionate about the world, the story and the characters they’re created. Which, despite the fact that, as Producer Yosuke Saito puts it, NeiR was “not considered a great success”, was reason enough to shake off the negative feedback and give the world another chance through NeiR: Automata. I had a chance to play through a preview level with Co-Producers Yosuke Saito  and Junichi Ehara, and have a chat about this new title and how things would be different this time around.

Yosuke-San and Junichi-San started our conversation off by immediately addressing the feedback they received and how it influenced the development of NeiR: Automata.

“In the previous title we did receive high praises for storyline, the music and the character. Especially for the previous title, you could experience the game in full with a multi-ending if you play multiple times. We did receive a lot of feedback saying that it was a really touching game. They [players] could really cry, when playing the game. However, we did also receive feedback saying that the action part of the game wasn’t as great, and so we did think that it is somewhere that we need to improve on. We did receive high praises for the storyline, but for those that really did not play through the entire game until the fourth ending did not really think highly about the game. That is how we ended up with the Metacritic score that we do have today.”

It was the feedback that prompted the team to join forces with PlatinumGames, a development team with a reputation for engaging action games such as Bayonetta, and Metal Gear Rising: Revengeance. Platinum took the lead in developing NieR: Automata’s gameplay to create a battle system that was quick to pick up and keeps you on your toes. They combine sequences of action RPG and bullet-hell with a variety of weapons and skills to fit a multitude of gameplay styles.

Junichi-San handed me a controller and I watched as NieR: Automata opened to a desolate, post-apocalyptic urban world, reminiscent of the first game. Platinum’s reputation for creating beautiful environments is well earned, and Automata is no exception.

Yosuke-san proudly explains, “They have created beautiful environments for us, which are connected in an open world game. We were able to create a game that moves at 60fps even during all of the action sequences.”

With the sequence at an end, I dove in, head first, ready to battle a series of androids who were very much in favour of destroying me. As seen in many trailers for NieR: Automata, you take control of humanoid android YoRHa No. 2 Model B, or “2B” for short. Even at such an early development stage, the mechanics felt quick and fluid with a devastating variety of combos to use to eliminate all who stand in your way. According to Junichi-San, combos are tied to the variety of weapons you collect throughout the game. These combos vary depending on the types of weapons you have equipped, and can be coupled with defending maneuvers. Aside from a devastating array of weapons, 2B is accompanied by a flying companion robot who attacks along side you, with skills that can be tailored and upgraded as you progress. As in the first game, depending on the areas you enter, the camera pulls back to give players a full view of the beautifully rendered landscapes.  As enemy encounters intensified, so did the music, layering operatic vocals in a polyphonic experience as powerful as that of the first NieR.

The story for NieR: Automata takes place more than a few thousand years in the future of the first game. All life on Earth was forced to flee to the Moon after an Alien invasion attacked with an insurmountable army of machine life forms. 2B and other YoHRa were created to counteract the invasion and take back the planet.

There is no need, however, to play the first NieR to get the full effect of, Yosuke-San assures me. He explains what influenced this decision: “I do not consider the previous title to be a huge success, but at the same time, there are a lot of people who really loved that title. Because it was a title that was loved by some many people, I wanted to expand that to more people, more players. If we made this new title a direct sequel you have to play the previous title, then that opportunity just gets tiny; it just doesn’t reach as many people as we want it to reach out to.  That’s why we decided to  make the main story of the game, something that you don’t have to play the previous title to enjoy.”

According to Yosuke-san and Junichi-san, feedback was a big factor influencing many decisions in the games development.

“Was it difficult to see some of the user feedback you received after NieR’s initial release?” I asked.

“So, It wasn’t too difficult to accept, just because I already braced myself for it,” Yosuke-san explained. “What I felt bad about was that there are so many people who wanted to really see the end of the story; they wanted a real experience the entirety of the game, but they couldn’t, because the action sequence was too difficult to clear. They couldn’t move forward and move on past a certain stage. So, when I was creating this game [NieR: Automata], I had in mind, that this could never happen again, so I made sure that people would be able to clear the game.”

“In prior interviews, you mention that, theoretically, players can clear it in 25 hours. Was that an influencing factor on as well?” I asked.

“Yeah, most definitely, that is the one of the reasons why we made it so that you’ll be able to clear it in 25 hours. But the difficulty level to reach that complete ending is not as difficult, because  of that as well. We do have multiple endings in [NieR: Automata], but what you need to do in order to reach that complete ending, will not be as difficult as the previous game.” Yousuke-san explains.

Junichi-san also mentioned while I played, that player would have the option to choose a difficulty level at the start, which would set different stats and parameters of enemies, so as to not alienate players looking for more of a challenge.

This may sound like the team is catering only to review scores, but after playing through the preview, I can honestly say that if they can keep up the trajectory I was shown, nothing can be further from the truth. There was enough of a return to the things the made NieR so special in the first place, that it feels like the team behind it felt so deeply about the material that they took NieR: Automata as an excuse to improve every aspect of the game. A lot of time was spent developing the story itself and the interaction between the main characters, with efforts concentrated on rich themes, in tune with the style of the first game.

“The characters that appear in this game are androids – they’re mechanical life forms.” Yosuke-san describes. “At first glance, when you hear that, you would imagine characters or beings with no emotion.  But…there’s going to be a lot of interaction between the characters, like 2B and  9S….that they do have some kind of dialogue between them. We see that there’s some kind of emotion, and so, the image that you have of androids and mechanical life forms may change as you play the game. You would notice that they do have some kind of emotion.”

“So, I can’t really dive into to much about it, because that would reveal the story line,or be a kind of spoiler.” He continues, “But while there is that theme of agaku, I also think that there’s also a theme of love on in this game, which you would normally not associate with robots. You will see that there is a certain type of love between the androids and other robots themselves as well.”

Fans of NieR will also get to see a few familiar faces with Devola and Popola, who, as Yosuke-san hints, “will appear in this game as well, in some format. There will be that kind of a connection, that you might be able to look for-  like an easter egg in the game.” He goes on to say that NieR: Automata will be an opportunity for the fan favorites to “try to accomplish what they couldn’t do, just to get rid of that regret that the had in the previous game.” 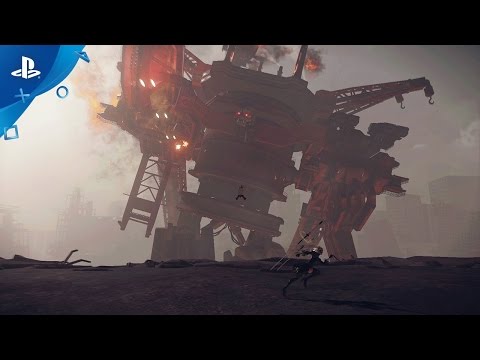 With a release date set for March 7, 2017, fans and newcomers alike will have to wait a little bit longer to see the fruits of the team’s efforts. NieR: Automata will be available for PC through Steam and on PS4, with plans to optimise the game for PS4 Pro. In the meantime, Yosuke-san informed me of plans for a consumer demo: “We are hoping to release the demo,as soon as possible, so we could bring this [NieR: Automata] to everyone. That will also include the boss battles. Please try playing that when it comes out too.”