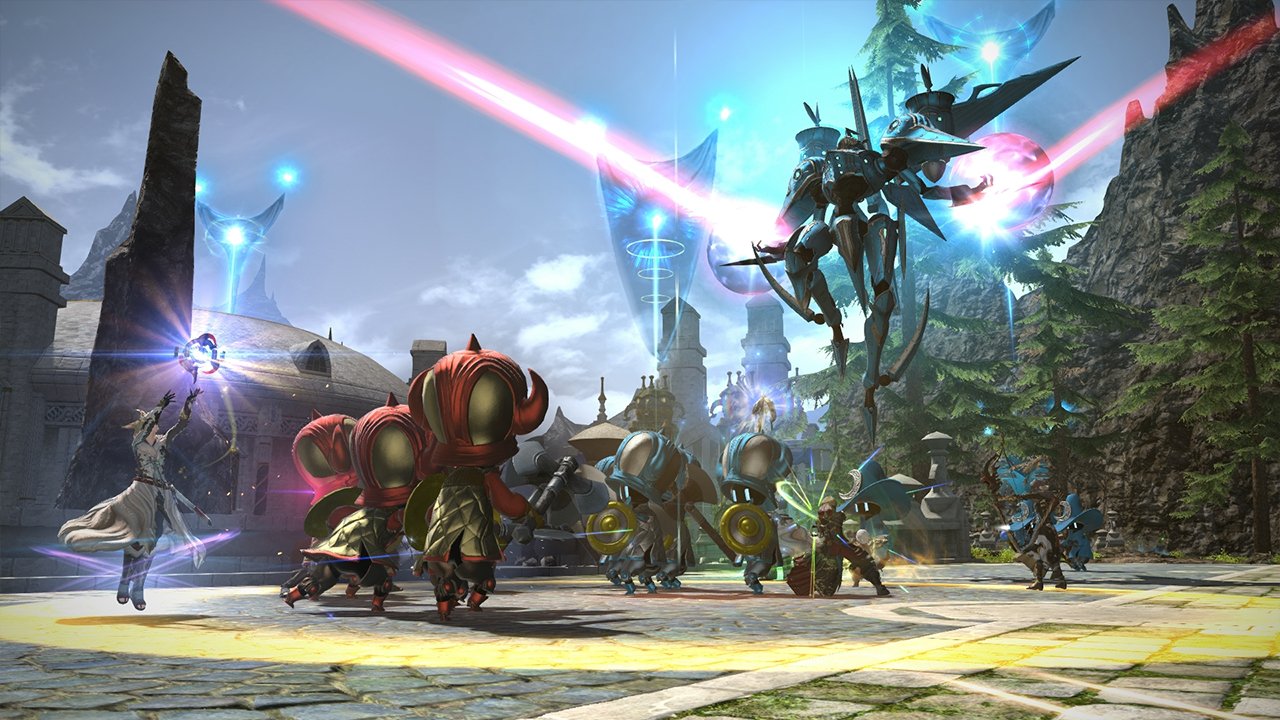 It has been more than four years since the release of Final Fantasy XIV: A Realm Reborn and it still continues to top the MMORPG charts for number of players, ranking above World of Warcraft, according to various reports. And those numbers keep growing. According to a report from Square Enix, as of August 2017, a month after the release of their second full expansion, Stormblood, including two new playable characters, the Red Mage and the Samurai, and access to a free trial of the game that would allow players to enjoy all content up to level 35, the community of players peaked at over 10 million worldwide.

But what keeps the community of this game growing?

Well, a lot of things really. For one, the team at Square Enix is dedicated to creating content that enhances the player experience with every new update. As the game has evolved, so has the gameplay evolved to meet the need of the player, with the latest features including a swimming and diving mechanic, new high level raids, increased level-cap, and of course, furthering the story of the Warriors of Light, as they battle to liberate the city-states of Ala Mhigo and Doma from the Garlean Empire.

Another reason is the teams’ devotion to listening to the community and acting to implement change to improve the user experience. Through events, Fan Fests, and even their own experiences playing as a representative of Hydaelyn as they battle to bring peace to the land, the team reaches and listens to the community to create the best experience for the players that they can.

With the latest update came a new Player-vs.-Player mode, Rival Wings. Players can hone their PvP skills and enter the arena and face off as two teams of 24 players, taking out the other team’s heavily guarded core with their own playable skills and a variety of usable goblin machina.

CGMagazine had an opportunity to speak with Producer/Director of Final Fantasy XIV, Naoki Yoshida (or, “Yoshi-P” as he is referred to by his friends and fans), and Battle System Designer for Final Fantasy XIV, Hikaru Tamaki about why they feel the community keeps growing, what fans can expect from Rival wings and further additions to this highly celebrated game.

CGMagazine: In November you announced the launch of Rival Wings. What new and exciting things can players expect from this mode?

Naoki Yoshida: Well, if we’re going to talk PvP, I think it would be best to have the person who was in charge of it be here! Go ahead and introduce the content for us, Tamaki!

Hikaru Tamaki: All right, the first thing you’ll want to take notice of are the goblin machina in Rival Wings! It’s definitely a new look and gameplay experience being able to dive into battle by piloting the mechs that appear in the Alexander raids.

The music that plays while piloting the machina corresponds to the theme for the raid encounter with that particular machina, so it might be a bit nostalgic if you challenged the Alexander raids. We brought these machina into Rival Wings with the vision of making them just a bit too strong for their own good, so I’m positive it will be exhilarating to pilot them during each match.

While the star of Rival Wings may be the machina, in order to pilot them you first need to collect “ceruleum,” their energy source. Your allies supporting you on foot are also very important—if you pilot the machina alone into battle, you are likely to see your vehicle quickly destroyed.

In any case, we first want players to experience this new type of situation, where infantry and machina work together to invade enemy territory and gain a deeper understanding of Rival Wings. By doing so, I believe players will begin to discover and enjoy the more strategic elements, such as figuring out the most efficient operation of machina or which objects you want to target first.

What would you suggest to readers who might be hesitant to try other new PvP modes and adjustments introduced up through Patch 4.1 that might make them feel more comfortable?

Hikaru Tamaki: The PvP system as a whole underwent major revisions with the launch of Stormblood, including changes that made the system easier to grasp, and greatly reduced the number of PvP-specific actions that each job had to choose from and master. This made PvP much more accessible.

As long as you have one job at level 30 or higher, you can go to the Wolves’ Den Pier and practice using PvP actions, so I would encourage everyone to try that out first.

Some players might be concerned that the breadth of gameplay has been limited because of the decrease in the number of PvP job actions, but we constructed these actions to work uniquely in PvP, which we feel can better reflect a player’s actual skill. We were able to completely separate PvE and PvP actions from a functionality standpoint, so if there are any jobs that are not performing well during PvP, we can make further adjustments and changes without disrupting game balance in PvE.

Rival Wings boasts many different types of gameplay elements in comparison to our other PvP content, but each element is extremely simple and easy to grasp. Our goal was to create content that people can join in casually, so I encourage our players to jump in without worrying about it too much.

With this new mode, defeating your enemies or being defeated by them does not necessarily affect a team’s chances of winning or losing directly. The bigger focus is on being able to move with your team in a strategic manner, so even if you are not familiar with PvP itself, I believe you will have fun!

Furthermore, the “Frontline” PvP content series from A Realm Reborn and Heavensward splits players up into three teams of 24 as they square off in a three-way battle. This type of gameplay allows players to enjoy various dynamics that occur only because of the three-team setup—the second and third place teams can go after the team in first place to attempt to shift the momentum, or all three teams may be gridlocked in a close match—I think players can easily join in to this content as well.

On the other hand, The Feast provides smaller groups of players a chance to fight and test their skill and strength, and clearly see their standing as they raise their rating through winning ranked matches. Rankings reset each season, so I think it would be great it players become interested in PvP through Frontline and Rival Wings, and then if they want to challenge themselves with a more hardcore and deep battle experience, they can test themselves in The Feast!

Naoki Yoshida: I think after hearing the man behind this content talk so passionately and extensively, all I can really say is if you haven’t experienced it yet, I would definitely encourage you to try (laugh).

CGMagazine: Since player feedback has always been essential throughout the development process, what are some things that have been implemented into this new mode that reflects the feedback?

Hikaru Tamaki: The influence that a pre-made party of experienced PvP players had on a match had long been a topic of heavy discussion for Frontline, and was something we were mindful to try limiting.

In Rival Wings, teams are comprised of six, four-person “light” parties, and I think we were able to mitigate the amount of influence each individual party could have on the match.

By having four-person parties, it also becomes easier to coordinate amongst your party, plus it makes it easier to invite two or three friends to join in. We hope players enjoy this experience of moving around as a party in a sort of smaller strike team.

CGMagazine: As Rival Wings has been out for a few weeks at this point, what has the feedback have you received in terms of balancing, end goals, etc., that will influence changes to this game mode?

Hikaru Tamaki: We have received various player feedback, and we are currently considering what adjustments we will be making.

With many people playing the new content, there seem to be different trends and changes in strategy that we see shifting each day, so we don’t want to rush into the adjustment process, but rather closely analyze the situation and continue to apply adjustments carefully.

That being said, in terms of feedback regarding the match length being long, I’m hoping we can make it so that players can enjoy speedier matches.

CGMagazine: Any plans to add additional machina and stationary weapons to this mode as it evolves?

Hikaru Tamaki: This is content we would like players to enjoy well into the future, so I believe it will be necessary to bring some level of change in the overall gameplay. If necessary, we could consider adding more machina and weapons, but there’s no point in doing so if it makes the overall gameplay fall apart, so I would like to make careful consideration to any changes. If it does help expand the game and brings a new level of fun to the gameplay, I would love to add more, though!

I already have a few learnings to consider after launching the first iteration, so once we add a second and third instalment as well as more maps and rules, I will be doing my best to make them even better than before!

Naoki Yoshida:: Rival Wings is definitely getting good reviews, and it will be a big contributor to the PvP scene in Final Fantasy XIV, so we would like to think about how we can expand on this moving forward!

CGMagazine: Since this is the 6th season of The Feast PvP, and the last before Patch 4.2, that must mean preparations for this patch are well underway to completion. What will Patch 4.2 have in store for us?

Naoki Yoshida:: In Patch 4.2, we will be implementing a new concept for “PvP Teams.” This allows players to create a team for PvP and then compete against other teams to raise their team rating to climb through the rankings.

We also plan to add new maps and make adjustments to the rules, and we will finally be making big preparations toward official tournaments. In the near future, I will be sharing more details during our Letter from the Producer LIVE stream, so please keep an eye out for more updates!

[Edited for length and clarity.]

Check out the full interview in the Best of 2017 issue of CGMagazine, available in print and digitally now! Go here for details!