Heroes of the Storm at BlizzCon 2018 just revealed the Nexus’ newest hero, and it’s Orphea, who is the Heir of Raven Court and the daughter of the Raven Lord himself.

Unlike previous heroes who arrived to the Nexus from other universes such as World of Warcraft, Overwatch, Starcraft, and Diablo, Orphea was born within it. Her story involves meeting Deckard Cain and discovering her father’s destruction of King’s Crest. Not wanting to see others hurt anymore, Orphea became a hero of the Nexus.

As the newest hero, Orphea is a mid-ranged assassin whose strengths include damage, zone control, sustainability and dueling. Her trait is Overflowing Chaos, which stacks up to three times whenever an enemy hero is hit with her abilities. These stacks increase her next basic attack damage and heal her for the damage dealt.

Shadow Waltz (Q) is Orphea’s first basic ability, which lets her slam a tendril on the ground to deal damage to her foes. Whenever an enemy hero is hit with Shadow Waltz, the cooldown gets decreased and Orphea can dash a short distance when she moves.

Chomp (W) is her next basic ability, which bites enemies and can punish aggressive melee heroes like the Butcher. As for Dread (E), Orphea unleashes a wave that deals damage to her foes. When Dread erupts at the end of the wave, it deals heavier damage and inflicts a slowing effect.

Although her abilities have a windup, pairing them with her Overflowing Chaos trait would ensure her survival in the battlefield. In addition, Shadow Waltz can contribute to team fights well, while Chomp can finish off her team’s fleeing enemies. 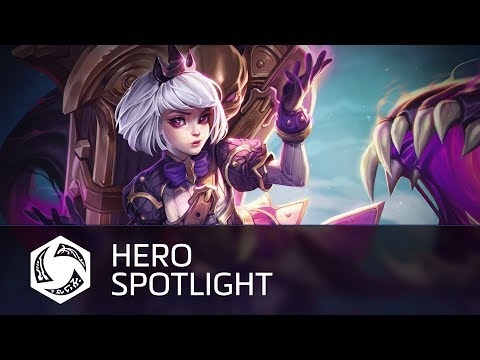 A set date and time has not been released yet, however Orphea will be joining Heroes of the Storm soon.

File Under: Activision Blizzard, BlizzCon, Heroes of the Storm