Sony has announced what games will be available for download to all PlayStation Plus subscribers during the month of October.

A post on the PlayStation Blog confirms that Plus subscribers will be able to download the HD remaster of the original Resident Evil on PlayStation 4, keeping in Halloween spirit. PS4 players will also gain access to Platinum Games’ Transformers: Devastation.

If you’re still playing games on PlayStation 3, Mad Riders and From Dust will be available to you throughout the month, with Vita rounding out the line-up with Code: Realize ~Guardian of Rebirth~ and Actual Sunlight.

As these games become free, September’s offerings, including thatgamecompany’s Journey, will revert to paid status. So get those downloaded while you’ve still got a chance. 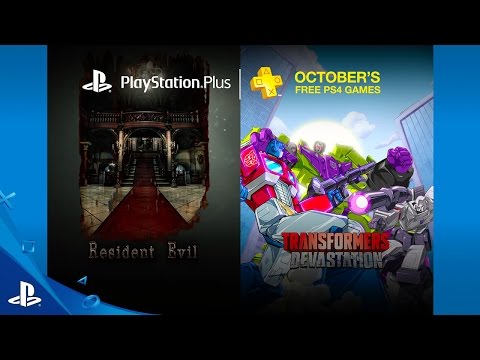 Sony introduced PlayStation Plus back in 2010, originally existing solely as a premium membership to the PlayStation Network, offering free games and access to sales to those subscribed. With the PlayStation 4’s launch in 2013, Plus also became a requirement to play online games on the system, but free online play remains a feature for PlayStation 3 and PlayStation Vita.

Up until recently, PlayStation Plus also gave users access to an exclusive television show called Powers, was cancelled after its second season, but remains available on the PlayStation Store for subscribers to watch for free.