Sonic Mania is one of the more anticipated titles starring the Blue Blur in quite some time. Since its announcement, however, Sega has only really shown off two stages. That all changed today as Sega revealed “Green Hill Zone Act 2.”

In this gameplay trailer, players will notice that Sega is taking nods from the classic Green Hill Zone like in “Act 1” which the first few frames were almost identical recreations. The same goes for this act.  Looking like an updated version of the game we played on the Genesis two decades ago, “Green Hill Zone Act 2” quickly changes things up by adding a zip line along with the fire shield that was introduced in Sonic 3 and Knuckles. 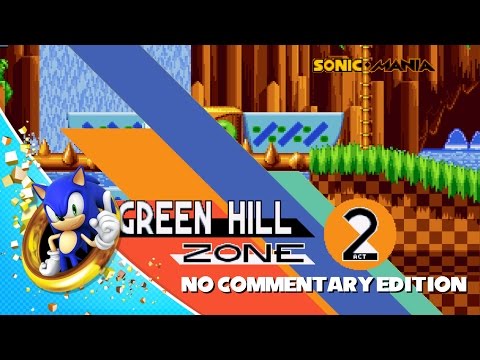 Though, the shield didn’t have the same effect in its debut as it does here. While crossing the familiar rotating spiky log from Sonic the Hedgehog, the shield actually causes the bridge to catch fire, dropping Sonic into another part of the level filled with coins and an extra life.  From there on out, “Green Hill Zone Act 2” is a completely different level, with a different experience, which is what Sega promised when announcing Sonic Mania.

Along with this, Sega also unveiled new robo-enemies for the woodland creators to take on called “Hard-Boiled Heavies.” Though no gameplay is shown of them, Sega says they’re robots designed specifically to make Sonic’s life a little more miserable. In terms of design, these new baddies seem to be inspired by Eggrobo, who debuted in Sonic and Knuckles. Interestingly enough, in the screenshot they revealed, the “Hard-Boiled Heavies” are shown flying alongside Eggrobo.

Sonic Mania was announced at San Diego Comic-Con in 2016 along with Project Sonic 2017. Sonic Mania will be available for PC, Nintendo Switch, PlayStation 4 and Xbox One.