Dream Daddy “Much Abird About Nothing” (Comic) Review 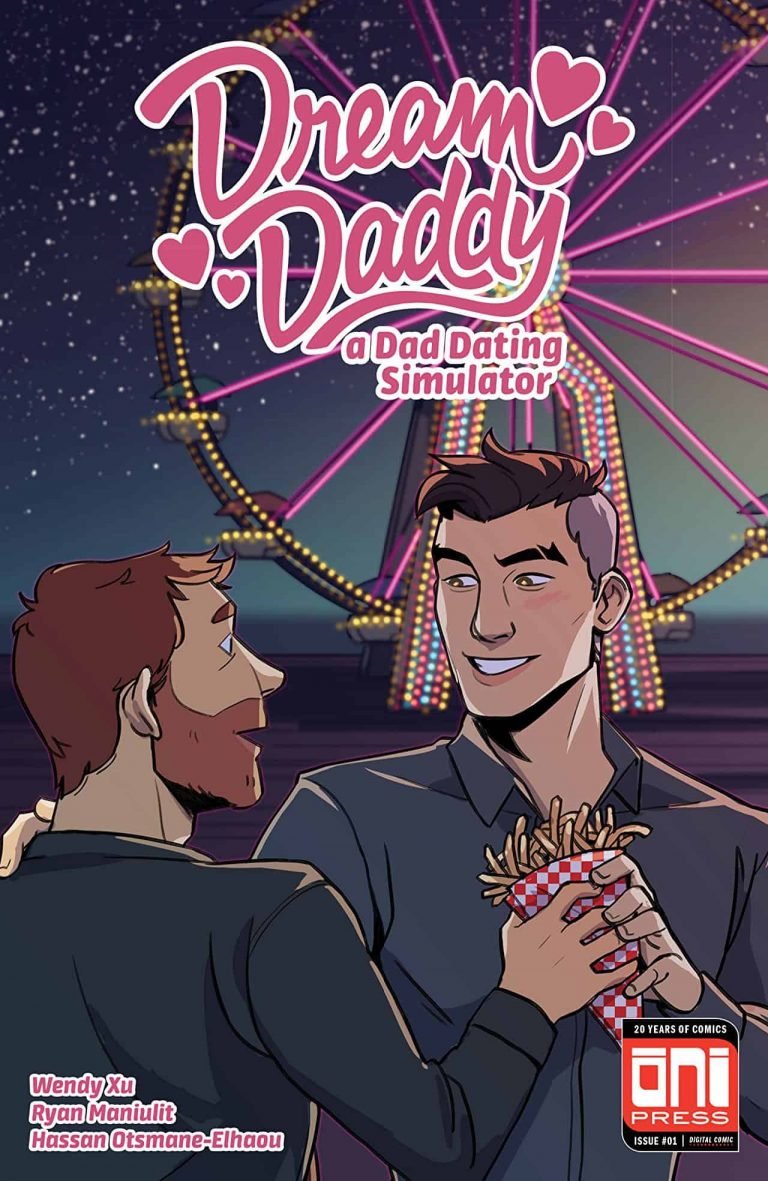 In the transition from dating sim to the pages of a comic book, all the best parts of Dream Daddy: A Daddy Dating Simulator are left intact. As I brought up in my review of the original game, Dream Daddy’s ability to capture the essence of fatherhood, growing up, and human connection is what keeps each of its ostensibly romantic routes afloat, and makes them memorable and heartwarming in their own right. However, while what makes Dream Daddy special is found in the first issue, “Much Abird About Nothing,” what made the original visual novel frustrating is still very much present: a lack of real romantic tension that would make its love stories feel genuine.

“Much Abird About Nothing” focuses on the unnamed father protagonist, portrayed as a scruffy redhead, and his relationship with Craig, his athletic college roommate. The two meet up to attend their 15-year class reunion, and the issue does a great job of selling me on their friendship. They’re nervous about seeing old friends from college, worried about if people will talk about and judge Craig for his divorce, and deal with the fact that they’re getting older and things aren’t what they used to be. What better way to explore these things, even in Dream Daddy’s comical way, than by taking these two to a place where they have to reflect on their shared youth and how things have changed?

While the dread that comes with ageing is a theme of the issue, “Much Abird About Nothing” underlines that while things aren’t the same, what matters is what you take from those days and what you’re willing to leave behind. Stories of Craig’s partying lifestyle in college are passed around by an old friend Sheela, only to be immediately countered with discussions of his children and their adoration for her books. The dads leave the reunion and the reminiscing behind to go pick up Craig’s kids, focusing on the present, both in their responsibilities and in that, despite all that’s changed, they still have each other to rely on. Then when it’s all over, protag dad calls the entire ordeal…a broventure.

Here’s where my trouble with Dream Daddy comes in, in that all the adorable antics and life lessons it brings always overshadow the series’ supposed romantic entanglement. Romantic tension is nonexistent in its love stories, and “Much Abird About Nothing’s” climactic kiss feels unearned. Craig, perhaps in character, refers to protag dad as “bro” the entire time, as he did in the original game, and there’s no concrete foreshadowing as to their relationship being anything beyond platonic. It’s been a full year since Dream Daddy launched, and this was a problem ingrained in nearly all of its romantic storylines. A year’s worth of time to reflect on the issues that held a good dad simulator from being a great dating simulator and still Dream Daddy seems to struggle to deliver upon what it’s supposedly selling.

Despite the heteronormativity that a lot of queer men suffering from internalized homophobia would like to have others believe, gay romance is not just two men who just hang out and then make out, there’s an intimacy there that leads up to the kissing, just like any other romantic relationship ever experienced and written, that Dream Daddy has consistently failed to capture.

The comic series has five issues scheduled, which isn’t enough to cover all seven dads the game did, at least not in the same romantic way it did in-game, so I would much rather see these comics focus on what the game does well: character. If it does decide to focus on romance, whether with Craig as a canon love interest for the protagonist dad, or with a different love interest, I would love to see Dream Daddy truly explore a romantic relationship in one of them. No more lead-in. Just show me that this series is capable of portraying two men in love, rather than two men who hang out and then kiss at the end.

Dream Daddy is still cute and heartwarming, but fails to bring genuine romance to the comic version of its slice of life.
REVIEW SCORE
5
File Under: Comic, Dream Daddy