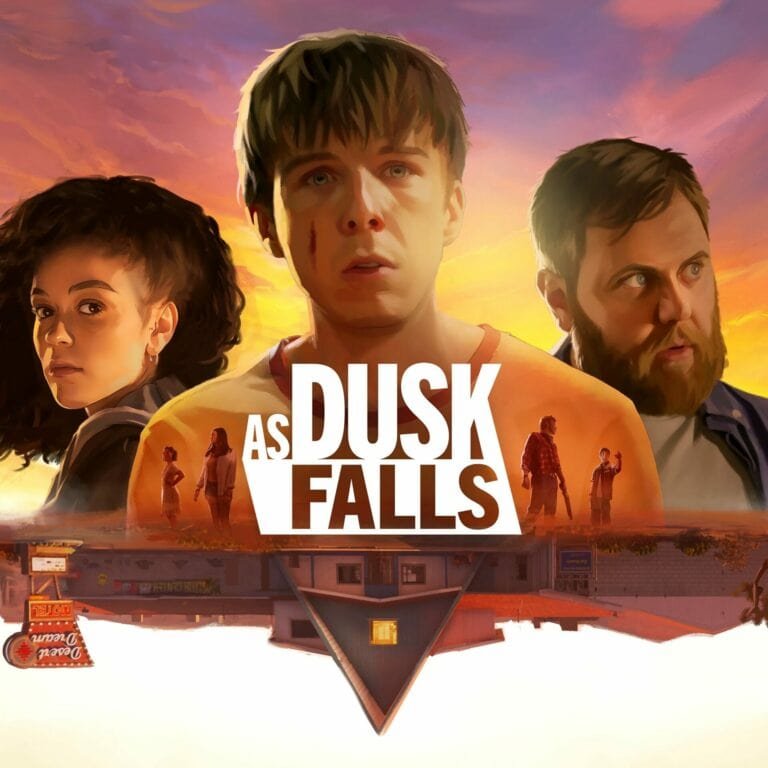 Is As Dusk Falls the future of mainstream video games as we know them? This question popped into my head rather frequently during my review play through of INTERIOR/NIGHT’s interactive thriller set principally in late 1990s Arizona, and I’d be lying if I said there wasn’t any weight to such a theory.

Not only is Microsoft proudly publishing and promoting the game, but it also just so happens to be launching on Day One into Xbox Game Pass, a game subscription service that is often unofficially referred to as “The Netflix of video games.” It also doesn’t hurt that As Dusk Falls’ bingeable, six-episode format, genre and subject matter fits right into the kinds of content that’s popular on several streaming services as of late.

Perhaps what’s most intriguing however is that while As Dusk Falls aims to tell its own unique story, it’s also deliberately designed to be a game for anyone and everyone, allowing up to eight players to play the game together offline in couch co-op, online, or a mix of both, along with the option for each player to use an app on one’s smartphone as an input device instead of a controller.

Moreover, As Dusk Falls supports crossplay across current Xbox Platforms, Xbox Game Pass, Windows PC, Steam and xCloud streaming on a multitude of compatible devices, so apart from the obvious and expected exclusion of PlayStation and Nintendo consoles, there is practically no reasonable place that As Dusk Falls can’t be played. For a seemingly small game, it’s casting an extremely wide, Microsoft-branded net.

Readers who previously checked out my preview will recall how I praised the writing in As Dusk Falls for being surprisingly tight for a game of its nature and how the consequences of one’s choices are felt more quickly than they are in other “cause-and-effect” games, in no small part due to the narrative’s shorter length (approximately five to six hours for a single, first-time play through).

That impression successfully carries on beyond those initial two chapters, at least for the most part. As one might imagine, it’s difficult to discuss As Dusk Falls with any sort of depth without potentially revealing spoilers, but by now it’s no secret that the story is meant to encompass not only the ill-fated robbery and standoff at the Desert Dream Motel that forever entwines the fates of Vince’s family and the Holt Family, but also the aftermath of these events 14 years later.

As a result there are going to be some unfortunate outcomes regardless of players’ decisions, both immediate and down the road, and it’s that inevitability of the shit hitting the fan despite one’s best efforts certainly keeps the tension high even after the story hits its peak and begins its downhill roll towards the conclusion.

In particular, the arrival of a completely unexpected character at the start of Chapter Three does a great job of turning players’ expectations on their heads and exploring the Holts’ side of the story, which up until that point leans almost exclusively (and unfairly) on young Jay’s shoulders to drum up any sympathy for the actions of his far less-likeable elder brothers.

Sadly, even the best TV series streaming on popular platforms have their low points, and As Dusk Falls’ hybrid drama-video game DNA is not immune to the shortcomings of “The Writers’ Room.”  As Dusk Falls’ story unfolds in two acts which are aptly named: “Collision” (Chapters 1-3) and “Expansion” (Chapters 4-6). Naturally, “Collision” represents the explosive, coming together of the story’s two principal families and the immediate consequences, while “Expansion” primarily deals with the ripple effects and aftermath of those events 14 years later. In comparison to the first act, the second act feels like a long, symbolically protracted exhale.

There’s no question that Expansion works well thematically and succeeds in filling in a number of story gaps, but it also loses a noticeable amount of momentum due to a shift in focus to some of the story’s less principal cast whom players only get to take control of once.

Meanwhile, Vince and Michelle’s daughter Zoe, who is featured both as a child and as an adult in practically every piece of marketing for this game and whose grown-up face opens the entire story, shockingly winds up being criminally under-used, becoming playable only in the final chapter. If Dusk Falls were a TV show or movie, this would be tantamount to false advertising. In games speak, we’re talking Solid Snake/Raiden-level bait-and-switch stuff here.

INTERIOR/NIGHT’s writers also make the regrettable yet common mistake of using time jumps (flashbacks and flash-forwards) as more of a narrative crutch in “Expansion,” frequently flipping between events that occur not long before or after the Desert Dream Motel incident, rather than allowing the story to just move forward naturally.

Just like with TV shows and films that lean on these conventions far too much, the writers left plenty of rope to hang themselves with, tripping up on continuity holes created by the jumps, as well as inadvertently exposing obvious “filler” content whose inclusion is largely to set up and/or satisfy potential logical paths down the line.

Thankfully, As Dusk Falls’ script is so deftly written that these few rough edges are quite easy to look past, especially when measured against much grander achievement that INTERIOR/NIGHT have accomplished. Aside from being an engaging and often thrilling tale, the highest praise I can give to this game is that its multi-branching narrative never quite went where I expected it to, and that the fast and furious choices it presented me with were often excruciating to make, as I knew the permanent repercussions of those choices would soon come to collect, sometimes within seconds.

As Dusk Falls is a thriller that doesn’t mind leaving some ends untied and some questions unanswered, and is even bold enough to hint that there might be more stories in its universe to be told. I’m puzzled as to how that might be achieved, but nevertheless I intend to follow this developer’s next project with great interest.

A second, well-deserved shout out has to be given to this game’s bold visual presentation and animation style, a look that was painstakingly created by developer INTERIOR/NIGHT filming all of the game’s actors in costume on-set and then hand-selecting the still shots which best captured both the narrative’s key story beats and the raw emotion of the actors’ live-action performances.

Each one of these over 15,000 frames were then hand-painted and combined with a dynamic camera and actual 3D assets in order to complete the game’s kinetic yet painterly look. Once players get past the somewhat visually controversial “slideshow” appearance, they’ll be hard-pressed not to form instant emotional connections with the cast of characters, as the actors are all experts at what they do, and INTERIOR/NIGHT has done an impeccable job of immortalizing their work.

If there was one actual tragedy of having the opportunity to review As Dusk Falls in advance, it was that I was unable to explore the multiplayer side of the game, thanks to the perfect storm of having no local friends available for couch co-op, no built-in matchmaking to hook up with the few fellow journos out there who had an early review copy for a private match, and a pre-launch embargo which prohibited any open discussion or streaming of the game until today.

The latter is especially unfortunate, as in addition to the multiplayer modes I mentioned previously, the game also features a built-in “Broadcast Mode” in which viewers on Twitch can vote on decisions, while the Streamer and any local co-op players they may be playing with can override some of those decisions with a limited number of vetoes.

The important thing now though is that in less than two days, As Dusk Falls will finally be available to either experience via Xbox Game Pass-compatible devices and/or purchase-to-own on Xbox platforms and PC, and the entire suite of multiplayer options will be available to them out of the gate.

Of course, in addition to the aforementioned mobile app, there will also be a bevy of accessibility features for the game on both Console and PC that can be tweaked to make the experience as enjoyable as possible for everyone, regardless of their physical challenge or limitation. I’m sure it sounds like I’m reading off a sell-sheet, but the excitement and enthusiasm I have for the potential of As Dusk Falls is quite real, not to mention the possibilities for future games like it that will be created in the near future.

As Dusk Falls is the kind of game that Xbox Game Pass was made for, in the best possible sense of such a compliment; it’s a narrative thriller and adventure that’s easily worth the price of admission, and more importantly, it’s absolutely worthy of your time.
REVIEW SCORE
9
File Under: Microsoft, Xbox