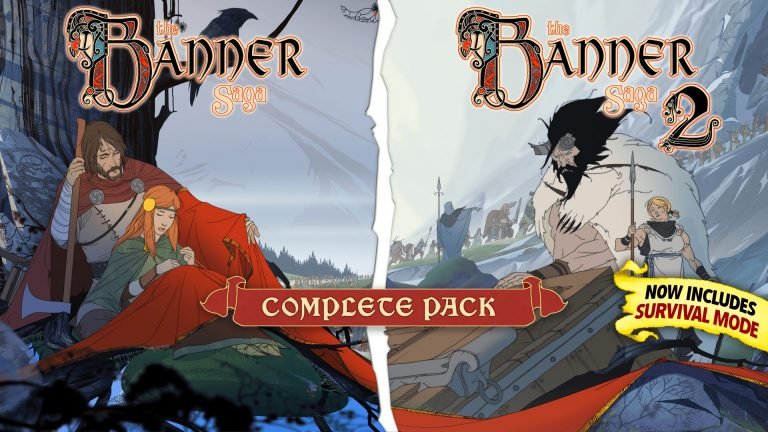 Banner Saga started a revolution on Kickstarter. As one of the first successful gaming projects, many more followed—but a lot of them didn’t deliver. Banner Saga did. In fact, Stoic has been so successful that they created a follow-up that’s basically more of the same, much to the delight of existing fans. There are some muddy waters to wade through, especially on console, but man does the gorgeous art style still hold up, among other aspects in this sterling dual-release Banner Saga Complete Pack.

I won’t spoil anything, but the first game opens up on a massive downer. The gods are dead, and man and giant alike have allied against the dredge, the evil faction of the game that seeks to rule everyone else around them. It’s an easy idea to pitch, but the way Banner Saga sells it is fantastic. There’s just an honest feel to it, more so than a lot of other games that feel like they’re pandering to a common denominator. There’s a Game of Thrones-esque tension to everything, with tenuous allies and death at every turn. There isn’t much voice work to speak of, but when there is, it’s appropriately dire and deliberate.

Among cutscenes where you’re making small choices and running through basic dialogue options (read: optional questions that you’ll probably just cycle through anyway), the drama is cut up by action sequences in the form of grid-based battles. It’s a strategy joint through and through, with all of the turn-based baggage that brings. Banner Saga adds some finesse of course, with the power to plus up your attacks with exertion points to do more damage, concessions for correct positioning, and the choice between breaking armour (for a more long term battle) or dish out straight damage. You gain a few abilities, level up, and repeat.

As a big strategy fan I’m accustomed to the slower pace of a thinking man’s battle system, but it doesn’t really have the chance to get all that in-depth. Banner Saga 2 expands upon all of the ideas crafted in the first, but starts with a distinctly different tone. All of the exposition and wonder of the original is over. Now you’re faced with staring down more of the depressing worlds around you (in a good way) and everything kicks off even quicker than it did in the original.

The second game is literally a continuation. I mean, it even picks up on Chapter 8, so don’t think this is something you can just jump into. In fact the best way to do it is to beat the first, then carry over your loot and statistics (as well as your decisions). If you’ve already beaten the original on another platform and don’t feel like doing that, you can start the second one without issue, and even watch a short in-game recap video. This time it feels like most of the ideas Stoic wanted in the first are in, as there are more classes to deal with (internally and externally) as well as a better levelling experience peppered with more abilities to choose from.

But as well as all of this works (even if it’s just operating at a base level) my main issue is how dated the game is outside of its hand-drawn art style. Some menus, to be blunt, are wonky and unfinished. They often load gradually and feel patched together. The controls are fine on PC, but on console the cursor can be difficult to move exactly where you want it (many other SRPGs on consoles do it better), and the UI is rough with MS-DOS style walls of text for some abilities. In-game icons are also very small, not detailed, and hard to read.

As a complete package, the Banner Saga series is a triumph in art direction. Though it suffers from some archaic technical choices (mostly the text and layout of the menus), both games never overstay their welcome, and succeed in plummeting us into a new hopeless world. With yet another fully funded game on the way that will also continue the story, you also don’t run the risk of getting burned by investing in the existing duo.

A sheer work of art with some archaic design choices, Banner Saga still dazzles now as much as it did during its release.
REVIEW SCORE
8
File Under: