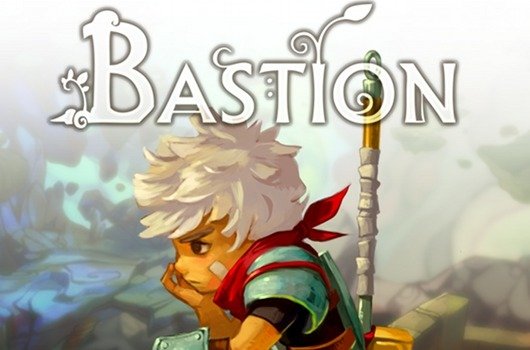 The narrator of Bastion tells us that stories usually start at the beginning, but that this time it’s different. It’s a tease, of course, but a well constructed one. Bastion, the new xbox live arcade from Supergiant Games is all about the slow reveal, from aesthetics to story to mechanics, everything, it’s all about the gradual building of something powerful.

You control the Kid, one of the few survivors of the calamity, a world destroying event. You’re tasked with rebuilding the Bastion, a safe haven where the survivors of the world are told to meet up in case of emergency. The Kid travels around fighting enemies and gaining experience, building and upgrading the Bastion while looking for survivors. Like every other element of the game, there’s a simplicity to that central idea that eventually spirals out into a robust experience.

The game underemphasis the number’s game that bogs a lot of RPGs. Levelling up gives more health, but little else. Weapons can be levelled up with the right equipment and fragments, the currency in Bastion, and can only be done in the Bastion area between stages, preventing long pauses in the action during levels. In the Bastion, building can be built and upgraded giving their own set of perks. An armoury allows you to change your weapons between missions, the forge allows for upgrading, and the distillery allows for passive stat enhancements, to name a few. These buildings can only be built one at a time, giving a slow trickle of complexity. The base game is compelling enough that each new quirk in the system adds a welcomed layer of complexity.

The designers pare the number of choices and make every decision interesting. The game allows for two weapons to be carried at a time, and each weapon has its own use. There’s a short-range flame thrower, for example, that can cause burning damage, but can only be used in short bursts. A long range rifle gives a single powerful shot with some kick to it, but takes a while to aim. The pike doesn’t do much damage, but its got great range. Mixing and matching these weapons is enjoyable in and of itself.

As you walk through the world, tiles come up from nothingness to create the world in front of you. The game’s isometric view is close enough to see the detail that forms around you, it’s lush colours. The character designs owe a debt to anime, and the rest of the game has a full colourful cartoonish style to it. The enemies are also unique and colourful, visually standing out. The wide variety of enemies have different attack styles and a skilled player can turn that against other enemies.

If that was all there was to Bastion, it would still be one of the better games of the year. That Bastion’s polished gameplay isn’t its most noteworthy feature is not so much an insult, as high praise for the thought put into the rest of the game.

A deep Ron Perlman-esque voice narrates the game. The narrator, as a literary device in games, has been used for decades, for either plot exposition or as a gentle strategy guide. The narrator in Bastion comments on the structure of the story, and is simultaneously its lynchpin. He is the provider of context, objectives, and backstory. He occasionally makes quips on things the player does. Smash up a room full of items and the narrator says, “The Kid just rages for awhile.” Pick a new weapon layout and he comments on it. What would be inconsequential actions in other games takes on a meaning in Bastion. They are important enough details that the narrator is telling them in his story. The narration coupled with the world reconstructing around the Kid implies that every action is unique, that the game exists just for you. The actions take on a new relevance, every action suddenly seems worthy.

The Stranger narrates with a wry wit that travels far with the world weary voice. The story is told entirely through this voice, but it never feels unnatural, even though it really should be. Logan Cunningham, the voice actor responsible for the narration, should be celebrated for making all of this work. He manages to create a character despite the fact that the narrator rarely talks about himself. Solely through infection and tone he builds this image of a broken down old man in a broken down old world, one that we feel utterly comfortable with. Trying to play the game on mute, you realize how often the narrator hints at an upcoming danger, creating a sense of tension. Or the tidbit sized pieces of lore he drops, never enough to overwhelm the player, but enough to connect the various disparate levels into a cohesive whole. The way he tells us about enemies without really giving too much away. The voice is so ubiquitous that it feels like it belongs, and makes you feel like you’re being let into the story.

Playing the game in New Game Plus mode after completing it, I came to appreciate the game all the more. The careful structure of the game became more apparent, and how the way the game gradually unfolds itself to you is not unlike the way the world of Bastion builds itself as you walk through it. Or the way the story is very deliberate in its execution and drip feed of information. There comes a point near the end when you realize what the game has been building up to, a question that deliberately asks you, the player, how invested you are in what the game has created for you. Choice in videogames is usually a fallacy, because you have the option of starting again and going down the other path, but playing again, that choice is still arresting in its severity. It works, because Bastion and its creators make us invested in what we are doing and everything we’ve done, and experiences like that are hard to dismiss.

The narrator of Bastion tells us that stories usually start at the beginning, but that this time it's different. It's a tease, of course, but a well constructed one.
REVIEW SCORE
9
File Under: Arcade, Bastion, Indie Game, Microsoft, RPG, Xbox