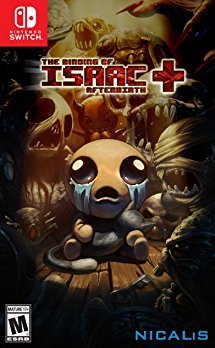 The Binding of Isaac has had quite an interesting little journey over the past few years. Initially banned from Nintendo platforms thanks to its creepy, crawly take on Catholicism, the former Newgrounds hit eventually found its way onto the 3DS long after finding an established base on other platforms. Now, Nintendo seems to have cozied up to Edmund McMillan’s strange roguelike odyssey, with Afterbirth+ getting its only physical release on the Switch—and being treated like a first-party release in everything but name only.

It’s nice to see this turn of events, because Binding of Isaac has always been a love letter to classic NES games, The Legend of Zelda in particular. Everything from its room layouts to several enemy types are directly inspired by the 1987 classic, something this release wears on its sleeve with its included instruction manual being a page-by-page riff on Zelda’s (right down to a typing error.) In a way, it feels like Isaac and his creepy friends (who might just be Isaac in an assortment of wigs) have finally found their way home.

Binding of Isaac itself feels right at home on the Switch, too. Its roguelike gameplay can be enjoyed in long binges or short bursts, and its visuals look good on a big or small screen. Apply these statements, then, to Nintendo’s dark horse console. I’ve found myself curled up on the couch under a blanket, doing some runs in handheld mode, then popping it into the dock, snapping off the JoyCons and playing some local multiplayer with my bud. Yes, Binding of Isaac has been portable before on the 3DS and the Vita, but the ability to have an easy way to experience a portable take on the game, a console version, and easy multiplayer makes this version an enticing offer. The fact that this is the definitive version of the game, complete with everything available on other platforms, only sweetens the deal.

My only bone to pick is that in local multiplayer, the framerate definitively suffers. Some of the more graphically intense areas, in particular anything in the Womb levels, really chug with two separate players. This doesn’t bother me all that much, as local multiplayer is something that isn’t necessarily the most popular way of enjoying Binding of Isaac. But that said, it’s disappointing when it is a fun little feature that I enjoy, and I do hope Nicalis puts out a stability patch soon.

But considering all the benefits of this release, from the versatility of the platform to the breadth of content (which can easily last diligent players several hundred hours,) I’d be hard-pressed to dissuade people from picking this up. The Binding of Isaac: Afterbirth+ is my favourite version of this fantastic game—a stellar port of a cute, creepy, and somewhat profound work of art. A must-have for all Switch owners.

The Binding of Isaac: Afterbirth+ is a perfect fit for the Switch, and barring some framerate problems in local multiplayer, is arguably the best way to play this modern classic.
REVIEW SCORE
9
File Under: Binding of Isaac, Nicalis