The Binding of Isaac (PC) Review 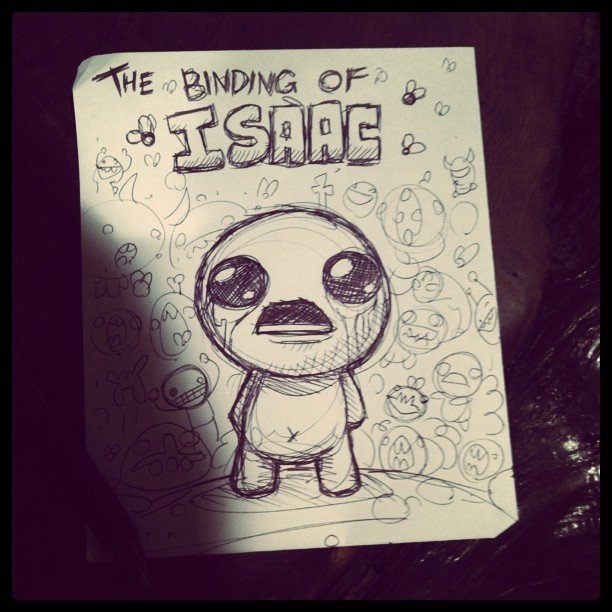 It isn’t really possible to start off a review of The Binding of Isaac without mentioning two things: the pedigree of its developer and its setting. The game comes from one half of Team Meat, Edmund McMillen, and, like his studio’s breakthrough, Super Meat Boy, Isaac is a throwback to old-school game design mixed with irreverent humour and a stomach-turning (but ultimately charming) visual style.

So, then, the setting: a nightmare series of basement rooms that the player navigates by controlling a sobbing five-year old named Isaac. See, Isaac’s mother is a God-fearing woman who hears the voice of her lord and, like all God-fearing people, does whatever it takes to obey. At first God is vague, instructing her to keep Isaac pure from corrupting influence. She takes away his Gameboy and stuffed animal. God isn’t satisfied — so she strips Isaac down and locks him in a bare room. God speaks to her again and says that, while abusing poor Isaac was a good start, she needs to prove her loyalty with something better — like a sacrifice. She sees the sense in this and stalks toward her son’s room with a butcher knife.

This is when Isaac escapes through a trap door in his room, fleeing from his homicidal mother, and finds himself in the surreal world of his basement.

The Binding of Isaac is named for the terrifying biblical tale of Abraham being commanded to sacrifice his son in order to prove his loyalty to mean ol’ God above and, aside from the obvious plot comparisons, it maintains this theme throughout by translating the story to modern times. Taking the structure of pre-3D era Zelda and the procedurally generated dungeons of countless roguelikes, Isaac is a game of exploration, combat and item-based survival strategies.

Each “floor” of the basement constitutes a level, and each level consists of rooms with varying obstacles, enemy types, item pick-ups and doorways. The goal of every floor is to get as much gear as possible (from health pick-ups and weapon upgrades to bombs and status enhancements) and, then, take down the boss so as to be able to continue forward. This may sound simple and, on the surface, it is. What makes the game compelling (and it is very compelling) is that, like the Old Testament God, The Binding of Isaac is not very forgiving. Isaac starts every playthrough naked and only able to attack by shooting his constant stream of tears at enemies (seriously). Though it doesn’t take long before new attacks and items can be found, vulnerability is a constant, and players will frequently find themselves overcome by difficult — but never impossible — odds.

Some of the same type of masochism that characterized Super Meat Boy’s exacting platforming has made its way into Isaac’s design. Here though, instead of the tension of carefully timed jumps Isaac’s difficulty is based on longer-term thinking. Every floor requires the player to decide whether they want to bum-rush their way to the boss (and the next level) while holding onto the health and loot they already have or hazard the exploration of new rooms filled with useful items — but additional enemies. On a room-by-room basis, the game isn’t terribly hard, taking on the characteristics of a moderately challenging twin-stick shooter (with Isaac’s tears acting as the default bullets) that is never overly daunting. Attrition presents the bigger problem. Delaying heading for the boss means more and more chances for your supply of health to dwindle, making it possible to go into a climatic fight with great weapons but, maybe, a single blinking half-heart of life remaining. The fact that there are no checkpoints at all — not even at the beginning of a new level — adds yet another layer of tension to each session of play.

Every death is, however, the player’s own fault (well, you could get to blaming procedural algorithms but that would just be silly) and, mixed with the short run time of a complete run-through (between half an hour to an hour) the game encourages frequent attempts and has the same type of  “one more try” addictiveness as Meat Boy. Players who aim to collect every item, unlock every playable character or just check out various combinations of gear (pick-ups like “Mother’s Panties” or the head-worn “Coathanger” all show up on Isaac after being grabbed up during a run-through) can expect to be hopping into the game for the foreseeable future. For its criminally low $5 asking price, Isaac packs in a nearly limitless amount of quality play.

McMillen’s crisp, cartoony design work makes all of the title’s collectibles actually rewarding to seek out as well, if for no other reason than to see how they look when worn on Isaac. From the enemy types to the menus, The Binding of Isaac is a lo-fi but visually stunning game. The fantastic presentation is further accentuated by the welcome return of Super Meat Boy composer, Danny Baranowsky who has crafted an eerie (but enjoyable) soundtrack filled with tunes that range from melancholy mood-setters to catchy, hummable melodies.

The humour of the game together with excellent art, sound and gameplay helps offset the overwhelmingly grim material that comprises Isaac’s setting, storyline and distinct sense of hopelessness (you do, after all, play as a boy about to be murdered by his mother). The jokes can be a tiny bit hit-and-miss (the internet “troll face” does make a couple of unfortunate appearances) but is, for the most part, silly and tongue-in-cheek enough to match the general aesthetic. When quitting out of the game, for example, the menu (written in a legible approximation of Isaac’s childish scrawl) will ask you simply: “Are you sure you want me to die? Yes/No.” For all of its horror, the game is still ready to make you laugh — even if uncomfortably.

Despite what this might seem to suggest, though, The Binding of Isaac contains clear authorial intent that aims much higher than just unsettling the player with black-as-tar comedy. After getting past the Norman Bates inspired imagery of a boy dressing up in his mother’s underwear and high heels to defeat aspects of his crippling memories, there’s the matter of the constant tears and the flashbacks to scenes of schoolyard bullying, juxtaposed with both a lack of maternal affection for the son and a wealth of spiritual affection for a god. It’s not too much to assume that, with Isaac, McMillen and Himsl are posing some pretty serious questions about familial and religious loyalty, framing them within the dual devices of surreal gameplay and an age-old story.

The game does fall short in a few technical areas (performance hiccups and the lack of controller support in a title that seems perfectly fitted to it) but none of these issues greatly detract from what the game does accomplish. Considering everything it does right, there’s simply not enough wrong here to make much of any lasting, negative impression (and, in any case, any minor problems could easily be resolved through a patch).

And there certainly isn’t anything off-putting enough to stop players from repeatedly coming back to what is a truly great game that shouldn’t be missed.

The Binding of Isaac is like a game of poker: the element of luck combines with a player’s skill to create either a favourable or unfavourable outcome. And, just as with poker, Isaac is a game that is endlessly fascinating and changeable, ready to offer up randomized odds and bite-sized sessions of strategic challenge.

It isn’t really possible to start off a review of The Binding of Isaac without mentioning two things: the pedigree of its developer and its setting.
REVIEW SCORE
9
File Under: Horror, Indie Game, PC, Platformer