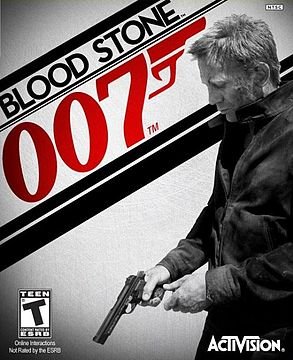 Stylish, clever and efficient; James Bond is all things his most recent video game is not. Blood Stone 007 is the first non-movie Bond game to be released in the last 7 years, but there’s no escaping the movie license curse as this tedious adventure feels as lackluster as any other rushed-to-deadline project.

Blood Stone’s story follows Bond as he chases some top secret intelligence around the world that leads him to stop an assault on the G-20 in Athens, discover a secret chemical weapons factory somewhere in Serbia, and chase down an assassin in China to uncover who’s really at the bottom of everything. It barely fits together cohesively but the plot does feel like a James Bond flick, albeit one of the worst one

The concept behind the game makes perfect sense; Bond would logically work better in a stealth-action game than a traditional FPS. However, through really poor execution Blood Stone barely manages to exist as a competent shooter, never mind the stealth element

A cover system allows James to stick to walls and barricades to sneak around relatively efficiently to perform melee takedown move This works well when level design is specifically arranged to provide players with opportunities to use the mechanics, but with a super linear setup there’s no room for player innovation during gameplay and everything feels by the number

Far too often the game dissolves all sense of stealth and turns in to a straight-forward shooting gallery with enemies spawning in sequence until you’ve wiped them all out and can proceed. There’s no room for ingenuity or style; it’s just aim, pull, and repeat.

This wouldn’t be a problem if the kills were satisfying, but the T for Teen rating takes blood out of the equation leaving only a bland death animation to signify victory. What’s strange is that despite this concession made for younger audiences Blood Stone remains an incredibly violent game, even more so than some M rated titles like Halo or Resident Evil, leaving the rating rather nebulously chosen.

Bond’s cell phone plays a small role in the game mechanics as well. At any time players can switch their normal view to a HUD-intensive mode where enemies, weapons, and the game’s linear path of progression are highlighted in the game world. This overlay is a little helpful for those who want to know exactly where their enemies are, but isn’t pulled off with the same finesse other games with similar mechanics like Splinter Cell: Conviction or Batman: Arkham Asylum display.

The cellphone also acts as a puzzle solving device, which in Blood Stone amounts to players finding an unlockable computer or door and proceeding to hit buttons rhythmically, Guitar Hero style. It’s a clumsy way of handling the puzzle elements as the minigame requires no actual thought, just twitch motion

Periodically the game will switch to a vehicle chase sequence with players taking control of a luxury car racing down a highway or city streets while everything around them irrationally explode These are probably the most exciting segments of the game and show a level of polish uncharacteristic to the rest of the game, but they are still flawed by sloppily cut corner

Cars don’t take damage and smashing in to a wall or oncoming vehicle will often leave players’ bouncing off and spinning out rather than collapsing on impact. There’s also a lack of realism to the vehicle models, which is surprising considering developer Bizarre’s pedigree in the racing genre (Project Gotham series).

Bizarre does manage to capture a good sense of speed as you’re chasing your target through the streets, but that and the spectacle of triggered explosion events are about all they get right. Despite their efforts the experience is eroded by a lot of minor quibbles, enough to detract from the only believable experience in the game to leave Blood Stone unconvincing as a whole.

Daniel Craig and Judi Dench lend their likenesses and voices to their in-game personas but a combination of disturbingly stone-faced modeling and some lazily phoned-in voice work leaves the characters (and every other character) feeling flatter than the disc they came on. Even the usually bubbly Joss Stone who plays ‘the girl’ fails to bring her character to life.

Stone does however breathe a little life in to the title sequence with a classy performance of I’ll Take it All, a unique piece done to accompany the traditional sultry black silhouettes and clean typography. Unfortunately this is the only section of the game that’s worthy of carrying the Bond name.

Faces and car models aside, the environmental graphics aren’t bad but hardly making up for the rest of the presentation. In fact, the juxtaposition of poorly rendered people in much better designed environments makes for a very obvious visual disconnect.

Overall the single-player campaign fails to deliver the excitement, polish, and satisfaction the James Bond series is known for. It’s a sad amalgam of a barely competent shooter with an under-par racing game with a dash of poorly developed stealth thrown in.

There are a few maps included with the game, but they’re large, open boxy affair Players will rarely feel a sense of place in the bland arenas, and they don’t seem to be balanced properly as enemies can easily cross the threshold and wind up near spawn points for some aggravating camping.

There is also a leveling system that slowly unlocks new weapons and skins as you play, but no one in their right mind would suffer through it long enough to see completion. With every second of every match you can feel that the multiplayer was a last minute addition with no effort put in, just for the sake of appeasing the feature checklist.

Blood Stone 007 is a failure in every sense of the word, going through the motions players will beg for the game to end. There is no way this is worth the cost of admission, even when it finds its way to the bargain bin.

Blood Stone 007 is a failure in every sense of the word, going through the motions players will beg for the game to end.
REVIEW SCORE
3
File Under: Action, James Bond, Microsoft, Shooter, Xbox