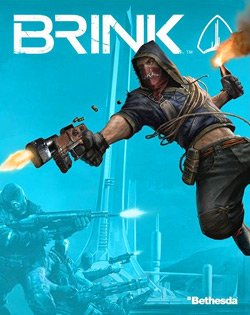 BRINK, developed by Splash Damage and Bethesda Software, is a derivative first-person shooter with an emphasis on multiplayer. What was promised is far from what was received. We were fed lines about how BRINK was going to revolutionize the way gamers played online and offline, how it would be a streamlined experience built upon revolutionary technology. The game, I will admit, looks nice and the characters have a unique, if slightly stereotyped design sense about them, but beyond the 102 quadrillion unique configurations what we have is a game that you’d regret pre-ordering. If you were expecting a parkour-inspired, dystopian game with a deep, well executed story and addictive online play, think again.

The Ark was as an experiment. It was a utopia, a self-sustaining city. But as global water levels rose and cities drowned, the Ark was cut loose from the mainland. Now the Ark is a haven for disease, poverty and famine, and the inhabitants want to escape. And the resistance, led by Brother Chen, will go to any length to leave. All this sounds like a great lead up to an amazing single-player campaign. You have the basic elements: suffering caused by antagonism, discontent within a population of dishevelled individuals, a utopia turned dystopia, and a resistance being held under the thumb of a mandate of counter-terrorism. Then there’s your character, an ambiguous individual who has found themselves in the middle of the conflict destined to play an integral role. He can play on either side each with their own storyline to follow. BRINK is not about story.

Creative director of BRINK Richard Ham said that during the intervening load times between online match is when you’ll see narrative exposition. How does thirty seconds of Brother Chen in his Mako-like gibbering constitute as a story? I don’t know. BRINK’s story is told through short, skippable cutscenes and a database full of audiologs and text documents. When you have a setting like BRINK’s, a dystopian environment so filled with greeble in a vast, mechanically inspired city, and an immersive world, how could Splash Damage and Bethesda fail to deliver a story? Security Captain Mokoena’s campaign opens with him resisting a mandate of non-violence forcing him to ready his men for civil war. For the rest of the game, he is a voice over the radio and nothing more in a story that feels optional.

BRINK is a decidedly multiplayer experience. It sacrifices story for quick matches filled with little to no personal impetus. There’s never any reason why your character is fighting. Brother Chen or Captain Mokoena could have addressed your character directly – Elder Scrolls 4 style – to give you an added reason to play. That never happens and you feel like an aimless pawn within a non-existent revolution. However, you can be a unique pawn with the 102 quadrillion ways to customize your character, but what does that really add to the game other than colourful helmets?

Is it just me or is the Ark inhabited solely by middle-aged men? The 102 quadrillion ways to customize your character could have been squared with the addition of female characters. Splash Damage and Bethesda alienated one half of the video game crowd by doing this. The developers have said that it was either depth for male customization or shallowness for male and female characters. Bethesda has traditionally given both males and females equal representation. How representing both sexes equally could be considered shallow is beyond me.

There’s also a levelling system, but all it really adds are a third-person view while hacking or building, and turrets to your engineer’s arsenal. It’s as shallow as the all-male character creation. The Elderscrolls series – created by Bethesda – gave each race (Argonian, Khagit, Wood Elf, Red Guard, Imperial etc.) and sex added benefit and a balanced advantage over the others. Your character in BRINK can look like an insane, dishevelled hockey player with green hair, but what does that really add to the game?

In one multiplayer match, the squad I belonged to was tasked with destroying a pillar, retrieving a navigation computer and escorting the box, via a tank-like robot, to a nearby boat. All was going swimmingly until the other team wised up right near to the end. In order to leave the mission, our team had to hack a small control panel held within a fortress the other side had constructed. To say they were turtling is an understatement, and an unbalanced system of respanwing right next to the objective prevented us from having even a slight chance of winning the match. They all became engineers, destroyed our hack boxes and deployed turrets freaking everywhere. There were turrets, turrets everywhere, and frustration abound. It could be a matter of balance and what happened was all “part of the game’s strategy”, but even when I had changed classes, even when I used every weapon at my disposal and even when I had been rallied we still lost, badly.

Texture pop-in or popping was a huge issue while I was playing. Aesthetically, BRINK has a unique look with caricature-like, slightly racially stereotyped characters and dystopian environments. The S.M.A.R.T. system of movement allows you to move across and bypass looking at anything cool, and it might help as everything in the game is slightly blurry due to the texture loading issues. BRINK uses id Tech 4, an engine that uses MegaTextures. MegaTextures are huge texture maps that cover static environment. The texture is stored in the device media and is loaded into the game when needed. This process uses considerably less ram than other texture systems. What that means for the game is that textures will be loading constantly and environments will look consistently awful. Most of these issues are mitigated by the fact that BRINK can also be bought on the PC, which can handle the texture problems more effectively. Yet even when on the weapon customization screen, the game still has issues with loading textures quickly. It’s a small complaint and it shows the current console generation’s age.

If you want a game that’s purely multiplayer, in all sense of the term, then play BRINK. The meagre story, choppy, lag-filled online play, texture popping and annoying Brother Chen were enough to take me to the BRINK of insanity. Sorry, that pun was waiting to happen. If you still have plans to buy get it on the PC to avoid graphical issues. If this article has dissuaded you skip BRINK unless Splash Damage offers up some story-filled and gender-equal downloadable content.

The meagre story, choppy, lag-filled online play, texture popping and annoying Brother Chen were enough to take me to the BRINK of insanity.
REVIEW SCORE
4
File Under: Microsoft, Xbox