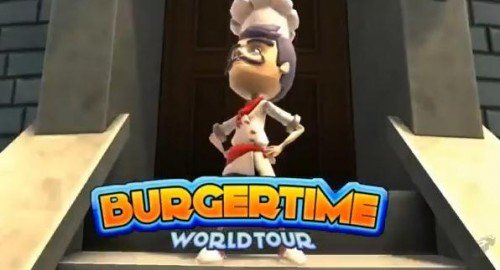 Having grown up a fan of the original Burgertime game for NES, I was understandably excited earlier when it was announced that a newly updated, HD graphics version of the game would be released later in the year. When it finally was available for purchase online, I jumped at the opportunity, excited to play an updated version of what my inner child remembers and considers a classic. Unfortunately, Burgertime: World Tour isn’t a complete success, and one of the more anticipated games ends up being much more than simply a letdown.

To say that the original game was light on story would be far too kind, but when it was first created story wasn’t necessary if the gameplay was enjoyable. This new version of the game tries to give the game a story concept, and I appreciate the attempt despite it being unneeded. You’re a caricature of an Italian-looking Chef, who must combat other Chefs from different countries, including their unique ingredients. You travel across four different “worlds” with a total of 50 levels to complete, including some difficult boss battles. The gameplay is enjoyable, as it manages to carry over the basic concepts from the original game quite smoothly. As giant ingredients try to kill you, you must jump around them or pepper-spray your way through them so that you can run over burgers, cheese, lettuce and buns to create the required amount of hamburgers for the level. Jumping is a big addition for the game, as it wasn’t an option in the original game, leading to sad deaths which seemed to happen in slow motion as you realized you were out of pepper-spray and watched an enemy hot dog slowly kill you as you stood helplessly before it.

The game isn’t that hard to beat, as to progress to the last level you simply have to finish each level regardless of how many lives or how much time it took to complete. But the game has replay value, with challenging trophies/achievements to complete, ranging from earning five stars for each of the 50 levels, or finishing each of the 50 levels without losing a life (not in a row, though, as each playthrough of a level if counted separately).

The graphics are sharp and crisp, and whereas the original NES game featured a black screen with a grid in the middle that you ran around on, this new game boasts bright colours and a generally fun visual sense of style. However, all of the colours and characters on the screen can prove to a bit busy at times, as an enemy ketchup spray starts to meld into the background, making it harder to focus on it and avoid it (yep, this is definitely an odd game to describe without visuals).

With all of this fun gameplay, bright colours and good graphics, what’s my major issue with this game, you might ask? The lack of a good multiplayer mode is this game’s biggest problem, especially after the original marketing and presentation earlier this year. The multiplayer mode is included, but it doesn’t feel very well thought-out or designed, as instead of having a face-off mode on separate grids, you fight against your opponent with only one burger between the two of you, making it less enjoyable as a competition, as well as unnecessarily complicated. The scoring issue doesn’t improve the situation, as it’s possible to wait at the bottom of the grid for an opponent to finally get the top bun to the bottom level of the grid, and just run over it and get more points for finishing the burger than those the other player garnered for making it all possible in the first place.

The first-player mode is enjoyable, competitive, and has a variety of difficult challenges to keep the player invested and interested in playing the game further. If only the multiplayer could have been better put together, because as it stands it simply isn’t as much fun as it could have been with just some simple tweaks. That being said, when I hear the start-up music, which sounds very similar to the original Burgertime theme music, my inner child gets giddy with excitement.

Unfortunately, Burgertime: World Tour isn’t a complete success, and one of the more anticipated games ends up being much more than simply a letdown.
REVIEW SCORE
7
File Under: Arcade, Indie Game, Microsoft, Platformer, Xbox