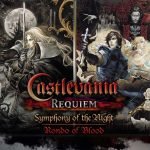 Castlevania Requiem brings two of the series’ greatest entries, Rondo of Blood (Rondo) and Symphony of the Night (Symphony), to the PS4. Whether players are looking for classic sidescrolling Castlevania challenge or to enjoy exploring a sprawling castle filled with incredible monster designs, both offer different, but equally appealing romps. Just don’t expect anything more than that from this collection.

The Castlevania series is a complex one. It represents excellent, if ruthless, sidescrolling challenge, but also exploration and adventure. Gloomy, yet beautiful 3D action. Whipping arcade play. The series has spread its slew of monstrosities across multiple platforms and genres, showing an endless appeal to defeating sickening beasts. Castlevania Requiem does a good job of giving players a taste of two play styles, hinting at the variety the series has to offer. With the highly-difficult Rondo and the more relaxed Symphony, it offers a pleasant variety depending on what you want from the games at a given time.

That said, the enemies have been placed to make players’ lives difficult, but not to frustrate them. Their attacks have been built to take advantage of Richter’s (the protagonist’s) movements and slow whip wind up, forcing players to factor in monster speeds and attacks as they prep their counter. It turns combat into a dance where players must weigh every aspect of their abilities, and those of the monsters, flowing with the demands of each.

Should the monsters become easy to kill, the environments, striking in their colours and states of decay, create the challenge. Their broken bridges and devastated keeps offer pits into the abyss, or mechanisms that will break beneath the inattentive, forcing players to factor these elements into their attacks as well. There is always a lot to think on as you whip through Rondo, but it rarely seems like its creators are trying to purposely agitate the player (see the SNES’ Castlevania: Dracula X to learn what that feels like).

Even with its focus on classic Castelvania play, Rondo brings in an element of exploration that offers all-new delights. Unlike its previous entries, sometimes, a drop into a pit can lead to a new path through the game, or a wall can hide an all-new stage, encouraging players pick and prod at the game’s world. It’s a lovely touch and makes for some pleasant surprises when you thought you were falling to your death.

This sense of exploration would naturally lead into Symphony. With its in-depth look at Dracula’s castle and all of its hidden places, Symphony is a dream for series fans. From its labs and colossal clock towers to its shadowy depths and inverted halls, it offers many haunted places for players to lose themselves in.

There seems to be more of a focus on wandering in this game as well, as it shows a marked drop in challenge. Not that Symphony can’t be difficult in places, but it seems to be more concerned with letting the player take in the sumptuous halls, the artwork, the architecture, and the beastly design. It wants you to soak in the gloom and the glory of this fantastic place – to savour its designs and truly take in Dracula’s home.

This sense of exploration is tied into the combat as well. Rather than stick players with a single weapon, an arsenal of varied tools lies throughout the castle, each offering a whole new play style. There are weapons that will let you decimate the game if you so choose (hello Crissaegrim), but most offer a means of customizing your play in unique ways through spells and attack styles. There’s so many to choose from, and so many to be found as rare drops from enemies, that you can fiddle with your fighting style for ages.

The monsters also offer a great deal to enjoy as well. The foes offer that same variety of attacks that will keep players thinking, but also a visual spread that just makes them appealing to look at. Each area offers a suite of neat foes, from ghostly swordsmen to stone flowers to gross land squid, all reflecting a theme and personality of a given place. They share in giving a location a certain feel and make each area feel new and interesting as its combatants add new dangers, and striking new looks to enjoy.

This enjoyability in both games is marred by blowing them up to the size of most current TVs, though. Castlevania Requiem’s pixel art is pretty, but when zoomed into, offers a blocky look that is hard to ignore. These games were built for much smaller TVs, so when they’re expanded to fit such a large screen, you can see every pixel. This is fun in some regards as it allows you to study the pixel work itself, but it doesn’t capture the beauty of these games as they were originally presented.

Castlevania Requiem also doesn’t offer anything beyond these two titles. There are some options to fiddle with control layouts for Rondo, but that’s all. Don’t expect anything on par with the Mega Man X Legacy Collection’s videos and promotional art, nor the Street Fighter 30th Anniversary Collection’s museum. It’s simply the two games, and while they’re excellent, it feels a bit like a bare-bones offering when compared to other current rereleases.

Castlevania Requiem lets players get their hands on two excellent games, so even though it offers little else, it is still a worthwhile purchase. Still, with its art style better suited to smaller screens, and with the ten-year-old Castlevania: The Dracula X Chronicles offering more content (a remade Rondo on top of these two titles) being available for Vita, Castlevania Requiem seems like it needed to be so much more.

Castlevania Requiem lets players get their hands on two excellent games, so even though it offers little else, it is still a worthwhile purchase.
REVIEW SCORE
7
File Under: Konami